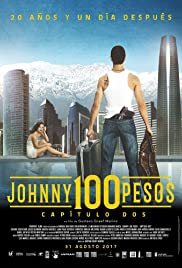 In JOHNNNY 100 PESOS, Johnny gets caught up in a robbery in modern Chile. The law officials promise fair and humane justice, but stung by recent criminal mistreatment, the film climaxes to a horrible conclusion. A gritty drama of political growing pains, this film uses violence and angst-filled sexuality to show its cynical view of change.

JOHNNY 100 PESOS opens with Johnny accidentally shooting a gun on a bus home from school. Johnny manages to get off the bus and makes his way to a video store where he nervously checks out some videos. When four suspicious looking men appear, the owner is reluctant to let them enter so Johnny pulls out a gun and assists them. A robbery begins. As the robbery takes place, the secretary is reluctant to call the police because her boss points out that they too are criminals, performing illegal currency exchange. However, the landlady finds all this activity to be very suspicious and calls the police herself. They arrive sending the thieves into a panic, and the situation gets out of control becoming more and more absurd. As police and media arrive at the scene, Johnny gets nervous and decides to romance the secretary. When anxieties mount, Johnny decides on more violence instead of succumbing to the questionable wishes of the new democratic government.

The film is a raw look at contemporary Chile with its newly formed democratic government, and how the free press and media can really manufacture havoc and sensationalism for its own material gain. It is a low budget film produced in one room, which hightens tensions yet, it is overrun with gratuitous foul language, violence and sexual scenes.