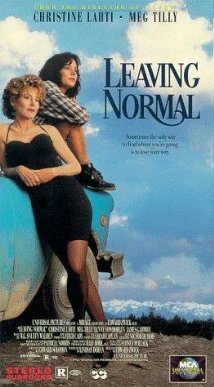 LEAVING NORMAL is the story of Maryann, a childlike waif who flees her abusive husband and hooks up with Darly, a foul-mouthed, cynical waitress, for a trip to claim Darly's inheritance in Alaska. This film is so nihilistic that it openly ridicules rational thought and the decision-making process. Foul language lewd dialogue and shallow caricatures of men also mar LEAVING NORMAL.

In LEAVING NORMAL, Maryann is a childlike waif who goes to the Western town of Normal to marry Curtis, a man with whom she has only corresponded. When he strikes her for touching his things, she flees into town, where she meets a foul-mouthed waitress named Darly who is en route to Alaska to claim a property left to her by her deceased husband. Darly and Maryann decide to hit the road together, but Darly’s GTO breaks down so they are forced to hitch a ride with two truckers, Leon and Harry. Leon and Harry are two opposite, unflattering caricatures of men. Harry is a “sensitive, poetic type;” while Leon is an insecure, though boisterous good ol’ boy whom Darly is able to exploit his by promising him sex for $100 dollars before ditching him and absconding with the money.

LEAVING NORMAL is fundamentally nihilistic. It is “freedom” taken to the extreme, rejecting even logical decision-making to avoid making bad choices. Ultimately, the spunky camaraderie and penetrating human analysis that LEAVING NORMAL tries to attain is shipwrecked by its nihilistic philosophy, not to mention its foul language and lewd dialogue. Not even the beautiful aurora borealis in Alaska can redeem these perverse interior landscapes.