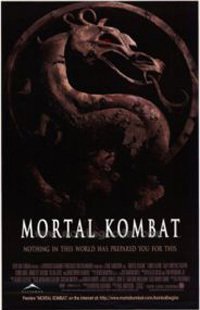 MORTAL KOMBAT is a special effects laden film, playing off the popular video game series. Once a generation there is a Mortal Kombat tournament where the evil forces from one dimension fight the mortals of a dimension they want to take over. Violent, but bloodless, this film includes New Age false religious doctrines to convey its fantasy world.

In MORTAL KOMBAT, Shang Tsung is a demon who has been around for 10,000 years. His power comes from the souls of vanquished warriors. Once a generation there is a Mortal Kombat tournament where the evil forces of one dimension fight the mortals of another dimension. If they win 10 consecutive times, then that world falls and is subjected to the tyranny of the evil emperor. Lui Kang is joined by Sonya Blade, a CIA cop-type on the trail of her partner’s killer, Johnny Cage, an unrespected martial artist, and Rayden the god of thunder and lightening. They come together to fight Shang Tsung and his minions Scorpion, Reptile and Sub-Zero, his pawn Kano, and prince Goro, the undefeated champion.

One of the underlying themes is that “every mortal is responsible for his own destiny.” The idea is to rely on your own strength as opposed to divine forces. The premise that souls can be captured and held by demonic forces is New Age, if not occultic. It is a very well done film and the violence is kept bloodless, but parents should be very wary about allowing younger teenagers to ingest some of the false doctrines which are overshadowed by the special effects, music and fight scenes.