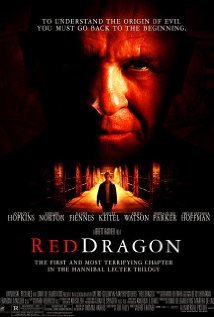 RED DRAGON is the first novel in the Hannibal Lector trilogy. In 1980, forensic psychologist Hannibal Lector, played by Anthony Hopkins, is captured in a bloody showdown with FBI agent, Will Graham, played by Ed Norton. Will retires to care for his family, but his superior, Mr. Crawford, talks him into coming back to solve some gruesome crimes where entire families were killed, the women raped, mirrors were broken, and pieces from the mirrors were placed in the dead people's eyes. The murderer, Francis Dolarhyde, played by Ralph Fiennes, thinks he is the incarnation of the Red Dragon figure from William Blake’s work and from the book of Revelation. Can Will stop him before the Red Dragon kills Will’s family?

RED DRAGON is big budget. Anthony Hopkins is over-the-top. Ed Norton is too laconic. Philip Seymour Hoffman is superb as a sleazy tabloid reporter. There are too many plot holes. The violence and references to cannibalism are intentionally grotesque and sensational. The Bible quoting is focused on the satanic. There is no hint of redemption. The ending is predictable. RED RAGON is neither good entertainment, nor good for one’s soul

RED DRAGON is the first in the notorious Hannibal Lector trilogy of novels. Since this is such a popular movie franchise, extensive background information is not needed by, nor given to, the audience.

The movie opens in 1980 at a classical concert with forensic psychologist Hannibal Lector, played once more by Anthony Hopkins, hungrily staring at a member of the New York City symphonic orchestra. That night, Hannibal cooks some special dishes for the board of the symphony. They comment that it’s too bad one of the musicians is missing. One snooty board member asks for Hannibal’s recipe. He responds that she doesn’t want to know.

Later that evening, Hannibal’s FBI colleague, Will Graham, played by Ed Norton, shows up to discuss the case of some mutilated corpses. During the conversation, Will realizes that the Dr. Lector is probably the cannibal who has been maiming these murder victims. They struggle. Lector stabs him and Will drives some arrows into Lector. Both survive and Lector is sent to prison. Will retires from the FBI and moves his family to Marathon, Florida.

Soon Will’s superior, Mr. Jack Crawford, played by Harvey Keitel, shows up at his door to discuss another brutal series of murders. An entire family in Alabama, and another in Atlanta, were killed, the women raped, the mirrors in the houses were broken, and pieces from the mirrors were placed in the dead people’s eyes. Crawford begs Will to come back and step-by-step gets Will involved in the case.

The murderer, Francis Dolarhyde, played by Ralph Fiennes, is in communication with Hannibal. Francis fancies himself the incarnation of the Red Dragon figure from William Blake’s work and from the book of Revelation. Hannibal gets information to the Red Dragon telling him where Will’s family now lives. So the story boils down to whether Will can catch and stop this new murderer before the Red Dragon kills Will’s family.

RED DRAGON is a big budget, slick movie. The photography and music are sumptuous. Anthony Hopkins is over-the-top at times giving slightly too much comic relief. Ed Norton is laconic as the frightened FBI agent. Emily Watson is superb as Dolarhyde’s love interest. Philip Seymour Hoffman is superb as the sleazy tabloid reporter Freddy Lounds and almost redeems the movie.

Like many sequels of horror movies, there are plenty of plot holes. Such as why does everybody send their video tapes thousands of miles to be made into family movies? How does the Red Dragon get from the Midwest to Baltimore and Atlanta so quickly when he is only a poor, lowly employee at the video company? How does Dolarhyde digest the canvas of the Blake painting he’s eaten? Because of the intense action and the slick production, people will tend to miss the many plot holes, but they make for a bumpy ride.

The violence and references to cannibalism are intentionally grotesque and sensational. The filmmakers must know that several cannibalistic crimes were committed in light of the first movie SILENCE OF THE LAMBS, yet they have made no attempt to try to make these characters less enticing to susceptible youth.

There is Bible quoting in RED DRAGON, but it is focused on the satanic. There is no hint of redemption. Eventually, however, human good does triumph. The movie seems to indicate that there is a demonic realm without a corresponding recognition that there is a holy, supernatural realm governed by the God of the universe. Therefore, God is left out of the equation. Furthermore, Will spouts Freudian nonsense that Dolarhyde was once good, but made evil by his grandmother. This contradicts the reality that no man is good.

All of this philosophizing aside, the movie seemed almost paint-by-numbers. The ending is predictable. While the violence is upsetting, it is not scary. It is truly unfortunate that the public keeps on patronizing these movies. They are neither good entertainment, nor are they good for one’s soul.