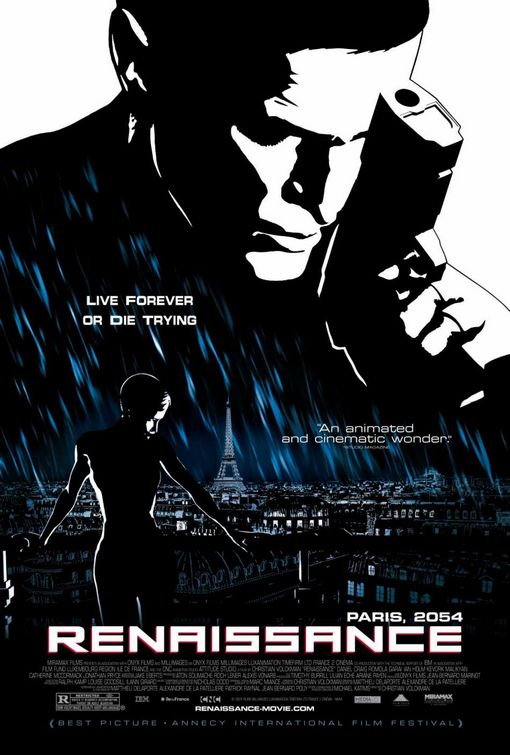 RENAISSANCE is an animated science fiction movie made in France and England about a police investigation into the mysterious disappearance of a female genetics scientist in Paris in 2054. Karas, an apparently Muslim cop known for being a loner, investigates the kidnapping of Ilona, the geneticist. He discovers that the boss where she works, a genetics technology firm selling beauty and longevity products, will stop at nothing to get Ilona back. As Karas gets closer to the truth and the number of corpses mount, his own life and the life of his new love, Ilona's sister, are threatened.

The future cityscape in RENAISSANCE is visually striking, in black and white animation. This animation also overlays the movie's live-action performances and its vivid special effects. The story ends, however, in an anti-capitalist, moral muddle that is objectionable. Also, moviegoers well versed in science fiction stories like this one probably will find this ending a bit old-hat. In the end, the hero has to commit a morally questionable act. RENAISSANCE also contains brief sexual content, upper female nudity, strong foul language, and a couple minor but telling references to the "prophet" of Islam, Mohammed.

(PaPa, B, FRFR, AcapAcap, LL, VV, SS, NN, A, D, MM) Ultimately immoral, pagan worldview, with some moral elements of finding a kidnapped female scientist before she may be killed and keeping unlimited divine-like knowledge away from flawed and greedy human beings, plus two minor but telling references to Mohammed, the "prophet" of Islam, a false religion that slanders Jews, Christians and their beliefs in God, some strong anti-capitalism with a business leader being one of the villains, and hero performs a morally questionable act at the end; 21 obscenities (including some "f" words) and three light profanities; strong action violence includes gunfights, people shot to death, man wounded, chase scenes, car crash, implied killing of pet dog, man falls through glass window and lands on street down below, man beaten, man and his newborn son threatened, and hero shoots someone in the back and lies about it; briefly depicted fornication when police bust into apartment, implied fornication, kissing and naked man stands in pool surrounding by cooing naked women; shots of upper female nudity and some upper male nudity; alcohol us; smoking; and, lying, kidnapping, hero feels he must do some morally questionable acts, hero disobeys orders, greedy businessman, .

RENAISSANCE is an animated science fiction movie made in France and England about a police investigation into the mysterious disappearance of a female genetics scientist in Paris in 2054. Visually striking, the movie could use a stronger plot, a more clearly stated premise and a more positive moral and theological philosophy or worldview.

The movie is animated in eye-popping black and white over some live-action performances and some computerized special effects. The story opens with the female scientist, Ilona, being rebuffed by a shady bartender who wants more money for something he stole for her. As she leaves the disco and goes to her car, Ilona is kidnapped by an unknown assailant.

Stepping into the case is a police detective named Karas, an apparently Muslim cop known for being a loner. Karas gets the job done, however, so he’s the best detective on the force.

Karas investigates Ilona’s disappearance. He discovers that she was working on something called the Renaissance Project before she was kidnapped. Paul Dellenbach, vice president of the place where she works (the Avalon company, a genetics technology firm selling beauty and longevity products), will stop at nothing to get Ilona back so she can finish the Renaissance Project. Helping Karas is Ilona’s sister, Bislane, who is understandably worried about her sister and also works for Avalon. Karas also gets help from his Arab childhood friend, Farfella, who’s now a hard-nosed, lustful gangster.

Every witness Karas digs up seems to turn up dead. The trail to Ilona’s whereabouts eventually leads to Dr. Muller, Ilona’s mentor, and a genetics research program that Dr. Muller was working on years ago, before the program ended in a well-publicized disaster in 2006. As Karas gets closer to the truth, his own life and the life of his new love, Bislane, are threatened.

The future cityscape of Paris is rendered in a fantastic, stylish way in RENAISSANCE, although the animation flattens out the actors’ facial expressions, as in A SCANNER DARKLY, which came out earlier this summer. A complex animated network of new skyscrapers, roads and walkways (some of them pictured in clear glass) overlay centuries-old architecture. A few chase scenes and action sequences within this labyrinth add some excitement. The story ends, however, in an anti-capitalist, moral muddle that is objectionable. Also, moviegoers well versed in science fiction and police detective stories like this one probably will find the ending a bit old-hat. In the end, Karas has to commit a morally questionable act not only to stop the evil capitalists of Avalon but also to stop a character who’s out for scientific glory at the supposed expense of others’ freedom. The anti-capitalist content is mitigated, however, by the fact that Avalon seems to be some sort of unregulated, uncontrolled corporate monopoly.

RENAISSANCE contains brief sexual content, upper female nudity and strong foul language. There are also two brief, but important, references to “the Prophet” of Islam and the Islamic god. Of course, these are references to the founder of Islam, Mohammed. The Islamic god, as presented in the Koran, the religious text of Mohammed and Islam, is a god of slander and hatred toward Jews and Christians. The facts of history and a cursory, but objective and fair, reading of the Koran, the book allegedly written by Mohammed, show that Mohammed was an malevolent, misguided man who taught many falsehoods about God, about the Jews and their history, about Jesus Christ, about the Christian description of God, and about Christians and Christianity. Mohammed also was a murderer and a war-monger who enslaved some of the women and children of the men and tribes he fought. And, the Koran contains several morally muddled passages which are so badly written that they have led many people calling themselves Muslims to murder peaceful Jews, Christians and civilians, not to mention Hindus, Buddhists, pagans, and atheists. Thus, Mohammed, the Koran and Islam have provoked many people calling themselves Muslims to murder and enslave Jews in the Middle East down through history, to violently conquer Christian-run cities in the Middle East like Jerusalem and Antioch during the Middle Ages, to murder Christian pilgrims to the Holy Land, to murder civilians in airports and on airplanes in the last 40 years, to take peaceful people in peaceful embassies hostage, to blow up embassies overseas, to murder and maim civilians in the streets of Israel, and to murder 3,000 peaceful people on airplanes and in New York City on 9/11. Making Islam even more evil and deadly is the way many Muslims combine it with fascism or Marxist-Leninism to produce a hyper-phobic reaction against the United States, Western Civilization and democratic capitalism and the freedoms and values they have created.

The movie RENAISSANCE itself doesn’t teach all of these awful things; it only has two relatively vague references promoting Mohammed and his false teachings about God. In two scenes, Karas tells his childhood friend, “May the Prophet be with you,” and they exchange a typical Muslim greeting in Arabic about Allah. These references are vague enough and brief enough not to deserve angry condemnation or denunciation. Especially since the movie’s Muslim hero doesn’t seem to be otherwise motivated by Islam. Such references are problematic, however, particularly in light of the recent riots in France by young, misguided Muslims whose religion and culture can’t get along in modern Europe, much less in a culture founded on Jesus Christ and his teachings.

Ultimately, only the Gospel of Jesus Christ, preached in a gentle, loving and kind, but firm, manner, can save people from the false, vile “religion” that is Islam. This Gospel is the true “Religion of Peace.” It is also the True Religion of True Love. And, it has been confirmed historically and empirically by the miracles that Jesus Christ performed.

These miracles were seen by hundreds of eyewitnesses, including the apostles that Jesus Christ appointed to tell people about His Gospel. Despite the pain of imprisonment, torture and death, these apostles never wavered from telling their story and preaching this Gospel after Jesus ascended into Heaven to rule. They also wrote down what Jesus did and taught in various historical books and public and private letters. And, they befriended one man, named Luke, who not only reported what they and others told him about what Jesus did and what He taught (in the Gospel of Luke), but also reported what some of them preached and did after Jesus rose from the dead and returned in bodily form to Heaven (in the Book of Acts). Luke and the apostles are thoroughly reliable reporters and eyewitnesses. They were the first Christian historians and journalists, and there is every good reason to believe that what they wrote is completely factual and true. Armed with this Gospel, we can bring truth, love, joy, justice, peace, self-discipline, and goodness to the entire world, including the areas where the False Tyranny of Islam now rules.