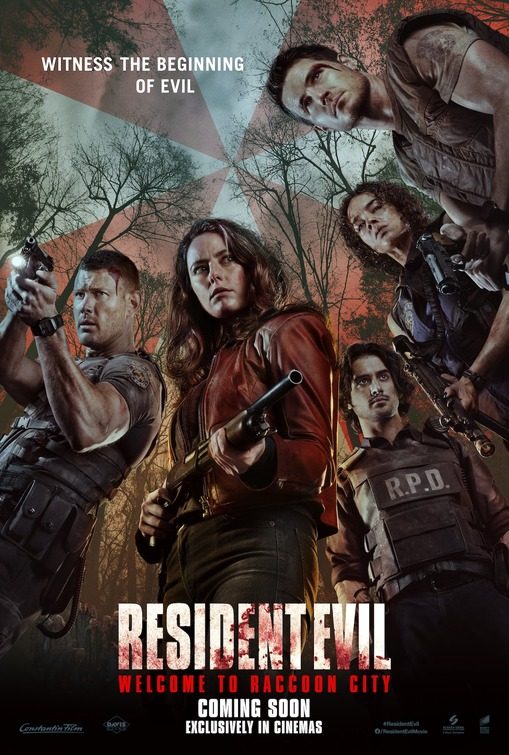 RESIDENT EVIL: WELCOME TO RACCOON CITY is an action horror movie. A young woman, Claire, returns to Raccoon City to see her estranged brother, Chris, a young police officer. They grew up in an orphanage in the city, but Claire ran away years ago as a teenager. Claire tells Chris she’s found some disturbing information about the large pharmaceutical conglomerate running the town. However, her brother doesn’t listen because the corporation runs the town and pays his salary. Eventually, Claire, Chris and some other characters are fighting off zombies created by the drug company and fighting an evil scientist trying to escape with all the company’s experimental drug vials.

(B, Acap, PP, LLL, VVV, S, N, A, M)
Dominant Worldview and Other Worldview Content/Elements:
Light moral worldview in an ultraviolent action horror movie where several people fight zombified humans created by a large, evil drug conglomerate’s bio-weapons experiments and an evil scientist who transforms into a literal monster, and heroic police officers are among the people fighting the evil antagonists, but one of the officers is loyal to the drug company
Foul Language:
At least 103 obscenities (including many “f” words), 19 strong profanities and five light profanities
Violence:
Extreme bloody, gory violence involving zombies includes zombies with bloody wounds often attack people, people shoot many zombies, people sometimes only wound zombies, but they usually are able to kill them with gunshots to the head, a woman is shot dead, explosions, heroes shoot at human monster but he’s injected himself with a virus with regenerative properties, etc.
Sex:
Some light sexual innuendo in a bar
Nudity:
Brief upper male nudity in one scene
Alcohol Use:
Some alcohol use
Smoking and/or Drug Use and Abuse:
No smoking or drugs; and,
Miscellaneous Immorality:
Evil scientist has a wife and daughter but he doesn’t seem all that concerned about their welfare, the large corporation in the movie is corrupt, evil scientist says he’s doing “God’s work,” but he doesn’t explain what he means by that comment, and human beings, including children, are used as guinea pigs in bio-weapons research.

RESIDENT EVIL: WELCOME TO RACCOON CITY is a reboot of the popular video game and movie series where a pharmaceutical company’s secret experiments on humans have transformed its patients with a zombie virus that’s started to infect a whole town. RESIDENT EVIL: WELCOME TO RACCOON CITY is an intense, scary, sometimes creepy, action horror movie, with heroic characters fighting evil, but it has an excessive, unacceptable amount of bloody violence and strong foul language.

A young woman, Claire, returns to Raccoon City to see her estranged brother, Chris, who’s a young police officer. They grew up in an orphanage in the city, but Claire ran away years ago as a teenager (the movie features some flashbacks to their time in the orphanage, which slowly reveal why Claire ran away). Claire tells Chris she’s found out some disturbing new information about the Umbrella Corporation, the large pharmaceutical conglomerate running the town. However, her brother doesn’t want to listen to her concerns because the corporation runs the town and pays his salary.

Later that night, a report comes into the police station that a possible murder has taken place at the mansion of Oswald Spencer, the man who founded Umbrella and built Raccoon City. The police chief sends two police officers to investigate, but something happens to them, and the chief can’t reach them on the radio. So, the chief sends Chris and two other police officers in the police helicopter to check on the two cops.

The sheriff, who knows more than he’s telling, decides he’s seen enough and tries to drive out of town. He leaves a rookie cop, Leon, in charge of the station. However, the sheriff encounters a roadblock set up by Umbrella to make sure no one leaves the city.

The police chief returns to police headquarters. Claire appears and helps the chief and Leon kill a zombie in the parking structure. They decide the only way out of Raccoon City is to make their way to the Spencer mansion and fly the police helicopter out of the city. However, they have until dawn to escape, because that’s when the Umbrella Corporation plans to blow up the entire city, including its underground labs.

RESIDENT EVIL: WELCOME TO RACCOON CITY is an intense, scary, sometimes creepy action horror movie. Claire, Chris and most of the police officers are portrayed as heroic characters. They are accompanied by Chris’ girlfriend, Jill. In the movie’s second half, they run across one of the Umbrella Corporation’s head scientists, who has his own evil agenda. When he attacks them, his wife dies during the fighting, but they save his daughter’s life.

Despite the heroics, however, WELCOME TO RACCOON CITY could use more heart. It also contains excessive foul language, including multiple strong profanities and many “f” words. Of course, the movie also has the typical glory, bloody violence of an R-rated zombie movie. At one point, the evil scientist says he’s doing “God’s work,” but the movie never explains what he means by that remark. RESIDENT EVIL: WELCOME TO RACCOON CITY is excessive and unacceptable.