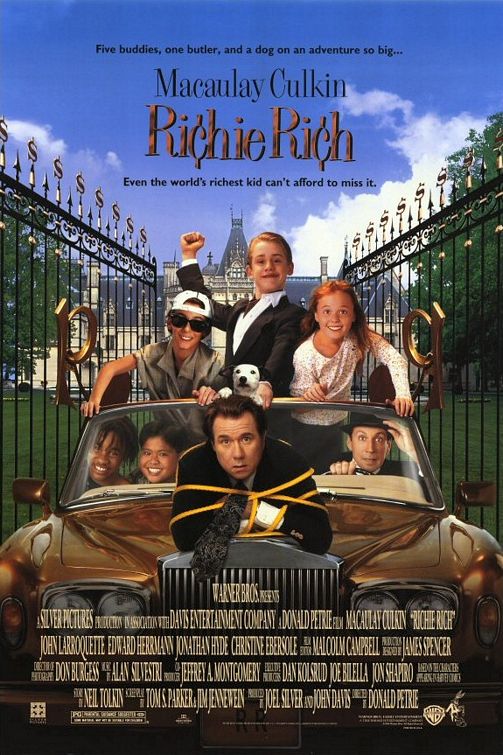 Warner Bros. serves up a delightful translation of RICHIE RICH from the comic strip to the big screen in their new film starring Macaulay Culkin. Children and parents alike should enjoy its involving story, lovable characters, charming sense of humor, and the way that good wins in the end.

(B, L, V, M, NA) Biblically moral worldview in which a family strives to be good stewards of their blessings, shares with others & places more value on family unit than on money; 1 mild obscenity, 1 exclamatory profanity & 2 mild vulgarities; some action violence & fist fighting; two characters plot to kill the Rich family & seize their wealth; and, brief allusion between adults to the signs of the zodiac, as in "what's your sign?"

Warner Bros. serves up a delightful translation of RICHIE RICH from the comic strip to the big screen in their new film starring Macaulay Culkin. Richie Rich, a boy who has everything, lives contentedly until an excursion into a blue collar neighborhood reveals to him that he does not possess: genuine friends. Richie’s unflappable valet, Cadbury, bribes a group of ragtag children to spend a day with Richie. Their initial hesitancy to befriend Richie disappears as they discover that he enjoys the same things they do. When his parents’ plane goes down over the Atlantic Ocean, he needs the children’s help to find his mom and dad, to run the company and to gather evidence against executive Lawrence Van Dough, whom he suspects responsible for the plot against his parents.

RICHIE RICH consistently conveys the message that it is not what you have, but rather how you respond to others that matters. In scene after scene, the Riches communicate their devotion to one another. Also, the Riches give generously to establish shelters, hospitals and new companies to be owned by their employees. In a biblical sense, they strive to be good stewards of their blessings. RICHIE RICH is an enjoyable and clean movie. Cleverly structured and well directed, the movie engages the viewer in its adventure and humor. Macaulay Culkin and Jonathan Hyde perform superbly.