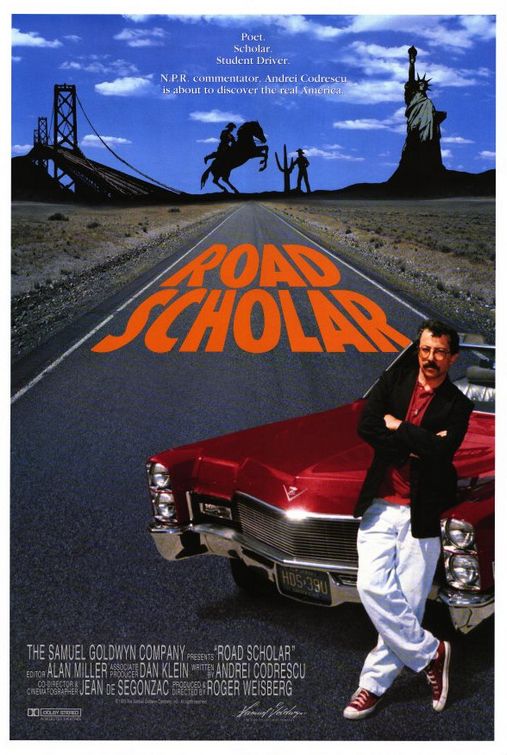 (NA, M, B) Many individuals interviewed by Andrei Codrescu reveal New Age and other philosophies, but they are not condoned. Also, people in Las Vegas at gambling tables interviewed. The film is actually patriotic as Codrescu trumpets American democracy.

In the documentary ROAD SCHOLAR, narrator and Romanian poet Andre Codrescu says he has two claims to fame: he was born in Transylvania, and he doesn’t drive a car. However, he learns to drive and travels from New York to San Francisco interviewing what seem to be the most “eccentric” people he can find such as: a punk rock band consisting of senior citizens; a woman who buries a car in her front yard as a form of social protest; all kinds of New Age enthusiasts (their beliefs are not condoned); a rancher who displays his genetically engineered cattle; and, even the poet Allen Ginsburg to whom Andrei came in 1966 to present his “dissident poet credentials.”

It is impossible not to enjoy this movie. The only drawback is that some of the people Andrei speaks with on his travels are so weird that the viewer is apt to think: “Enough of this nut! Go on to somebody else!” Then, we meet someone equally bizarre. Andrei spends an inordinate amount of time with adherents of New-Age beliefs. He also visits an Amish-type Christian community and lets all of his interviewees speak for themselves. Andrei was one of the “last surviving Jews in his ghost-filled medieval village” and says he has no desire to go back there. ROAD SCHOLAR is a documentary ode to the United States, and is unusual, consistently funny and highly recommended.