SCATTER MY ASHES AT BERGDORF’S

"The High Price of High Fashion" 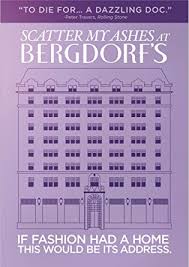 SCATTER MY ASHES AT BERGDORF’S is a fascinating documentary about the famous store in New York City. Interviews with executives, floor salesmen, buyers, designers, and famous customers reveal the world of high fashion. An outfit may run $60,000 and a pair of shoes $6,000. Bergdorf shoppers have included Jackie Kennedy, Michelle Obama, Cher, and John Lennon (who bought 80 fur coats). Bergdorf’s is the place to be if you’re a clothing designer. The store features clothing collections by name, almost as if each designer had a store within the store.

The title to SCATTER MY ASHES AT BERGDORF’S comes from a magazine cartoon, which suggested that Bergdorf’s is the “heaven” of retail. While the movie makes Bergdorf’s look amazing, Heaven will be so much better. You can’t buy salvation or eternal life at a fancy store. Jesus Christ paid for it on the Cross. That said, SCATTER MY ASHES is very pro-capitalist, but with some pagan attitudes stressing pride, snobbery, and arrogance. It also has brief crude language. So, MOVIEGUIDE® recommends a degree of caution for SCATTER MY ASHES AT BERGDORF’S.

(PaPa, CapCapCap, B, L, S, MM) Strong mixed pagan worldview where self worth is sought through expensive high fashion, with a very strong pro-capitalist, moral presentation of product design and retail sale; one obscenity, one “for Christ’s sake,” one “Oh, my God”; no violence; a sexual reference; no nudity; and, pride, snobbery, arrogance.

SCATTER MY ASHES AT BERGDORF’S is a fascinating documentary about a very exclusive high fashion store in New York City, Bergdorf Goodman. Strongly pro-capitalist, it reveals a world where self worth is, in part, measured by the high fashion you can afford to buy.

The documentary interviews store executives, floor salesman, buyers, designers, and famous customers in presenting the world of high fashion. An outfit may run $60,000 and a pair of shoes $6,000. Bergdorf shoppers have included Jackie Kennedy, Michelle Obama, Cher, and John Lennon (who bought 80 fur coats). The store was mentioned as the place to find a rich husband in the 1953 movie, HOW TOI MARRY A MILLIONAIRE starring Marilyn Monroe.

Bergdorfs is the place to be represented if you’re a clothing designer. The store features clothing collections by name, almost as if each designer had a store within the store.

In the course of the movie, viewers see David Hoey working throughout the year preparing elaborate whimsical displays for Bergdorf’s Christmas windows. What’s nice is that he makes a sincere effort not only to be “high brow” but to make displays that delight children. The amazing finished windows are revealed the end of the movie.

One of the more interesting characters in the movie is Bergdorf fashion consultant, Betty Halbreich, who serves as a “retail therapist” for famous clients. Working in sales at Bergdorfs is on commission, which can generate $500,000 in a year, but the movie makes it clear that you must “get the required numbers.”

Apparently, economic downturns for average Americans don’t profoundly impact Bergdorfs. What did was Bernie Madoff, the Wall Street guru convicted of fraud. Several regular customers lost their ability to shop at Bergdorfs after being scammed by Madoff.

Also fascinating to watch is Linda Fargo, a Bergdorf buyer who studies the collections of designers looking for fresh new designs for the store. She sees clothing as both an art form and an emotional experience. Watching her deal with designers gives one a greater appreciation for the clothing even on the rack of Walmart. In fact, some of Bergdorf’s most famous designers are let go because they begin designing for retail chains serving the general public.

The title SCATTER MY ASHES AT BERGDORF’S came from a New Yorker magazine cartoon, the message of which is that Bergdorfs is the “heaven” of retail. While the movie does make Bergdorf’s look like an amazing store, the real Heaven will be so much better. Just imagine what amounts to wealth beyond measure in a culture where there is no pride, arrogance, or selfishness. Better yet, you don’t get to Heaven because you have worldly wealth. You can’t buy salvation or eternal life at Bergdorf’s. Jesus paid for it on the cross. It has already been purchased for the poorest person on earth. While you can’t buy it, it’s a gift from God you must accept.

SCATTER MY ASHES also has some brief foul language and a sexual reference. So, some caution is advised.

Rent or Buy SCATTER MY ASHES AT BERGDORF’S: