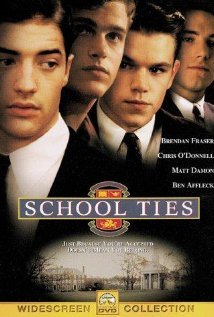 In SCHOOL TIES, a Jewish teenager receives an athletic scholarship to attend St. Matthew's Academy during his senior year of high school. With a different faith and economic background, the outsider comes face-to-face with anti-semitism and religious hatred. In spite of a sensitive lead character, SCHOOL TIES reduces Judaism to mere tradition rather than a heart-felt belief.

In SCHOOL TIES, a Jewish teenager receives an athletic scholarship to attend St. Matthew’s Academy. Because of his different faith and economic background, the outsider comes face-to-face with anti-semitism and religious hatred. The story begins in 1955, as David Greene arrives at the St. Matthews, a boarding school in New England. His coach asks him not to discuss his athletic scholarship, or faith with anyone. Seeking acceptance, David abides by the coach’s request. He hides his Star of David and swallows his pride when the guys slander Jewish people. The anti-semitism explodes when Charlie discovers that David is seeing his girlfriend, a demure blond who appreciates David’s differences. A showdown pits David against his peers for the honor of St. Matthews.

Although SCHOOL TIES captures the tension of boarding school life, the audience doesn’t know enough about the characters to become interested in them. In fact, the only likeable person is David. However, instead of a heart-felt belief, David’s Judaism is reduced to mere tradition. Therefore, SCHOOL TIES leaves us wondering why David upholds Judaism in the face of opposition. Also frustrating is the movie’s ending, which offers little resolution to the issues at hand. Overall, SCHOOL TIES is a superficial attempt to tackle the problem of anti-semitism.