"Time To Grow Up" 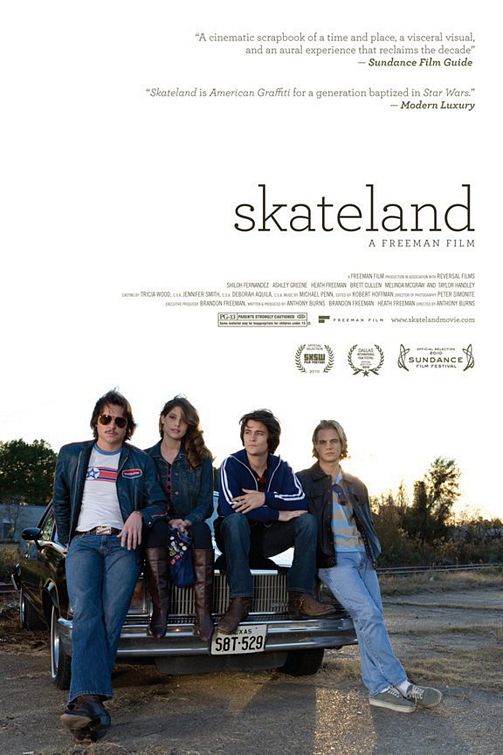 SKATELAND is an independent, coming-of-age movie that hearkens back to the early ‘80s and the heartland of America. Ritchie Wheeler refuses to grow up. Although he’s a talented young writer, Ritchie would rather spend his days and nights hanging out with his aging high school buddies at the local lake, swimming, drinking, smoking, and sharing tales of sexual exploits. Ritchie learns his parents are divorcing. When he also gets news that the local roller-skating rink where he’s worked since a teenager is closing, Ritchie must confront reality. His best friend Brent’s younger sister, Michelle, pushes Ritchie to leave their tiny hometown and head to college to pursue his writing career. As their romance blossoms, Ritchie must decide to take charge or continue to indulge in the fading memories of his past.

SKATELAND has high production values, but the plot moves too slowly in the first half. The movie also has a lot of content requiring extreme caution, including much foul language, crude dialogue, promiscuity, excessive alcohol abuse, marijuana smoking, and a major theme involving adultery. Media-wise viewers will want to seek out much more uplifting entertainment than SKATELAND offers.

(PaPa, Cap, H, Fe, Ho, LLL, V, SS, N, AAA, DD, MMM); Strong, mixed pagan worldview with one brief comment character makes about preferring Capitalism over Socialism, mention of studying Nietzsche, woman breaks free from her marriage to pursue her feminist dreams, some derogatory homosexual name-calling and one mild homosexual innuendo; 31 obscenities, two profanities; violence includes vandalism, bullying, a car chase leads to a violent crash that leaves one man dead, guy beats up bullies with a stick and chokes one guy with his skate; strong sexual content includes a lot of sexual dialogue throughout, guy brags about sexual exploits including adulterous affair, mother divorces husband because she’s having an affair and admits to several affairs throughout their marriage, description of a swingers party, unmarried kissing throughout, heavy petting in one scene, implied fornication in several scenes, young man catches his mother kissing another man in a bar; upper male nudity, women in bikinis, young woman in bra, man is shown from behind as he flashes people in front of him; strong alcohol use throughout, drunkenness depicted in multiple scenes, drinking and driving in several scenes; cigarette smoking in nearly every scene and marijuana use is depicted; and, lying, disrespect to parents, partying, and bullying.

SKATELAND is an independent, coming-of-age movie that hearkens back to the early ‘80s and the heartland of America as a young twentysomething is forced to take hold of his future after the local skating rink where he’s worked since he was a teenager is closing.

Ritchie Wheeler (Shiloh Fernandez) refuses to grow up. Even though he’s a talented young writer, Ritchie would rather spend his days and nights hanging out with his aging high school buddies at the local lake, swimming, drinking, smoking, and sharing tales of sexual exploits. His best friend and hero is Brent (Heath Freeman), who has returned to their hometown after a failed career on the motocross racing circuit.

When news that the local roller-skating rink where Ritchie has worked since he was a teenager is closing and when he learns his parents are getting a divorce, Ritchie is confronted with the reality of the pains of the adult world. As Ritchie’s idyllic life continues to crash down around him, Brent’s little sister, Michelle (Ashley Greene), who’s been in love with Ritchie for years, pushes Ritchie to leave their tiny hometown and head to college to pursue his writing career. As his romance with Michelle blossoms, Ritchie must decide if he will take charge of his future or continue to indulge in the fading memories of his past.

SKATELAND has high production values for an independent release, but the plot moves incredibly slowly through the movie’s first half. Not until the crisis point of the second act does the movie hit any of its major plot points. Instead of plot for the first half, the movie relies on picturesque settings and relational dynamics between the aging high school buddies, especially Ritchie and Brent. This proves detrimental to the story. There are some brilliant directorial choices, especially long scenes with no edits or cuts, which gives the actors plenty of room to explore their characters in emotionally charged moments.

The movie has a lot of content, however, that requires extreme caution. It contains a strong mixed pagan worldview with a lot of foul language and some violence, including a major car crash that kills a man. It has an over-abundance of strong sexual content including implied fornication, strong sexual dialogue throughout and a major theme of adultery. There is also strong alcohol use throughout, drunkenness depicted, drinking and driving in a few scenes and smoking in nearly every scene of the movie, as well as some marijuana use. Finally, SKATELAND contains very strong miscellaneous immorality such as disrespect of parents, a negative view of marriage, lying, and bullying.

With its plodding storyline, immorality and strong mixed pagan worldview, SKATELAND ultimately is a forgettable independent movie with too much cautionary content, so media-wise viewers will want to seek out more uplifting entertainment.