SPY KIDS: ALL THE TIME IN THE WORLD 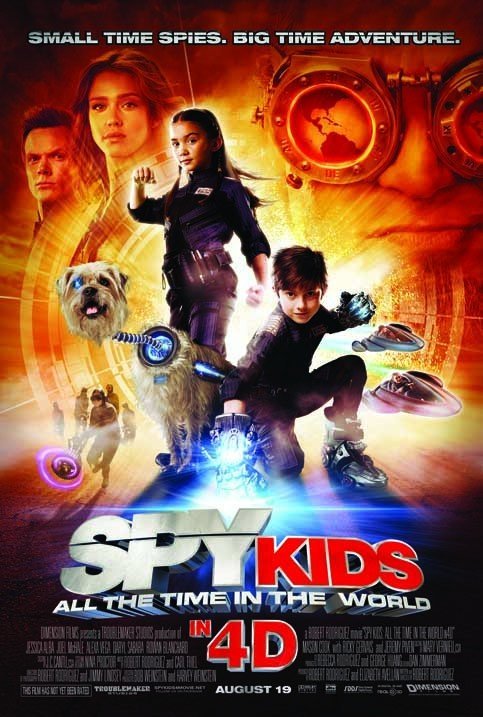 The new SPY KIDS movie, ALL THE TIME IN THE WORLD, breathes new life into the franchise. Jessica Alba plays retired spy Marissa Wilson, the aunt of the spy kids in the previous movies, who have grown up. Because she’s retired, with a new baby no less, Marissa hasn’t told her husband and her two stepchildren that she was a spy. Marissa is suddenly called back into action when a new villain called the Timekeeper appears. The Timekeeper is angry at the world, especially families, for squandering time and is trying to steal it back. Marissa’s two stepchildren become the new Spy Kids when their stepmother gets in trouble and needs their help.

SPY KIDS 4 is fantastic fun. Robert Rodriguez, the creator of the SPY KIDS franchise, reinvents his series by adding new gags and new gadgets. He also creates a clever plot twist in the third act that adds some deeper layers to the movie’s theme of spending more time with your family. SPY KIDS: ALL THE TIME IN THE WORLD is well worth seeing, even if you and your family have seen all the other SPY KIDS movies.

(BBB, C, L, V, M) Very strong moral, pro-family worldview with redemptive elements where even the villains have something good in them and families are encouraged to make time for one another; no obscenities, two “My God” light exclamatory profanities, jokes about baby passing gas, and boy loses his lunch in bags and flings bags at villains chasing him and his sister; light action violence such as fighting, ball bearings make people fall down, chase scene in flying machines with rocket attacks, girl pulls prank on her stepmother and goop falls on stepmother although girl tried to stop her prank at the last minute, punching, shots of characters falling; no sex; no nudity; no alcohol; no smoking; and, girl doesn’t get along with her stepmother and their father is a workaholic.

The new SPY KIDS movie, ALL THE TIME IN THE WORLD, breathes some new life into the franchise by hiring Rocky Gervais and a new cast to provide some new laughs and by adding a clever plot with an inventive ending.

The story opens with Jessica Alba as Marissa Wilson, the younger aunt of the spy kids, Carmen and Juni Cortez, who are all grown up now. Marissa is pregnant but she’s carrying out one last mission as a spy – catching Tick Tock, a villain who’s stolen the key to the Armageddon device, which can steal time. Despite her condition, Marissa is able to capture Tick Tock and put him behind bars. Since she’s retiring, Marissa has not told her new husband, Wilbur, a widower with two young twin children, that she was a spy.

One year later, Marissa is coping with their new baby and the fact that her stepdaughter, Rebecca, resents her and is always treating her terribly. Meanwhile, Wilbur, the father, is busy with his new reality show as a spy-hunting television reporter. He still doesn’t know his wife used to be a spy herself.

Rebecca and her twin brother, Cecil, are forced to put aside their bickering and work together to help their mom. They get help from their aunt, Carmen, who wants to revive the Spy Kids Division. Everything leads to a clever ending that teaches parents and children to appreciate the time they have to spend with one another.

SPY KIDS 4 is fantastic fun. It brings back the now grown-up Spy Kids from the first three movies, played by Alexa Vega and Darryl Sabara. Meanwhile, it introduces a whole new set of characters to entertain viewers. Perhaps the funniest is Ricky Gervais, who plays the voice of the new mother’s dog, who’s really a robot. Rounding out the cast are Jessica Alba and Joel McHale as the new parents, Rowan Blanchard and Mason Cook as the new Spy Kids, Rebecca and Cecil, and versatile Jeremy Piven, who transforms himself to play both the Timekeeper and Tick Tock.

Filmmaker Robert Rodriguez, the creator of the SPY KIDS franchise, reinvents his series by adding some new gags and gadgets. He also creates a clever plot twist in the third act that adds some deeper layers to the movie’s theme of spending more time with your family.

SPY KIDS: ALL THE TIME IN THE WORLD is well worth seeing with your family, even if they have seen all the other SPY KIDS movies.

Watch SPY KIDS: ALL THE TIME IN THE WORLD: