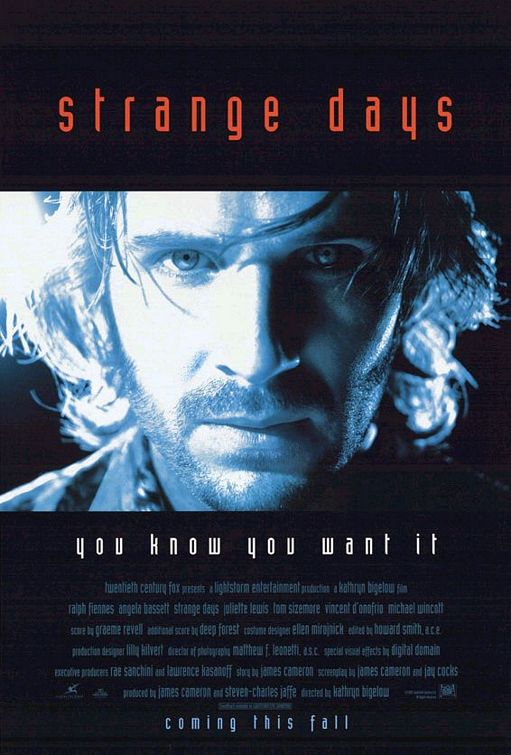 It is December 30, 1999, and these are very STRANGE DAYS in Los Angeles, a city out of control in these last few hours before the year 2000. Lenny Nero runs for his life in order to bring justice to a murder where only he knows the real truth. Brilliantly conceived and fast-paced, STRANGE DAYS is marred by excessive obscenities, sex and violence.

(B, LLL, VVV, SS, NNN, M) Biblical worldview, in that even though the city is out of control with violence, people realize it is not right, a reference to the end of the world & that people better be ready to meet their Maker; 127 obscenities & 13 profanities; many killings by guns, some strangulation, rape, & beatings; three acts of virtual-reality sex; upper female nudity; prejudice & people have no concern for the results of their actions.

It is December 30, 1999, and these are very STRANGE DAYS in Los Angeles, a city out of control in these last few hours before the year 2000. Lenny Nero is an underground dealer of wireheads, where electrical wires attach into the person’s head and are connected to a disk that thereby plays right into the person’s brain. The person feels the exact feelings of the person who filmed the disk, and he seems to be right on location of the filming. A girl who used to work for Lenny is murdered, and he is given the clip of it. Lenny is determined to find her killer with the help of Mace. Along the way they discover another clip that could lead to the destruction of Los Angeles. Lenny and Mace have to run for their lives in a race against time to bring the killers to justice.

There is never a dull moment in STRANGE DAYS. Angela Bassett is excellent as Mace, and Ralph Fiennes looks perfect for the part of Lenny. It is too bad that the story has to be filled with obscenities, nudity and violence. The rape scene is especially disturbing. The truth does come out in the end, and justice is served, so at least the “bad guys” don’t win, but the story would be just as exciting without all of those unnecessary elements that certainly don’t add to the story but detract from it.