THE 7 CHURCHES OF REVELATION: TIMES OF FIRE

"Are You Ready for Christ’s Return?" 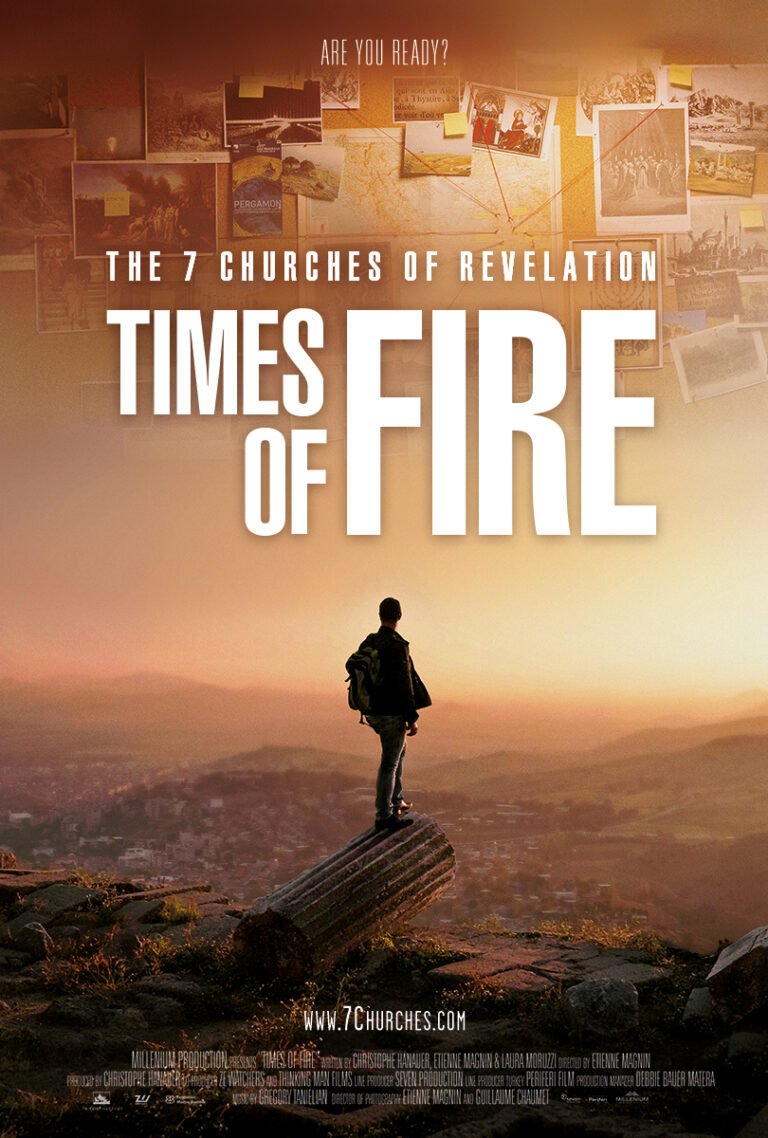 THE 7 CHURCHES OF REVELATION: TIMES OF FIRE is the first part of a series examining the Book of Revelation, in relation to the letters to the seven churches in Chapters Two and Three. Led by several scholars, viewers are taken on a journey to first century Asia Minor, now modern day Turkey. The journey begins at the island of Patmos, off the coast of Turkey, where the Apostle John says he composed the Book of Revelation. The movie discusses the historical background to and messages in the first three letters in Chapter Two.

THE 7 CHURCHES OF REVELATION: TIMES OF FIRE presents a dramatic, engaging, Pro-Christian investigation of the letters to the first three churches in Chapter Two of the Book of Revelation. It has many interesting historical, theological facts drawing connections between the messages given by Jesus to the Apostle John in Revelation and the historical record in the First Century. TIMES OF FIRE ends by noting that the Roman persecution of Christians described in Revelation contains messages to all Christians down through the centuries who experience persecution.

(CCC, BBB, Pa, O, VV, S, N, D):
Dominant Worldview and Other Worldview Content/Elements:
Very strong Christian, biblical worldview discusses the Book of Revelation and the letters to the seven churches in Chapters Two and Three and promotes remaining steadfast in the Christian faith during times of persecution, but movie occasionally takes views on Revelation that Christians of other eschatological theologies may disagree, plus some discussion of pagan, occult practices, including human sacrifice, of the Romans during the two centuries before and after the birth of Jesus
Foul Language:
No foul language
Violence:
Some gruesome torture techniques are described in dialogue, there’s drawings of Christians being crucified or being prepared for being burned at the stake, and there are brief images of dead bodies in one photo from the Holocaust engineered by Adolf Hitler in Nazi Germany during World War II
Sex:
Brief references in dialogue regarding “orgiastic” practices of pagan and occult practitioners during the reign of the Roman Empire
Nudity:
Upper and rear male nudity in two photos of Jewish prisoners in a death camp during the Holocaust and upper male nudity of pagans having a party
Alcohol Use:
No alcohol use
Smoking and/or Drug Use and Abuse:
Two men smoke long Turkish pipes but no drugs; and,
Miscellaneous Immorality:
Nothing else objectionable.

THE 7 CHURCHES OF REVELATION: TIMES OF FIRE is the first part of a movie series examining the history and message of the Book of Revelation, in relation to the letters to the seven churches in Chapters Two and Three. TIMES OF FIRE presents a dramatic, engaging, Pro-Christian investigation of the letters to the first three churches and ultimately focuses on the need for Christians down through the centuries as well as today and in the future to remain steadfast in their Christian faith whenever they face persecution.

The movie gives a visually informative and aesthetically pleasing depiction of the early church through the lens of the Book of Revelation. Investigative filmmaker Christophe Hanauer travels to present-day Turkey, where the seven churches were located, to uncover the secrets of these prophetic letters. With the expertise of Dr. Mark Wilson, founder and director of the Asia Minor Research Center, the movie combines historical details, theological beliefs and a guided picturesque tour of the breathtaking setting once called Asia Minor, now modern day Greece and Turkey.

The journey begins at the island of Patmos, off the coast of Turkey. Decades after Christ is resurrected, the Apostle John is exiled to Patmos, along with his companion, Prochorus. John lives in a cave where he has visions of the Resurrected Lord. Christ tells John to write down the messages and share them with the Seven Churches. Christ appears as the High Priest with seven lamp stands. Many scholars believe it probable that Prochorus acted as John’s scribe.

John dictates the messages to Prochorus to be shared with three of the seven churches, the ones in Ephesus, Smyrna and Pergamon. The letters give encouragement and instruction to Christ’s faithful living at the present time. The three ancient cities share the characteristics of pagan and occult cultures which worship both humans and false gods. Paul of Tarsus uses these pagan and occult practices as an opportunity to evangelize. He takes advantage of large crowds by traveling to worship the false gods at festivals. As a result, many pagans are converted to Christianity. Pagan cultural norms are challenged by new Christian teachings regarding values. Some who greedily profited off those cultural norms, such as slavery and marginalizing people for personal profit, aren’t fond of Christian values. This leads to widespread persecution of Christians and Jews.

The Roman Emperor Nero is the first emperor who openly and aggressively unleashes tyranny on the Christian people. The list of countless Christian martyrs includes Peter and Paul, who are executed in Rome in 65 AD. Nero blames Christians for the Great Fire of Rome, which destroys two-thirds of Rome. Christians are burned alive as a punishment. This is an especially cruel act because sources give evidence to the fact that Nero himself actually started the fire.

The messages and visions in Revelation are consistent with current events at the time. The documentary points out that the term “Anti-Christ” is never mentioned in Revelation. Rather, the enemy is described as the “Beast” and “Satan.” The claim is that the evil entity mentioned in Revelation refers to Nero. The narrator mentions that the early Christian community in Ephesus, which was started by Paul in 52 A.D. collapsed because, as Jesus Christ speaks in his message through John, they “lost their first love.” It also discusses the martyrdom of Polycarp, one of the Apostle John’s disciples in Smyrna in the first part of the Second Century.

The rest of the movie discusses the message of Revelation to Christians down through the centuries, especially to Christians who are persecuted.

THE 7 CHURCHES OF REVELATION: TIMES OF FIRE presents a dramatic, engaging, Pro-Christian investigation of the letters to the first three churches in Asia Minor in Chapter Two of the Book of Revelation. It has many interesting historical, theological facts drawing connections between the messages given by the Jesus to the Apostle John in Revelation and the historical record in the First Century. The movie ends by noting that the Roman persecution of Christians described in Revelation contains messages to all Christians down through the centuries who have experienced and will experience persecution. Of course, the Book of Revelation not only contains messages to Christians about persecution. It also contains messages relevant to the whole story of the salvation of mankind through the Gospel of Jesus Christ. If Revelation is only looked at in reference to current issues in the early Church or current issues of today, the message of salvation is cut short. The Book of Revelation is both a reference to the early Christians and a visionary prophetic message to the universal Christian Church for all time.