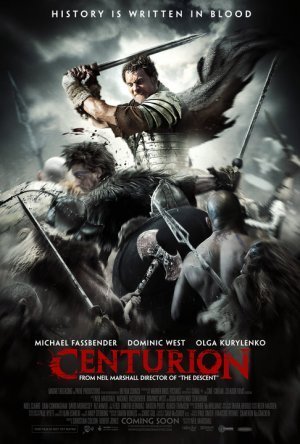 CENTURION is a gritty, violent, but stirring and heroic, action movie from England about a Roman centurion in Ancient Britain trying to survive a barbarian Pict hunting party. Roman Centurion Quintus Dias escapes from brutal Pict barbarians after they overrun his remote northern outpost. Quintus makes it back to the southern Roman headquarters. There, General Virilus of the famed Ninth Legion wants to use Quintus’ knowledge to lead a final assault of 3,000 soldiers on the Picts. The battalion is ambushed and slaughtered in a northern forest, however, and the general captured. After failing to rescue the general, Quintus leads a small group of survivors back to the Roman lines, but with a Pict hunting party hot on their trail.

CENTURION is a rousing adventure story with plenty of action. The movie’s Roman protagonist is an honorable man of high character. Thus, the movie extols honor, integrity, duty, courage, and even mercy. Eventually, the protagonist must leave behind the brutal paganism of both Rome and the Picts. Regrettably, CENTURION has plenty of very strong, bloody war violence and strong foul language, so extreme caution is advised for the media-wise.

(BB, Pa, LLL, VVV, S, N, AA, MM) Strong moral worldview extolling honor, integrity, courage, and mercy, but there are some references to Roman gods, but protagonist also rejects them, though he doesn’t replace them with another religion, and there is one mention of God in a scene, implying a single Creator; 27 obscenities (including more than 10 “f” words) and no light profanities; very strong, often bloody war violence includes arrows kill soldiers, swords kill solders, decapitations, soldiers lose arms in battle, bloody wounds, horses fall in battle, soldiers on fire, prisoners tied up, implied murder of a boy, fighting, prisoners beaten, axes hit soldiers, men jump into water rapids that carry them downriver, sword fighting, soldiers hit with spears, wolves chase two soldiers and one soldier deliberately wounds the other one so he can escape the wolves; no sex scenes but soldiers are with women while drinking and gambling; brief upper male nudity; alcohol use and drunkenness as soldiers party between duties; no smoking; and, gambling, betrayal, revenge.

CENTURION is a gritty, violent, but stirring, suspenseful and heroic, action movie from Britain about a Roman centurion in Ancient Britain trying to survive a barbarian hunting party. The movie extols honor, integrity, courage, and even mercy, and exposes the brutality and emptiness of paganism, but it has some bloody violence and strong foul language that limit its audience.

The story of CENTURION focuses on a Roman centurion named Quintas Dias, who is stuck in a remote fort in Northern Britain. The Pict barbarians take the fort and capture Quintus to use him as sport. Quintus escapes, however, and makes it to the large Roman fortress at York in the south.

General Virilus of the famed Ninth Legion wants to use Quintus’ knowledge to lead a final assault of 3,000 soldiers on the Picts. The battalion is betrayed, ambushed and slaughtered in a northern forest, however, and the general captured. Quintus survives, along with several other Romans, including the cook. He leads the men to the Pict camp to rescue the general, but the Romans fail. Making matters worse, one of the men, a deceitful rogue named Thax, murdered the chief’s son during the melee, a fact he hides from Quintus and the other Roman soldiers.

This act of murder begins a headlong flight back to the Roman lines in the south, with a Pict hunting party closely on their trail. The long journey back will test all of the men’s character. Of course, Thax has already failed the test.

CENTURION is a rousing adventure movie with plenty of action. The movie’s Roman protagonist is an honorable man of high character. Eventually, he must escape the brutal paganism of both the Romans and the Picts. In making that decision, he gets help from an unlikely source. All this gives CENTURION an incisive, inspiring, heartening appeal that media-wise viewers, including Christian viewers, may like.

Regrettably, CENTURION contains lots of very strong graphic, bloody war violence and strong foul language, including some “f” words. There is also an implication in the large Roman camp that the Roman soldiers are promiscuous with the local women in the town. This content, especially the violence and language, will limit the movie’s audience. It also deserves an extreme caution rating using MOVIEGUIDE®’s comprehensive system for rating and judging movies and their content, according to God’s objective, biblical standards.