"More of the Same Debauchery" 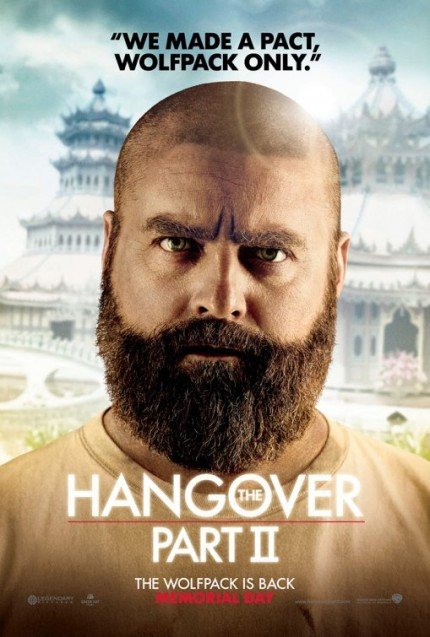 In THE HANGOVER PART II, Phil, Stu, Alan, and Doug – the guys of the successful, equally abhorrent first movie – are back in action. This time, the Wolf Pack travels to Thailand for Stu’s wedding. After trying to have a calm bachelor party, the boys awake in a hotel in Bangkok. They don’t remember what happened the night before, but there’s plenty of evidence to prove they had another wild night. Now, they must find what happened to the nephew of Stu’s Thai bride, who’s disappeared sometime in the night.

Like its predecessor, THE HANGOVER PART II is full of debauchery, drunkenness, obscene behavior, foul language, drug references, and full nude shots. There are some laugh-out-loud moments, but those moments are overwhelmed by this perverse content. Adding to these shenanigans are references to Buddhist paganism and a scene where Stu proudly proclaims he has an inner demon. Please pray moviegoers will stay away from this kind of obscene material, and please help MOVIEGUIDE® support the Good, the True and the Beautiful. If media wise families can convince more young people not to go to movies like HANGOVER PART II, Hollywood won’t make them.

(PaPaPa, HoHo, FR, O, LLL, VV, SS, NNN, AA, DDD, MMM) Very strong pagan, hedonistic worldview full of debauchery and homosexual characters, transvestites and man commits fornication with transsexual, Buddhist monks depicted meditating and lighting candles in front of shrine, and one man proudly embraces his dark side by saying he “has a demon inside”; 122 obscenities, 18 profanities and photograph of someone giving a middle finger; strong violence includes punching, kicking, wrestling, car chases, motorcycle accidents, man cuts off his finger during a drunken dare, Buddhist monk beats up guys with a staff for speaking in the monastery, adult man recalls wild night while envisioning himself and his friends as teenagers experiencing all the crazy antics, vandalism, riot, man shot in arm, car slams into a pig and it explodes on the car, monkey is shot in chase, man gets tattoo on his face; strong sexual content includes a lot of sexual dialogue throughout, men in strip club with transvestites, it’s implied that man has homosexual fornication with a she-male and photos of the act are shown during the credits, a number of references and jokes about oral sex, unmarried kissing, and discussions of human trafficking in Bangkok; extreme nudity includes full female nudity, full male nudity in several scenes, full transvestite nudity, and rear male nudity; drunkenness depicted from long night of partying and teenager drinks; major plot line revolves around guys being drugged having a wild night of partying and not remembering what happened, cocaine use depicted, overdose depicted, drug trafficking depicted, monkey smokes cigarettes; and, lying, blackmail, threats, kidnapping, and a lot of racial comments.

In THE HANGOVER PART II, Phil, Stu, Alan and Doug – the boys of the surprisingly financially successful first movie – are back in action. This time, the Wolf Pack travels to Thailand for Stu’s wedding. After trying to have a calm, laid-back bachelor party, the boys awake in a hotel in Bangkok. They don’t remember what happened the night before, but there’s plenty of evidence to prove they had another wild night of partying.

While trying to impress his spiteful, soon-to-be, father-in-law and trying to avoid another crazy night like their last trip to Las Vegas, Stu begs his buddies to forgo any plans for a bachelor party. His beautiful Thai bride tells him he should, at least, have one beer with his friends around the fire pit on the beach, and she wants Stu to take her young, 16-year-old brother, Teddy, with him and the guys for one beer. Stu reluctantly agrees and joins his friends around the fire pit.

The next thing Stu knows, he’s waking up in a hotel bathtub in Bangkok. He has a tattoo on his face; Alan has a shaved head; Phil has no idea what happened; there’s a strange monkey in their room; Teddy’s finger is lying on the coffee table; and, Teddy is nowhere to be found.

With time running out and only some piecemeal clues, Stu and the others must figure out what happened to them the night before. With their old friend, the villainous Mr. Chow, by their side, the Wolf Pack must navigate through the streets of Bangkok with Russian drug-dealers hot on their trail in order to find Teddy and make it to the wedding on time.

THE HANGOVER PART II, much like the first movie, is well made but very raunchy. It has a good soundtrack, the directing is solid, and the script is well written with a lot of clever twists and turns. There are some laugh-out-loud moments, but those moments are far outweighed by the movie’s perverse content.

The movie has a very pagan, hedonistic worldview. It contains a lot of homosexual content, including both implied and photographic evidence of Stu’s drunken fornication with a transvestite prostitute. There is strong amount of graphic sexual dialogue as well extreme nudity, including full frontal male, full female nudity and transsexual nudity throughout the movie. The movie has an over-abundance of foul language as well as drunkenness and drug use.

Adding to these perverse shenanigans are shots of Buddhist meditation and shrines in a Buddhist monastery, and a brief demonic element as Stu embraces his dark, partying ways by proudly proclaiming he “has a demon inside” him. THE HANGOVER PART II, while creative and sometimes funny, is an abhorrent movie full of tragically profane content.

Please pray moviegoers will stay away from this kind of obscene material, and please help MOVIEGUIDE® support the Good, the True and the Beautiful. If MOVIEGUIDE® can convince more people not to go to movies like HANGOVER PART II, Hollywood won’t make them.