"Provocative and Entertaining, but Mixed" 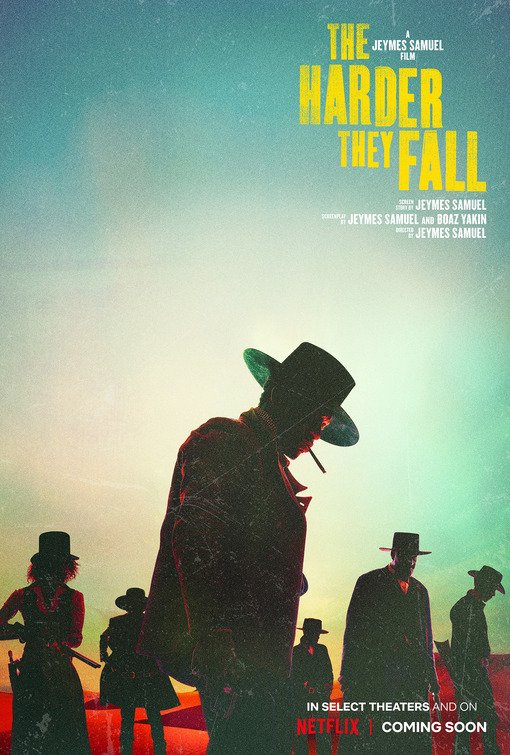 THE HARDER THEY FALL is a sprawling, violent western. The movie opens with a bearded black man barging into a pastor’s home, then murdering the pastor and his wife and carving a Crucifix scar on their young son’s forehead. Years later, the boy has become an outlaw, but he’s obsessed with killing the man who murdered his parents. In a shootout, Nat Love kills the last of the man’s gunmen. Since the murderer, a criminal named Rufus Buck, is serving a life’s sentence, Nat figures prison is a worse punishment for Buck. However, when Buck unexpectedly receives a pardon, Nat teams up with a famous lawman to bring Buck to justice.

THE HARDER THEY FALL is an explosive western, with a great soundtrack and Christian allusions. It also has complex, but provocative moral themes about justice, revenge and judgment. However, it has too many characters and too many subplots. Thus, the movie drags in some places. THE HARDER THEY FALL also has many intense bloody gunfights, lots of gratuitous, anachronistic “f” words, some strong profanities, and other negative content. So, MOVIEGUIDE® advises extreme caution.

(Pa, CC, B, FR, PC, Ho, LLL, VVV, S, N, A, D, M):
Dominant Worldview and Other Worldview Content/Elements:
Mixed pagan worldview in a revenge thriller set in the Old West, but with overt Christian allusions and references to the Bible, faith, Jesus, Heaven, churches, having a “changed soul,” and some provocative moral themes about justice and revenge, but they’re dealt with in a complex manner that’s more interesting and provocative than overtly offensive (the movie is a bit of a morality tale), plus some miscellaneous worldview problems such as three or four anachronistic references are made to karma in one scene, there are some politically correct attitudes about racism and white people that seem a little “woke,” and it’s implied in one scene that a side character, who dresses like a man, is lesbian and has feelings for a major character
Foul Language:
59 obscenities (many “f” and “s” words), seven GD profanities and one light profanity
Violence:
Very strong bloody violence includes blood spurting when people are shot and lots of strong action violence, such as many gunfights between two people and two groups of people, explosions, murder, fighting, and people tied up
Sex:
Unmarried couple starts to undress for sex but are interrupted and there’s some passionate kissing in a few scenes
Nudity:
Upper male nudity in one scene and some light female cleavage
Alcohol Use:
Plenty of alcohol use in a Western setting
Smoking and/or Drug Use and Abuse:
Some smoking but no drugs; and,
Miscellaneous Immorality:
Stealing, revenge, and three people are taken prisoner and threatened, but two get loose, and one is let go.

THE HARDER THEY FALL is a sprawling, violent western playing in theaters and on Netflix about an outlaw who steals from other outlaws but is obsessed with killing the man who murdered his father and mother and deliberately gave him a Crucifix scar on his forehead. THE HARDER THEY FALL is an explosive western featuring a black cast, with a great soundtrack, Christian allusions and complex yet provocative moral themes, but it drags in places and has many gunfights, very strong bloody violence and many gratuitous, anachronistic “f” words, plus some strong profanities.

The movie opens with a black pastor, Pastor Love, sitting down to dinner with his wife and his son, Nat. They pray and begin eating when a black gunman and two other gunmen enter their house inside their church. Pastor Love pleads with the man to leave his wife and son alone, but the man shoots the wife and then shoots the pastor. The gunman takes out a red razor and approaches young Nat, while a Latino gunman with a scorpion tattoo on his right hand grips Nat’s right shoulder.

Cut to some years later. A black man is kneeling before the altar in a Catholic church in Texas when a Latino Monsignor enters for confession and to take the regular. The black man rises, puts on his hat, turns around, and asks, “What possesses a man to paint a scorpion on his hand?” The Monsignor asks, “Who are you?” The black man replies, “Just a man. Here to kill the scorpion.” The Monsignor looks down at his hand, which has a scorpion tattoo on it. He says, “Those were different.” The black man takes off his hat, to reveal the Crucifix scar on his forehead. The Monsignor realizes the man is Nat Love. He starts to plead for his life, but Nat seems resolute. So, he starts to draw his gun, but Nat shoots him down. The parish priest comes out of hiding. Nat tells him the Monsignor is a wanted man and his body will fetch $5,000 for the priest’s church. The priest wonders why Nat isn’t taking the body in himself. “I’m worth ten,” replies Nat, who leaves.

Cut to seven laughing, red-hooded black bank robbers riding away with their loot. A black sniper in the rocks starts shooting the men down, and the rest start firing back at him. One of the men shouts that they’re being ambushed by the Nat Love Gang. When only three robbers are left, a second black man appears behind them and starts mocking them. One of the robbers recognizes the man is Jim Beckwourth, angrily responds to his mockery and draws his gun, but Jim shoots him and the guy standing next to him. Meanwhile, the sniper appears and starts berating Jim for fooling around with the bank robbers. The final robber, named Grimes, tries to draw a gun nearby, but Jim shoots it out of his hand. Grimes tells them they don’t now who’s money they stole. The sniper guy, whose name is Bill Pickett, says, “Y’all rob banks. We rob y’all.” However, Grimes replies that he’s not talking about the bank they just robbed but someone else. So, Jim and Bill take Grimes hostage to interrogate him later.

Cut to Nat riding at night into the black-run town of Douglastown. His girlfriend, Mary Fields, runs the local saloon, but she wants nothing more to do with him. Apparently, she got tired of Nat always running off to get revenge on the men who murdered his parents. Nat tries to assure her that’s he’s done with that, because he just killed the scorpion tattoo man. Also, he tells her that the man who murdered his parents, a notorious black outlaw named Rufus Buck, the head of the Red Crimson Gang Nat’s two friends, Jim and Bill, just robbed, is locked up in Yuma Prison for the rest of his life. “For a man like him, that’s worse than death,” he says. Mary isn’t buying what Nat’s selling, however. Bill bursts into this tense reunion and takes them to see Grimes in a nearby livery stable, where he’s being held hostage

Cut to the next scene, where Rufus Buck’s gang, led by Buck’s girlfriend, Trudy and his right-hand man, Cherokee Bill, holds up a train and frees Rufus, who’s being held in a safe by Army soldiers. After some tense gunplay, Trudy informs the Lt. Colonel in charge that a general has pardoned Rufus and all his gang members. She tells him the general is also upset that the Lt. Colonel and his men wiped out a whole mining town, including women and children, to steal their silver. The Lt. Colonel frees Rufus, but his gang kills all the soldiers except for one, who says he can drive the train.

Back at Mary’s saloon, Bass Reeves, the famous black lawman, a real-life character, enters. A bad dude who’s not to be messed with, Reeves takes Nat prisoner when he tells Mary, Jim, Bill, and the rest of the saloon that Nat will be the first one he kills. Nat goes willingly.

Outside the town, however, it becomes clear that Nat and Bass are going after Rufus, who’s probably holed up in Redwood, the black town he ran before he was captured. Mary and Nat’s friends show up and demand to help. Reluctantly, Nat agrees. Will any of them survive the upcoming violent showdown between the two gangs?

THE HARDER THEY FALL is an explosive western, with a great soundtrack and Christian allusions, combined with complex yet provocative moral themes. For example, several of the songs in the soundtrack contain Christian references. One mentions the Bible and faith, another mentions having a changed soul, and a third song almost becomes a gospel song, with a chorus singing the lyrics, “And when we get there, we shall sing across the heaven love shall ring.” Also, in one of several confrontations, Rufus Buck tells Nat he carved the Crucifix on Nat’s forehead so he would recognize Nat if he ever saw him coming to take his revenge. There’s an echo of ultimate judgment in his statement, as if Nat eventually will bring divine judgment on Rufus for the crimes he’s done. When the final showdown finally comes, however, the differences between Nat and Rufus are not so black and white.

That said, THE HARDER THEY FALL has too many characters and too many subplots. The gunfights at the end could be compressed. Thus, it drags in some places. THE HARDER THEY FALL also has many intense bloody gunfights, a revenge theme, many gratuitous, anachronistic “f” words, some strong profanities, and other negative content. So, MOVIEGUIDE® advises extreme caution.