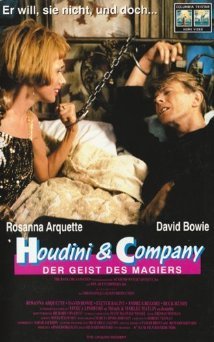 Saturated with a generous dose of obscenity, implied sadomasochism and homosexuality, a hard-to-follow recipe for THE LINGUINI INCIDENT calls for the three main ingredients, Monte, Lucy and Vivian, intertwined in selfish motives and their need for money, to plan a robbery. Overall, THE LINGUINI INCIDENT is a twisted movie--disjointed, incoherent and inane.

Saturated with obscenity, sadomasochism and homosexuality, a hard-to-follow recipe for THE LINGUINI INCIDENT calls for the three main ingredients, Monte, Lucy and Vivian, to plan a robbery. Monte (David Bowie) is a compulsive gambler, moonlighting as a bartender at San Francisco’s Dali Club. Lucy, a Dali waitress who moonlights as an amateur escape artist and dreams of being as great as Houdini, is guided by a fortune teller who claims to have Houdini’s wedding ring. Lucy’s sidekick, Vivian, makes peculiar undergarments, such as bras that eject little daggers. Out of desperation, the three plan to rob the Dali Club and split the money. However, the recipe becomes more complicated as powers of the occult are called upon to save each of them.