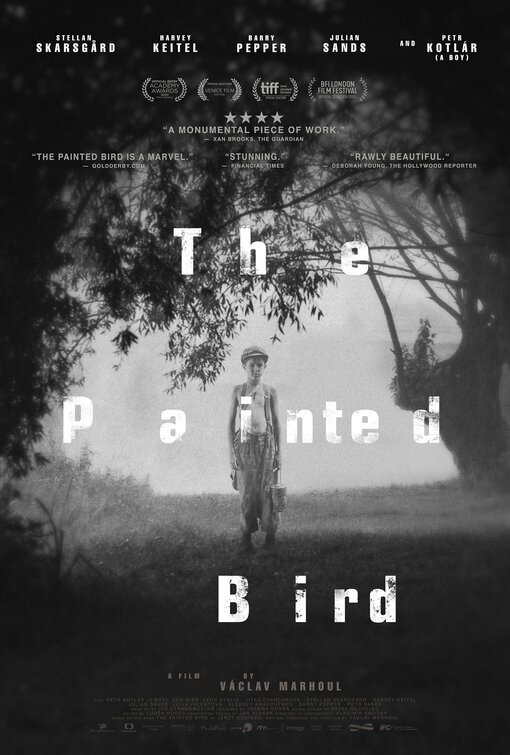 THE PAINTED BIRD is an overlong, repetitious drama set in World War II. A young boy is left to live on his elderly aunt’s farm in Eastern Europe for safety’s sake. The aunt suddenly dies, and the boy is forced to wander the countryside looking for shelter and trying to find his way home. Along the way, he witnesses all sorts of horrible things, including murder, suicide, incest, and war. He’s repeatedly abused by many of the despicable people he encounters. Will the boy adopt the brutality he experiences?

Based on an acclaimed 1965 novel, THE PAINTED BIRD is a horrific, brutal vision of man’s inhumanity to man, with little grace or kindness. At 170 minutes, THE PAINTED BIRD is a long descent into horror. Though there are some bright spots, such as an elderly priest who displays kindness toward the boy, the movie’s somber tone is relentless. All the other Catholics in this story are pretty despicable. There’s a ray of hope at the very end of THE PAINTED BIRD, but not enough to make the experience of watching it worthwhile.

(HHH, AbAbAb, CC, Co, PaPa, O, LLL, VVV, SSS, NN, AA, D, MMM):
Dominant Worldview and Other Worldview Content/Elements:
Depressing nihilistic worldview showing the horrors of man’s inhumanity to man, with a negative view of Catholics in Eastern Europe during World War II but there is a good, kindly Catholic priest who helps the young protagonist but ultimately can’t protect him from the nihilistic evil around them, a Russian soldier tells boy protagonist to be a “good communist,” plus references to pagan superstitions among local villagers focusing on things like bad luck and omens, and one female character is a witch/healer
Foul Language:
13 obscenities (mostly “f” words) and no profanities, and boy thrown into outdoor toilet pit
Violence:
Extreme and strong violence shot in black and white includes boys set another boy’s pet ferret on fire, and the poor dying animal runs in a circle screaming, middle aged man gouges out the eyes of a younger man, and the man’s two eyeballs are shown lying on the floor with a cat licking the blood, boy is whipped or beaten several times during the course of the movie, boy knocks his pedophile abuser into a circular pit full of scurrying rats, and man’s screams are heard as boy holds the rope to which the pedophile had leashed the boy, boy finds his dead aunt’s corpse, and he’s so startled that he drops his lamp, and the fire burns down the house, Jewish people crowded on a train car taking them to a concentration camp bust out, but are shot to death by German soldiers on train as they run across the field next to the train tracks, indigenous soldiers working with the National Socialist Germans invade a village to rape and pillage, people are shot to death point blank, women are grabbed to be raped, Russian soldiers enter the village to kill the soldiers raiding the village, several villagers are executed, explosions, Russian sniper shoots people in village in retaliation for the murder of three Russian soldiers, boy hangs a goat upside down and throws the goat’s severed head through window of teenage girl’s house because she eventually spurns his affections, boy hears sounds of man beating his wife, woman brutally beaten to death and violated, middle-aged man who had relations with the murdered woman hangs himself, and boy is not strong enough to hold the man’s body up to stop the suicide, flock of birds kill another bird, crows peck boy’s bare head, and older woman shoos them away (she had buried the boy in the ground up to his neck to cure him of a fever), images of corpses, boy turns to violence
Sex:
Depicted fornication, depicted rape, implied scene of pedophilia as man exits boy’s bedroom while boy lies in bed crying, woman seduces local teenage boys, and their mothers beat her to death for violating their boys, boy hears sounds of incestuous sex between teenage girl and her sick elderly father, teenage girl orders boy to kiss her legs and thighs, teenage girl attempts intercourse with boy, but he’s too young, and she hits him and leaves
Nudity:
Images of upper female nudity, images of rear male nudity, images of upper male nudity, partial nudity as boy’s elderly aunt gives him a bath (nothing sexual implied)
Alcohol Use:
Some alcohol use and drunkenness
Smoking and/or Drug Use and Abuse:
Some smoking; and,
Miscellaneous Immorality:
Lots of cruelty, acts of revenge, acts of emotional abuse and threats, and boy resents father who left him with his elderly aunt on her farm, which led to years of wandering and abuse.

THE PAINTED BIRD is an overlong, repetitious drama about a young boy trying to find his way back to his parents during World War II in Eastern Europe, but witnessing all sorts of horrible things and being himself repeatedly abused by the despicable people he encounters. Based on an acclaimed 1965 novel, THE PAINTED BIRD is a horrific, brutal vision of man’s inhumanity to man, with little grace or kindness.

The movie opens with the unnamed boy, who’s supposed to age from 6 to 12, living on his elderly aunt’s farm, where his parents left him for safety’s sake. The first scene shows him running from some other boys, who take the boy’s pet ferret and burn it alive. His aunt is caring, but one day she dies, and the boy is so startled to find her dead that he drops the lamp he’s carrying and the whole farmhouse burns down in flames.

The boy sets out on is own. As he wanders the countryside, however, he finds mostly depraved, sick people. For example, one older man who takes him in beats his wife and gouges out the eyes of his male farmhand for allegedly making eyes at her. Also, in one village, a kindly priest saves him from being killed by the Nazis running the village but then naively lets him stay with a wealthy parishioner, but the parishioner turns out to be a pedophile. Then, on the edge of a lake, the boy is shelted by a teenage girl and her dying, bedridden elderly father. The girl happens to be having incestuous relations with her father, but when her father dies, she tries to seduce the boy. However, he’s too young to please her, so she ruthlessly spurns him when he tries to express some affection for her.

Finally, two soldiers who are part of a Russian brigade fighting the Nazis and local Nazi sympathizers take in the boy. At one point, the one soldier urges him to be a “good communist,” while the other soldier lets him tag along to a sniper job to get revenge on some local villagers who murdered three other Russian soldiers. “An eye for an eye,” the sniper tells the boy. Shortly thereafter, the sniper gives the boy a pistol when they leave the boy at a local orphanage. The boy takes this lesson to heart when a man in the local marketplace beats up the boy for looking at a toy he’s selling.

At 170 minutes, THE PAINTED BIRD is a long descent into horror. Though there are some bright spots, such as the elderly priest who displays kindness toward the boy, the movie’s somber tone is relentless. All the other Catholics in this story are pretty despicable. There’s a ray of hope at the very end of THE PAINTED BIRD, but nowhere near the poignant hopefulness of Steven Spielberg’s masterful version of J.G. Ballard’s novel EMPIRE OF THE SUN, which is about an English boy who gets separated from his parents in China during World War II. THE PAINTED BIRD is a depressing and nihilistic movie.