"The Damage of Lies, Divorce, and Adultery" 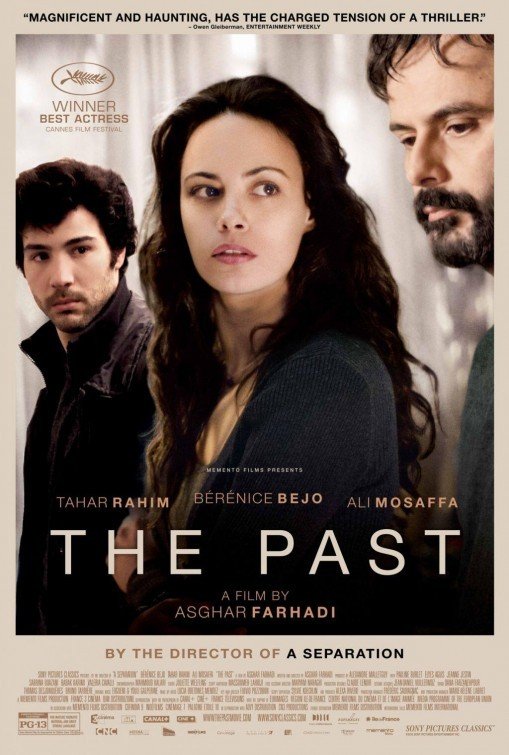 THE PAST is a compelling French movie with some heartfelt moments. Ahmad, an Iranian man, returns to France from Tehran after four years of separation from his French wife, Marie. Ahmad is finally ready to finalize the divorce and move on from their failed marriage. On arriving in France, however, Ahmad finds out his wife Marie and her two daughters from a previous marriage are living with her new Arab boyfriend. As Ahmad’s stay lengthens, the complexities of the damaged relationships resulting from sinful decisions thicken the movie’s plot.

THE PAST drops viewers into an uncomfortable situation that’s portrayed very naturally and realistically. Though sometimes slow, the movie is well filmed and acted. The characters are more than enough to keep most adult viewers interested. The worldview is mixed, however. The characters exhibit a secular pagan worldview. Even so, the movie shows the consequences of sin and the importance of maintaining a Godly family life. Thus, the characters realize what their sins have done, and restoration is sought. That said, the subject matter and brief foul language in THE PAST warrant strong caution.

(PaPa, B, C, L, V, S, N, D, MM) Strong pagan worldview mixed with a moral message at the end, though a few characters are Persian, most are secularized and immoral, engaging in adultery, lying, and cohabitation, but the consequences of such sins are seen at the end and redemptive themes of regret, repentance, and forgiveness are portrayed; seven subtitled obscenities (including a few “f” words) and no profanities; no violence, but a woman’s suicide attempt is discussed; implied unwed pregnancy and co-habitation; upper male nudity; no alcohol; cigarette smoking; and, multiple characters act immorally, a very dysfunctional family fights many times, and characters lie, but some of this is resolved by the end.

THE PAST is a compelling French movie from an Iranian director, with some heartfelt moments, about a married couple who finally decide to divorce after four years of separation.

Ahmad is returning to France from Tehran after four years of being separated from his French wife, Marie. He’s finally ready to finalize their divorce and move on from their failed marriage.

On arriving in France, however, Ahmad finds out Marie and her two daughters from a previous marriage are living with her new Arab boyfriend, Samir, and his son. Marie’s teenage daughter, Lucie, is rebelling and giving Marie and Samir problems at home. So, Marie asks Ahmad to talk to Lucie because they get along so well. Ahmad is reluctant to get involved, but agrees to talk to Lucie.

Lucie reveals to Ahmad that her mother’s boyfriend Samir is married, and his wife is in a coma because of a failed suicide attempt. Lucie believes his wife tried to kill herself because she discovered Marie and Samir’s adulterous affair. The secret behind Samir’s wife’s suicide starts to come to light to everyone. As Ahmad’s stay lengthens, the complexities of the damaged relationships resulting from all these bad decisions thicken.

THE PAST drops viewers in the middle of an uncomfortable situation portrayed very naturally and realistically. Berenice Bejo (THE ARTIST) and Ali Mosaffa, who play the leading roles of Marie and Ahmad, do a fantastic job at grounding their raw characters. Though the movie is slow at times like many European art movies, it outpaces director Asghar Farhadi’s previous critically acclaimed movie A SEPARATION.

The worldview is mostly pagan, however, and lightly moral, with some redemptive elements. Even though the director himself is a Muslim and multiple characters in the movie are from Iran, like A SEPARATION, the main characters have clearly been secularized and don’t exhibit a strong Islamic worldview. The divorce, affair, and tumultuous family conflict are clearly a result of this immoral and destructive family lifestyle. This is a clear testament to the importance of having a biblical family model. In fact, the ending is actually somewhat redemptive, because most of the conflict is resolved with forgiveness. In the end (SPOILERS), Samir is seen sitting next to his nearly brain dead wife. The movie’s final image is of him holding her hand, realizing the damage his affair has done on everyone. This tragic, yet moving, moment clearly shows the consequences of such sin. All that said, the subject matter and foul language warrant strong caution for THE PAST.