THE PRINCESS AND THE GOBLIN 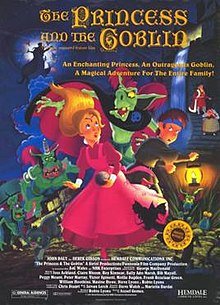 When he published THE PRINCESS AND THE GOBLIN in 1872, George MacDonald set the stage for C.S. Lewis and modern Christian fantasy. Now, MacDonald's classic tale comes to the big screen as an animated feature which tells the story of a young princess who has to overcome her fears to help save her father's kingdom from the forces of darkness. The film is superbly crafted, exciting and thought-provoking, but children need a theologically mature guide to help them understand its Christian import because some of the symbols in the movie are open to misinterpretation.

(C, B, O, V) Christian worldview; moral principles; some magic although it is denigrated; and, some cartoon violence.

If C.S. Lewis was the father of modern Christian allegory, George MacDonald was the grandfather. In his story THE PRINCESS AND THE GOBLIN published in 1872, he set the metaphorical stage for C.S. Lewis, J.R. Tolkien and modern Christian fantasy. Now, Robin Lyons has done a superb and faithful job of bringing MacDonald’s classic children’s tale to the big screen as an animated feature. For those who have not had the delightful experience of reading the book, THE PRINCESS AND THE GOBLIN tells the profound story of a young princess who has to overcome her fears to help save her father’s kingdom from the forces of darkness. In the process, she learns about faith, truth and love.

Many of the biblical parallels and theological principles are self-evident in MacDonald’s endearing work; however, his allegory is not as precise as C.S. Lewis’ CHRONICLES OF NARNIA, and there are areas which are open to misinterpretation. In fact, because of the misuse of many biblical symbols in contemporary culture, some will be put-off by MacDonald’s allegory. At the time that MacDonald wrote, people understood these symbols. However, in the final analysis, THE PRINCESS AND THE GOBLIN is superbly crafted, exciting and thought-provoking, but children who see this film will need a theologically mature guide to help them understand its Christian import.

Writer: Robin LyonsBASED UPON THE BOOK BY: George MacDonald