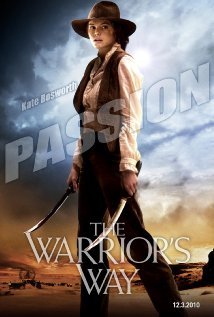 In THE WARRIOR’S WAY, a Chinese assassin, Yang, can’t bring himself to kill the infant daughter of a rival clan leader. So, Yang kidnaps her and hides in Wild West America. Yang and the baby take refuge in a town populated by the most pathetic circus of all time. Yang falls in love with a young woman who trains him for working in a laundry while he teaches her how to wield a sword. Then, the local villain arrives to terrorize the town with warriors from Yang’s clan, looking to kill him and the baby. A bloody battle ensues.

THE WARRIOR’S WAY is a garish atrocity. It fails to provide a single moment of excitement and barely has any recognizable human emotions or sympathetic, relatable characters in its entire running time. There’s also extreme bloody violence, some foul language and a sick subplot involving the local villain’s proclivities. In fact, the hero is merely a spinning human Cuisinart with a sword, lopping off arms and even heads at will. See this movie, and you may feel like you’ve lost your mind as well. THE WARRIOR’S WAY is one of the worst movies.

(PaPa, B, C, HoHo, LL, VVV, SS, N, AA, MM) Strong pagan worldview with light moral elements and a light Christian element as townspeople celebrate Christmas with fireworks and dancing, teaching the Chinese hero that it is the main day to celebrate each year without specifying the reason for the season, Jesus Christ, plus strong homosexual element where minor male character dresses as a woman; nine obscenities, six strong profanities and two light profanities; very bloody gun and sword battles with arms and heads chopped off and explosions, plus a circus clown is forced to wear a bucket of water on his head and have bad guys shoot at it, terrifying him, another man who mocks the villain gets choked with a whip around his neck and dragged to his death from a horse at a high rate of speed, threats of violence, little person grabs crotch of two men making fun of a Chinese man, machine gun rips into people, and implied and attempted rapes, first by main villain against a young teenage girl, then against two other children when she returns for revenge as adult; strong sexual content includes attempted pedophilia and attempted rape of young teenager by villain, an implication that the villain may even want to violate a baby, and the teenager, now an adult, seduces the villain away from younger victims, plus a line of crude dialogue and a homosexual element where minor male character dresses as a woman; upper male nudity, female cleavage and rear male nudity when town drunk falls down; alcohol use and drunkenness but town drunk sobers up and becomes a hero in the final gun battle; no smoking; and, some tattoos, racism but rebuked, little person denigrated but this is rebuked, and villains trample and destroy property and cause general mayhem against the good townspeople in several sequences.

The nearly incomprehensible and painful to watch THE WARRIOR’S WAY is easily the worst made movie of 2010. An awful mishmash of martial arts action, a Western and even fantasy, it follows the story of Yang, a ninja-type warrior from China who flees his initial assignment to kill an enemy’s baby. Instead, he kidnaps the baby and escapes to Wild West America and a town inexplicably populated by the most pathetic circus of all time.

There, Yang meets Lynne, an incredibly ignorant woman with an annoying accent that varies in thickness throughout the movie. From Lynne, Yang learns how to work as a laundryman in exchange for teaching her the art of sword and knife fighting. A decade before, Lynne was nearly raped by the villainous Colonel, who shot her and left her for dead after she fought back. Now the Colonel and his hordes of minions keep looking for her and wreaking havoc on her town. Yang must ultimately overcome his desire to become a more peaceful man and save Lynne and the town in the final battle. The final battle, however, isn’t just against the cowboy army lead by Colonel, however, but also a massive band of his fellow warriors, who not only have absurdly sailed across the sea on a hijacked ship but manage to drop out of the sky as if leaping from an unseen spacecraft just in time to slaughter the cowboys and chase Yang to retrieve the baby they want to kill. Ultimately, Yang and Lynne help lead the town in destroying the baddies from all sides and dimensions.

THE WARRIOR’S WAY is a garish, loud cinematic atrocity that fails to provide a single moment of excitement and barely any recognizable human emotions or sympathetic, relatable characters in its entire running time. In the lead, Dong-gun Jang is a cipher who barely speaks English or any other language. This is the first American movie for the Korean action star, and hopefully the last. As Lynne, Kate Bosworth gives an unhinged, absolutely moronic performance that could do permanent damage to her career, while former Oscar-winner Geoffrey Rush takes slumming to a whole new level with his performance as the town drunk. The movie has long stretches without action as the hero tries to turn from his violent past and do nice things, but they’re so boring and blandly written it’s hard to care. Meanwhile, the hyper-violent, seemingly endless final battles are indecipherable gorefests that don’t spotlight Jang’s supposedly strong martial arts skills at all since he’s basically a spinning human Cuisinart with a sword, lopping off arms and even heads at will. THE WARRIOR’S WAY is an awful mishmash of martial arts action, a Western and even fantasy, with extreme bloody violence and a sick subplot.