"The Tooth Will Set You Free" 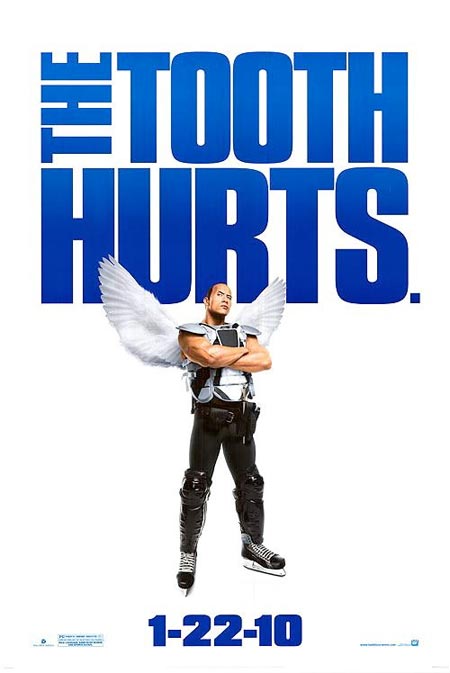 TOOTH FAIRY is a zany, witty family movie. Dwayne Johnson plays Derek Thompson, an aging hockey player in the minor leagues, where he is an enforcer called “The Tooth Fairy.” Derek’s “specialty” is to slam other players against the boards, sometimes causing them to lose a tooth. Derek does just that in one game. Following the game, an admiring boy approaches Derek. The boy wants to be a hockey player, but the embittered Derek dashes the boy’s dreams. The next night, Derek is magically transported to Fairyland, where the Chief Tooth Fairy, Lily, played by Julie Andrews, punishes him to one week’s hard labor as a real tooth fairy. As he slowly adapts to his new position, Derek rediscovers his own forgotten dreams.

TOOTH FAIRY is filled with funny physical comedy and witty dialogue. The cast does a fine job. Adding a lot of heart is Derek’s relationship with an attractive widow and her two children. The idea of pursuing personal dreams can be unbiblical, but the movie’s real message is the importance of encouraging other people. As Ephesians 4:29 says, we must build other people up “according to their needs.”

(BB, C, Ro, V, N, M) Strong moral worldview with a Christian, biblical overtone that’s uplifting, plus a reference to God and a man in jail mentions to another man in jail about the “higher power” of AA, with some light Romantic elements; no obscenities or profanities, but a shrunken tooth fairy gets flushed down a toilet and smells afterwards; violence some hockey violence, such as players get hit and knocked down hard, one player loses a tooth which goes flying high up in the air, comic pratfalls, flying tooth fairy is hit with tennis balls, tooth fairy escapes cat and dog; no sex; upper male nudity in one locker room scene; no alcohol; no smoking; and, lying and man harshly tells two boys that their dreams are unrealistic but he is rebuked for not being encouraging and he learns his lesson.

Dwayne Johnson plays Derek Thompson, an aging hockey player sent down to the minor leagues, where he plays as an enforcer called “The Tooth Fairy.” Derek is only brought in to slam other players against the boards, jarring them so much that they lose a tooth. Sure enough, the movie shows Derek doing just that. As the hockey crowd cheers, Derek shouts goofy sentences like “The Tooth Hurts” and “You can’t handle the tooth!”

Following the game, however, an admiring young boy approaches Derek. The boy wants to be a hockey player too, but an embittered Derek dashes the boy’s dreams in front of his parents.

The next night, Derek awakens to find a summons accusing him of “Dissemination of Disbelief.” He finds himself magically transported to Fairyland, where the Chief Tooth Fairy, Lily, played by Julie Andrews, sentences him to one week’s hard labor as a real tooth fairy. Derek is not a happy camper, but, as he slowly adapts to his new position, he begins to rediscover the power of belief and his own forgotten dreams.

TOOTH FAIRY is filled with very funny physical comedy and surprisingly witty dialogue as Derek encounters the magical people of Fairyland. Besides the no-nonsense Chief Tooth Fairy, he meets an officious administrative fairy played by Stephen Merchant, and the basement warehouse of a fairy played by Billy Crystal, who supplies Derek with wacky tools of the trade, such as an invisibility spray, shrinking paste, Cat Away, and amnesia dust.

The cast of TOOTH FAIRY does a great job. Adding a lot of warmth and heart is Derek’s relationship with an attractive widow, played by Ashley Judd, and her two children. Conflict occurs when Derek makes the mistake of dashing the two children’s dreams and fantasies.

Though the idea of pursuing personal dreams can be a Romantic philosophy lacking direction from God, the movie’s real message is the need to build up the hopes, dreams, and aspirations of other people as well as your own. This theme is echoed in Scripture in such passages as 1 Thessalonians 5:11, “Therefore encourage one another and build each other up. . .” (see also Romans 15:2 and Ephesians 4:29). It’s Gospel truths like these that will truly set you free!