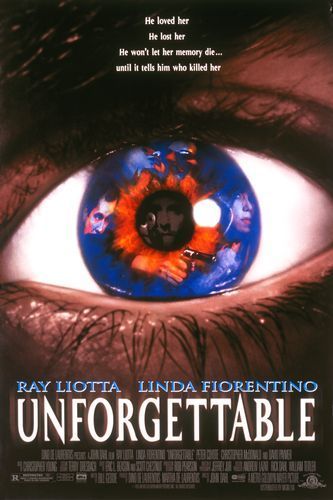 In UNFORGETTABLE, Dr. Krane takes a drug that lets him live the memories of deceased people. He does this to solve the mystery of his dead wife. This movie is boring and silly in its premise. Furthermore, it has repeated violence with a lot of gore. UNFORGETTABLE is definately FORGETTABLE.

UNFORGETTABLE is definitely forgettable. Ray Liotta plays a forensic scientist, Dr. Krane. He was accused of killing his wife but was let off on not enough evidence. He vows to find the killer of his wife. He meets a researcher played by Linda Fiorentino who has found a memory drug. Although only tested on rats, when injected with Cerebral Spinal Fluid, the drug gives its subjects memories from the donor of the spinal fluid. Dr. Krane sneaks into the lab, steals the drug and injects himself with it after mixing some of his deceased wife’s CSF. He wants to know if he can discover who her killer is. Dr. Krane is reintroduced to the scene of her murder and makes out a face. Dr. Krane continues to inject himself, and puts more pieces of the puzzle together. When he injects himself with the drug for the last time, he jeoopardizes his own life, but discovers the real killer, a person he never expected.

Though containing some high-tech biospeak, this movie is filled with cliche’s and poor writing. The viewer is merely subjected to nearly two hours of confusing, boring, and often times sickening murder sequences. Many viewers will be put off by the gross and bloody violence. There is plenty of it and many scenes are repeated again and again. Perhaps the violence is the only thing you might remember about this otherwise, forgettable thriller.