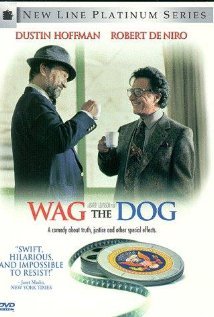 WAG THE DOG stars Dustin Hoffman and Robert DeNiro as men who create a completely fabricated war on television to divert attention away from an indiscreet president desiring re-election. Hoffman plays a Hollywood producer, named Stanley, hired by a presidential spin doctor, named Conrad (played by De Niro), to create a fictional war on television between the U.S. and Albania. Stanley creates bogus news footage and even theme songs. Conrad and Stanley invent a story about a US serviceman trapped in Albania who is rescued by a presidential order. Lies pile up on lies, events change, but the creative team rolls with the events until election day.

WAG THE DOG is a frightening commentary on media manipulation. Much of the humor in this movie comes from the depths that these folks will sink to create a complete fabrication about the integrity of the presidency. The movie suggests that the president’s own advisors, the CIA and the media can be swayed to propagate lies. This movie doesn’t endorse corruption, it just says that it can happen and gives an example in a comical manner. Containing many obscenities, it doesn’t have any explicit sex, violence or nudity as it demonstrates the practices which are ultimately damaging America

Just a few weeks after MAD CITY was released, a movie starring Dustin Hoffman about media manipulation, Barry Levinson and David Mamet will release WAG THE DOG, a movie starring Dustin Hoffman about media manipulation. Talky, fast-paced and including an all-star cast, WAG THE DOG looks at how absurd as well as how easy it can be to influence the media to create a smoke screen during the last days of a presidential campaign where the president needs damage control when he is accused of fornicating with a minor. Hoffman plays a Hollywood producer, named Stanley, who is hired by a presidential spin doctor, named Conrad (Robert De Niro), to create a fictional war on television between the U.S. and Albania to divert the attention of the public away from the scandal.

The title WAG THE DOG is explained through words on the screen at the beginning of the movie: “Why does a dog wag its tail? Because the dog is smarter than the tail. If the tail was smarter than the dog, the tail would wag the dog.” This is a metaphor for turning the tables on control and manipulation. In this case, a chosen few create fictional news and shape world opinion, rather than world events shaping the news and world opinion. Conrad and his assistant Winifred (played by Anne Heche who doesn’t display her homosexuality in this movie) go to California from Washington D.C. and meet Stanley at his opulent home. They tell him they need him to produce a series of TV events which features a war between the U.S. and Albania. Reluctant at first, Stanley agrees and soon is having a whole group of artists over for a creative brainstorming session.

Stanley is able to create a theme song for the war and a clever, totally fabricated video clip of a young Albanian girl (played by a very American-acting Kirsten Dunst) running from her angry countrymen. The American public are convinced, and the presidential polls reveal that the president is retaining his lead, despite a very lame TV commercial campaign which continually states, “Don’t change horses in midstream.” CIA agents see through the facade and try to question Conrad and Winifred, but through payoffs and quick-talking, the CIA agents are bought and muzzled. Regrettably for the spin doctors, the CIA agents are paid more handsomely by the president’s political opponent, and the news states that the Albanian crisis is over. With a few more days until election, Conrad, Winifred and Stanley invent a story about a US serviceman trapped in Albania, eventually rescued by the president. Lies pile on lies, events change, but the creative team rolls with the events until election day.

WAG THE DOG is a frightening commentary on the deception that can occur between a marriage of shameless immoral people and new communication technologies. Much of the humor in this film comes from the depths these folks will sink to create a complete fabrication about the integrity of the presidency. Willie Nelson is a good example of a composer who fashions heart-wrenching songs for fictional people and events. The movie suggests that the President’s own advisors, the CIA and the media can be influenced to propagate misinformation and lies. The movie further demonstrates that the government will kill people who get in the way of this charade Most of the violence in this movie is psychological and moral rather than physical. This movie could easily have been a thriller about the little guy fighting the bad system, but it chose instead to comically feature the bad system and its operators.

David Mamet is known for his rapid-fire dialogue, corrupt storylines and frequent use of obscenities. Here, the obscenities aren’t blatant, but there are many. Also, the dialogue sometimes becomes unnatural when Mamet has his characters repeat their dialogue over and over for effect. Mamet is clever enough that he should simply let the skilled actors say their lines once and the emotional effect of their meaning would be much stronger. Every actor seems to be enjoying himself in this movie, and even the small supporting roles have great lines, such as William H. Macy as a CIA agent. The intelligent acting and clever execution may attract the academic viewer interested in American politics, but it will not appeal to the viewer who likes feel-good, special effects movies.

WAG THE DOG doesn’t necessarily endorse government corruption, it just says that it can happen and gives an example of it performed in a comical manner. The movie is in many ways as sad as it is funny. It is a practice that may be more prevalent in real life than we care to admit or wish.