WHISPERS IN THE DARK 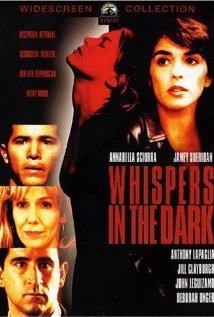 In WHISPERS IN THE DARK, a psychiatrist finds herself caught in the shocking aftermath of a patient's murder. Although the movie keeps viewers guessing "whodunit" until the very end, it is filled with brutal murders, crude language, homosexual attractions, and pornographic bedroom scenes.

WHISPERS IN THE DARK is about a psychiatrist who finds herself caught in the shocking aftermath of a patient’s murder. The story begins with Dr. Ann Hecker, a New York City psychiatrist. Her patient, a woman named Eve, has a perverse, sexual relationship with her lover that involves sadomasochism. Although this disturbs psychiatrist Ann Hecker, she begins to fantasize about these episodes in her dreams. She also develops a homosexual attraction to her patient, Eve. Then, Dr. Hecker meets a kind gentle man named Doug and begins a passionate affair with him. To her shock, she sees Doug and her patient, Eve, together one day and figures out that he must be Eve’s sadistic boyfriend. When Eve later turns up dead by strangulation, Dr. Hecker and several others become implicated in the crime.

Overall, WHISPERS IN THE DARK keeps viewers guessing “whodunit” until the very end. However, it is yet another psychological thriller that have become so popular in Hollywood since the success of SILENCE OF THE LAMBS. The WHISPERS IN THE DARK may be intended as a brooding indictment of the failure of the doctor-patient relationship in psychological counseling. However, any redemptive messages are lost amidst brutal murders, crude language, homosexual attractions, and pornographic bedroom scenes.