"Not as Family Friendly as It Should Have Been" 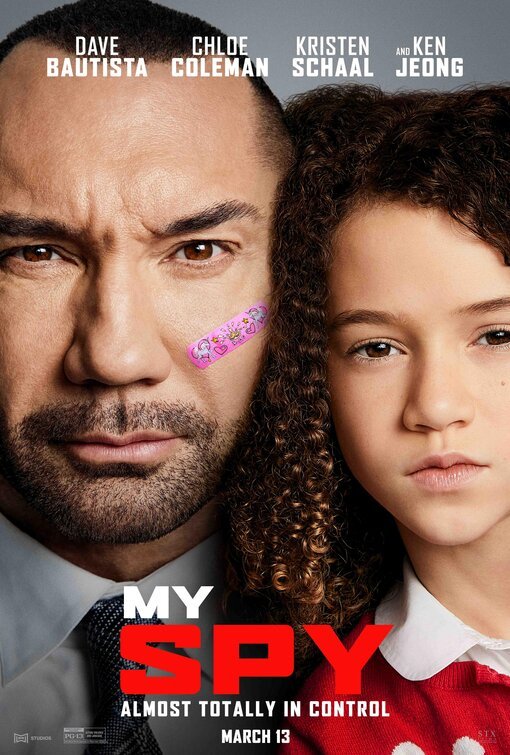 MY SPY is an action comedy that’s not as family friendly as it might seem. JJ is a tough CIA agent who’s in trouble with the agency for being too aggressive and has been given an easy surveillance assignment in Chicago. Sophie is a 9-year-old girl, the subject of JJ’s assignment along with her mother. Sophie catches JJ and his partner watching her apartment to see if her nefarious uncle visits. Sophie blackmails JJ into doing everything she wants, like taking her to school events, training her to be a spy and dating her mother. However, multiple threats lurk nearby, just waiting for them to let down their guard.

Despite cute moments, the humor, action and foul language in MY SPY appeals to an older audience. The cast could do better, and the story hits a small lull, but the comic timing is good and enjoyable. MY SPY has a strong moral worldview where good defeats evil. However, there’s lots of foul language, some overly strong action violence and Sophie lies to her mother. So, MOVIEGUIDE® advises extreme caution for MY SPY.

(BB, C, Ho, LLL, VVV, A, D, M):
Dominant Worldview and Other Worldview Content/Elements:
Overall moral worldview in an action comedy where good defeats evil, some redemptive elements like sacrificing yourself for other people, plus light homosexual elements as a homosexual male couple living across the hallway are secondary characters
Foul Language:
About 36 obscenities and 15 profanities, one use of “screwed,” some crude name callings, one depiction of vomiting
Violence:
One shot of a severed head flying across the screen in slow motion done in a comical way and constant action violence includes gun shoot outs, explosions and hand-to-hand combat, some knife violence, a man intentionally trips children on an ice skating rink after they make fun of him
Sex:
No sex
Nudity:
No nudity
Alcohol Use:
Some light alcohol shown throughout
Smoking and/or Drug Use and Abuse:
A cigarette is shown still smoking in an ashtray, but no illicit drugs;
Miscellaneous Immorality:
Examples of blackmail as a young girl threatens to expose a CIA agent unless he does as she tells him, a girl lies repeatedly to her mother to do as she wishes and in order not to get into trouble, some examples of bullying, a girl’s uncle kidnaps her to use her as collateral, dysfunctional family as a woman is unaware of her late husband’s devious affairs and destructive relationship with his brother.

At first glance, MY SPY looks like it could be a fun family movie, because it involves a young girl who gets involved with a tough CIA agent who’s watching her and her mother to see if the girl’s nefarious uncle will come visit them. Although MY SPY has a strong moral, redemptive worldview and many cute, comical moments, it also has lots of foul language and some overly strong action violence that warrant extreme caution.

The movie begins with the CIA agent, nicknamed JJ, working undercover on a mission, trying to retrieve some much needed information for the government. However, when he fails at remaining in character, he resorts to his fists and firepower to complete this mission. He receives applause as he returns to the office, with his coworkers congratulating him on his recent work. Although it seems that he did a great job, his superior isn’t too pleased. They needed information from a few of these bad guys, and, instead of actually getting the information, JJ just killed everyone. He’s now on thin ice with the agency, and his boss sends him on an easy surveillance assignment in Chicago with a female tech agent named Bobbi, who’s mildly obsessed with him.

Meanwhile, 9-year-old Sophie and her mother, Kate, have just relocated to Chicago after the death of Sophie’s father. Although they knew nothing of it, Sophie’s father was involved in some shady dealings with his brother that pitted them against each other, making them sworn enemies. Sophie and her mom are trying their best to start over, but Sophie’s not looking forward to a new school and trying to make friends all over again. Although she practices talking about her previous life in Paris, it doesn’t go so well when she gets on the schoolbus with jelly on her face and is immediately made fun of by the other children.

Not long after the cameras are in place, Sophie comes home to find that her mother has to work an extra shift at the hospital, and she’s stuck at home all alone. However, when her dog starts playing with one of his toys, Sophie sees something suspicious on his ball. She picks it up and finds the hidden camera that was placed there. Although JJ and Bobbi begin to panic, they believe, wrongly as it turns out, that there’s no way a 9-year-old child could possibly track the camera back to them. However, Sophie’s more tech savvy than they think. Soon, she’s standing right behind them, recording everything they say, and they realize they’ve been totally busted. Sophie threatens to send the recording to her mom, unless JJ will take her to an ice skating birthday party she’s missing because her mom’s at work. Reluctantly, JJ takes her there, but when they return he gets a swift kick in the crotch from her mother when she sees them together. Sophie lies and convinces her mom that she disobeyed, but that JJ protected her from some bullies and brought her home.

This results in more blackmail by Sophie against JJ. Sophie makes JJ come with her to “Special Friend Day” at school, which makes a big impression on the other children. She also convinces JJ to train her how to be a spy. Since JJ and Bobbi have basically nothing to do, JJ and Sophie spend most days together and start to become friends. Little do they know that multiple threats lurk nearby, just waiting for them to let down their guard.

MY SPY takes a cute, comical approach to the story, with an entertaining plotline and humor that for the most part actually does work. Dave Bautista as JJ is clearly still working on his acting skills, but the support from the rest of the cast gives him what he needs to keep the entertainment value on a high level. The comic timing does a lot for the movie, and young Chloe Coleman as Sophie shines on screen as a natural performer.

MY SPY has a strong moral worldview with good defeating evil, plus some redemptive elements like sacrificing yourself for other people. However, Sophie often lies to her mother. Also, the movie contains a substantial amount of action violence, with some blood and images that could be disturbing for younger viewers. Finally, it has plenty of cursing and other inappropriate foul language, with some crude name calling too. Because of these things, MY SPY sadly isn’t as family friendly as it could have been. In fact, MOVIEGUIDE® advises extreme caution for this PG-13 movie (see our CONTENT Section for more details).