"A Girl and Her Giant Pet Pig" 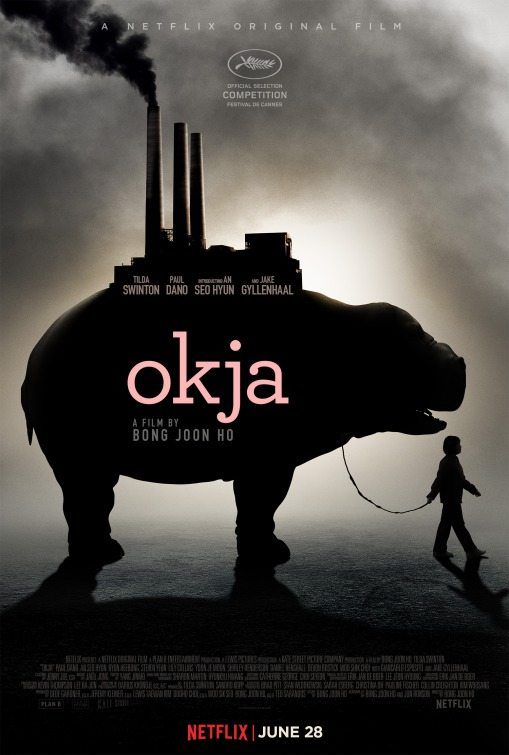 OKJA is a friendly super pig genetically designed by a large corporation of scientists who seek to make the most profitable meat product in history. Flash forward 10 years to a beautiful hut in South Korea where a young girl, Mija, lives with her grandfather and only companion, her pet pig Okja. What follows is a battle between the corporate scientists who designed Ojka, who claim her as their own, and a team of animal activists who seek to bring Okja back to her rightful home with Mija.

Mija’s giant pet pig is a CGI creature some have compared to the beloved mythical character, ET. However, the movie is far from the relatively family-friendly movie about the relationship between a young boy and his alien friend. OKJA is an intense action-packed movie filled with questionable scenes for children. It has a dominant humanist, environmentalist, anti-capitalist worldview. It also uses some strong foul language, violence, bloodshed, and graphic animal abuse to get its point across. That said, the relationship in OKJA between the girl and her oversized pet is endearing and heartfelt.

(HH, PCPC, EE, AcapAcap, B, C, LL, VVV, AA, DD, MM) Strong humanist, politically correct, environmentalist worldview with anti-capitalist sentiments where a large corporation creates a handful of giant super-pigs to dominate the meat industry and gain more riches, and CEO of corporation has no change of heart and lets one pig live only in exchange for gold, with some moral, redemptive elements extolling principles of love, loyalty and sacrifice through a young girl’s relationship with a large genetically produced pig, and girl risks her life for her pet numerous times; at least 39 obscenities (including 27 or so “f” words); too much extreme and disturbing violence, and strong violence includes girl’s large pet is brutalized (including a disturbing scene where the animal is used as a breeding pig off-screen), other disturbing images of animal abuse, dead giant pigs hang from a ceiling, pigs caged in unsanitary conditions with nowhere to run, sleep or relax, frightening image of a pig strapped down to a machine to be used for meat products, men fight and punch each other on streets, characters hit objects as they try to escape or are chased, girl ends up with a black eye and bloody scratches on her head, heavy bloodshed, images of dead and bloody pigs in factory, man drinks blood from a dead pig, villains use guns and explosives; no human sexual content but there’s a scene of implied animal breeding practices

OKJA is about a genetically modified pig created for a revolutionary line of meat products, but after the giant pig grows up her owner, a young girl from South Korea refuses to give her pet away for food, which results in a tense battle between a large corporation and a group of animal rights activists helping the girl. OKJA is an entertaining, action-packed movie, but it’s not really meant for children because of strong foul language, some extreme violence and disturbing images of pigs being abused and tortured for food. OKJA has a strong humanist, environmentalist, anti-capitalist worldview against eating meat, but the relationship between the girl and her oversized pet is sometimes endearing and heartfelt.

Mija, a South Korean girl, has been the caretaker for a remarkable mega-pig named Okja. Mija, a loving child whose parents passed away year ago, lives a simple life in a hut with her grandfather in the mountains in South Korea. She spends her days playing in the woods and swimming in water holes with her oversized pet pig, Okja.

What Mija doesn’t know is that, 10 years ago, Okja was created by a team of scientists under the sleazy Mirando Cooperation. Expert villain actress, Tilda Swinton, plays Lucy Mirando, CEO of the corporation. Ten years ago, Lucy created 26 super pigs and placed them all around the world. Whichever pig had the best health and stats 10 years later would be shipped to New York and crowned the mega-pig winner. According to their records, Okja is the healthiest, strongest pig of all.

Johnny Wilcox, a quirky zoologist played by Jake Gyllenhaal, flies to South Korea to fetch the super pig. Mija is confused by his presence in her home. Mija doesn’t speak English and only through a continuous stream of Korean subtitles throughout the movie does the audience understand what she’s saying. Mija’s grandfather pulls her aside and informs her he never bought Okja and technically they have to give her back to the corporation. He gives her a beautiful gold pig instead, but she pushes it away and demands they give back her beloved pet.

In an emotionally tragic scene Okja is taken away from Mija. From here on out the movie springs into a non-stop series of action-adventure scenes. Mija smashes glass with her hand, dodges speeding cars in the middle of the street and fist fights with a secretary to get to her pig. She jumps on top of a large truck where Okja is strapped inside. The truck bursts open after an unknown group of men and women in black masks cause it to crash. Okja escapes and scoops Mija up on top of her back. The giant pig destroys parts of the city running from the bad guys while trying to find a safe spot to hide. The crew with masks reveals themselves as the ALF, Animal Liberation Front, who will do anything to protect animals.

Meanwhile, the footage of Okja and Mija running through the streets with the animal rights activists in South Korea has gone viral. Lucy devices a plan to turn the negative footage to her benefit. She pays for Mija to come to New York, where she’ll be reunited with Okja on stage. Off in the factory, however, Okja is being tortured and bred with another pig to make a super product of meat items.

Can Mija rescue Okja before it’s too late?

Mija’s giant pet pig is a CGI creature some have compared to the beloved mythical character, ET. However, the movie is far from the relatively family-friendly movie about the relationship between a young boy and his alien friend. OKJA is an intense action-packed movie filled with questionable scenes for children. It has a dominant humanist, environmentalist, anti-capitalist worldview. It also uses some strong foul language, violence, bloodshed, and graphic animal abuse to get its point across. That said, the relationship in OKJA between the girl and her oversized pet is endearing and heartfelt.