SNOWED IN FOR CHRISTMAS

"Family Is the Ultimate Christmas Gift" 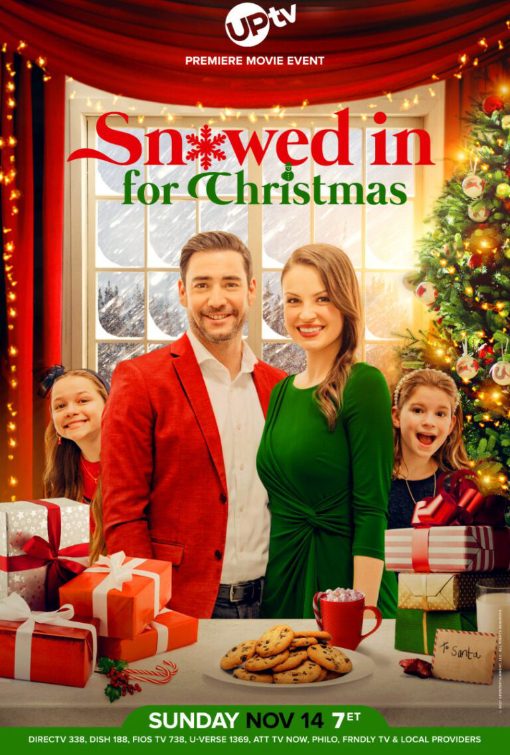 SNOWED IN FOR CHRISTMAS is a delightful holiday romance on UPtv about an Au Pair girl named Kaley. Because of Christmas, Kaley has one more night with the two Cunningham girls before she goes home to spend Christmas with her own family. However, when a snowstorm cancels the Cunningham parents’ flight back, it’s up to Kaley to sacrifice her time to take care of the girls. Mr. Cunningham had noted that his brother, Ethan, is coming to spend Christmas at their house, but he wasn’t scheduled to arrive until Kaley leaves. Will Ethan’s unexpected, surprise early arrival hurt or help Kaley’s holiday spirit? Also, will Kaley and Ethan make an unexpectedly good team, or are Kaley’s Christmas plans ruined?

SNOWED IN FOR CHRISTMAS offers a lovable cast of characters and heartfelt message about sacrifice, an emphasis on family before career, serving others, and the importance of forgiveness. Aside from the mention of a scandal and Christmas magic taking the place of Jesus, SNOWED IN FOR CHRISTMAS has very little objectionable content. So, MOVIEGUIDE® only advises some light discernment for younger children.

(BB, C, V):
Dominant Worldview and Other Worldview Content/Elements:
Strong moral worldview about the importance of family and with an emphasis on how family should take precedence over someone’s job, plus some Christian, redemptive elements stressing sacrifice, forgiveness and putting others’ needs before your own
Foul Language:
No foul language
Violence:
Some mild physical action like a snowball fight
Sex:
No sex, but there’s a brief mention of a scandal
Nudity:
No nudity
Alcohol Use:
No alcohol
Smoking and/or Drug Use and Abuse:
No smoking or drugs; and,
Miscellaneous Immorality:
Nothing else objectionable.

SNOWED IN FOR CHRISTMAS is a delightful holiday romance movie from UPtv about an Au Pair named Kaley who has to work a few extra days after a snowstorm cancels flights.

Kaley is a hardworking Au Pair and beloved by her host family, the Cunninghams. Entering the holiday season, Kaley is wondering if a job opportunity in social media marketing would be too big of a step. She also doesn’t want to leave the Cunningham family and the two girls she babysits.

As Kaley gears up for one last night with the girls, Mr. Cunningham’s brother, Ethan, knocks at their door. Although Kaley is reluctant to let Ethan in the house, his two nieces recognize him. Kaley convinces herself it will be just one night, and then she doesn’t need to worry.

In the morning, however, she wakes up to Ethan burning breakfast and realizes that he may make things harder for her and the girls. For most of the day, Ethan is occupied by work. However, in the evening, Kaley, Ethan and the girls see that a snowstorm has canceled Mr. and Mrs. Cuningham’s flight home.

SNOWED IN FOR CHRISTMAS offers a lovable cast of characters and heartfelt messages about sacrifice, an emphasis on family before career, serving others, and the importance of forgiveness. The movie has some light comical violence, such as a snow fight. However, aside from the mention of a scandal and Christmas magic taking the place of Jesus, SNOWED IN FOR CHRISTMAS has very little objectionable content. So, MOVIEGUIDE® only advises some light discernment for younger children.