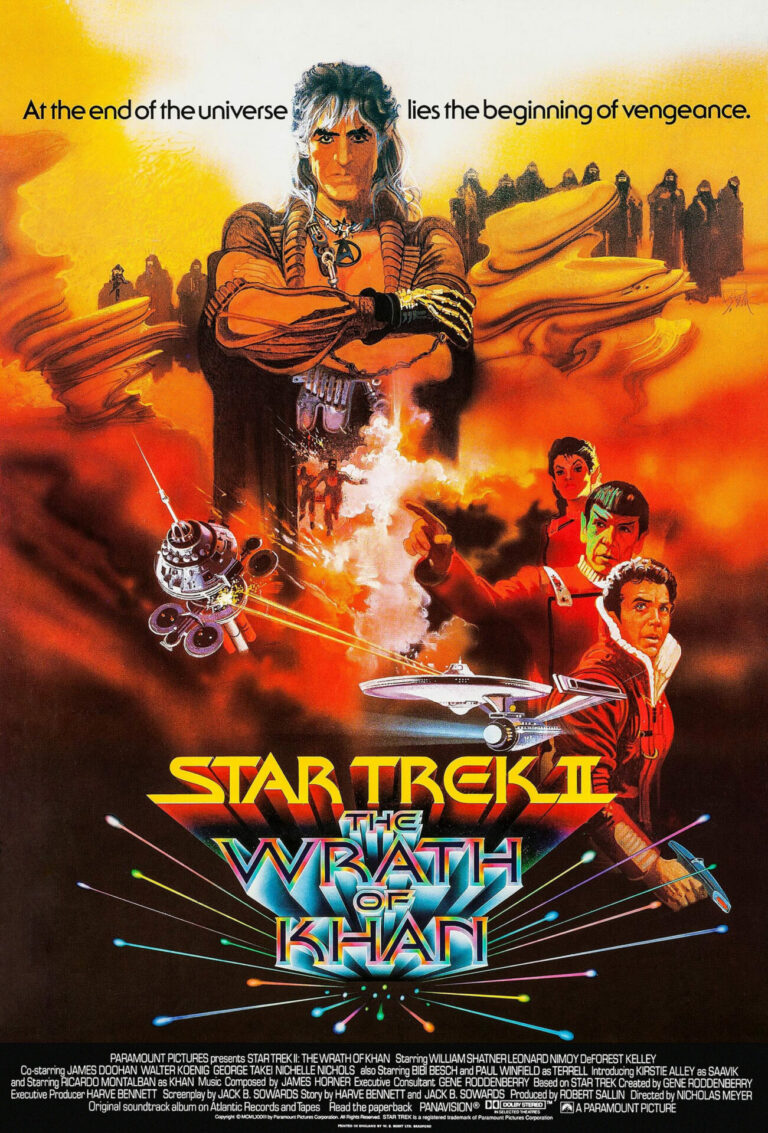 STAR TREK II: THE WRATH OF KHAN is celebrating its 40th Anniversary. One of Captain Kirk’s old enemies, Khan Noonien Singh, is discovered on the planet where Kirk left him. Once a paradise, the planet has become a wasteland. Khan now wants to avenge his wife’s death. Khan tries to steal a device that can destroy a planet but create a new paradise. When Kirk takes the Enterprise to see what’s happening, Khan uses another starship to launch a deadly surprise attack on the Enterprise.

Many consider STAR TREK II: THE WRATH OF KHAN the best STAR TREK movie. Be that as it may, it’s truly a great science fiction adventures. It’s filled with jeopardy, excitement, heartrending moments, and profound themes about life, death, courage, and sacrifice. In addition to themes taken from the Book of Genesis in the Bible, the movie also takes themes from A TAKE OF TWO CITIES and MOBY DICK. After 40 years, THE WRATH OF KHAN still holds up. The movie has some intense violence and some foul language, though. So, caution is advised for older children.

(BBB, CC, PP, L, VV, N, A, M):
Dominant Worldview and Other Worldview Content/Elements:
Very strong moral worldview, with allusions to the first chapter of the Book of Genesis and a verbal reference to the Creation by God in Genesis, stresses and celebrates good defeating evil, heroism in the face of death, new life, and sacrifice by one for the many, with some patriotic sentiments about duty
Foul Language:
There is an SOB obscenity, several “h” and “d” words, and a GD profanity
Violence:
Strong action violence with some blood includes villain puts a creature into a man’s ear to control the man, its implied the villain slaughtered and tortured people on a space station to get information on a powerful device that can make an arid planet team with life but that can also destroy a populated planet while it does this, other people find the victims hanging upside down, man turns gun on himself rather than being forced to kill other people by the creature that’s been placed in his brain through his ear canal, another man infected by another creature collapses rather than trying to obey an evil order, and there’s some blood when the creature crawls out of his ear canal and is shot by a laser-type futuristic gun, space battles between two ships damages both ships, explosions occur on both ships during these battles, Captain Kirk visits one dying young cadet who happens to be the engineer’s nephew, and the young man grabs Kirk’s white uniform collar and leaves a smear of blood on it, major character is fatally wounded in battle, and there are burn marks on his face while he makes on last-ditch attempt to destroy the good guys and their ship, and a character gives his life to save the ship of the good guys but dies of radiation burns
Sex:
No sex, but the story background partly involves a woman having a child out of wedlock and telling the father to stay away because of his commitment to a military space force and space exploration
Nudity:
Partial upper male nudity
Alcohol Use:
Light alcohol use
Smoking and/or Drug Use and Abuse:
No smoking or drugs; and,
Miscellaneous Immorality:
Villain is motivated almost entirely by revenge, so much so that he’s blinded by it, so the movie implicitly rebukes this obsession, plus woman doesn’t tell man that she had a baby out of wedlock.

STAR TREK II: THE WRATH OF KHAN, considered by many to be the best Star Trek movie, is celebrating its 40th Anniversary in theaters. The movie tells what happens when one of Captain Kirk’s old enemies, Khan Noonien Singh, is discovered on the planet where Kirk left him, a planet that was once a paradise but has become a vicious wasteland, and Khan now wants to avenge his wife’s death. STAR TREK II: THE WRATH OF KHAN is one of the greatest cinematic adventures, with an exciting story filled with heroism, courage and sacrifice, but it has some intense violence and some foul language that warrant caution for children.

The movie opens with Mr. Spock teaching a training exercise with a bunch of young cadets, led by a beautiful young woman named Saavik, who’s part Romulan and part human. The exercise, however, is a no-win scenario, so the cadets fail the exercise.

Enter Captain Kirk, who’s now Admiral. Saavik complains to Kirk that there’s no way to win in the test, but Kirk tells her that cadets in Starfleet must learn how to face difficult, no-win situations. They also must learn how to deal with death, not just life.

It’s Kirk’s birthday, so Spock gives Kirk a first edition of Dickens’ A TALE OF TWO CITIES. Kirk reads the first sentence, “It was the best of times and the worst of times,” and asks Spock if he’s trying to tell him something on his birthday. Spock says no, adding that he knows of Kirk’s fondness for first editions.

That night, Dr. McCoy visits Kirk’s apartment and presents Kirk with a pair of antique glasses for his failing close-up eyesight. Kirk doesn’t seem pleased about getting older, so McCoy gets angry. He advises Kirk that he needs to get out from behind his desk at Starfkleet and command a starship once again.

Cut to Lieutenant Chekov visiting a wasteland planet with terrible desert winds. He finds a space pod and enters it. The pod is from the USS Botany Bay, the ship that carried murderous tyrant Khan Noonien Singh and his gang of genetically enhanced humans away from Earth. Kirk’s ship, the Enterprise, had found the pod drifting in space and revived the crew, only to have Khan try to take over Kirk’s ship. Kirk won the battle, and left Khan and his people on a planet that was a paradise, but one with some issues that would present a challenge for Khan, his people and one of Kirk’s female crew, who fell in love with Khan.

Khan and his men show up, subdue Chekov. Khan tells Chekov that the planet he’s on was turned into a wasteland when the planet next to it crashed into it. They insert a creature into Chekov’s ear that will wrap around his brain and make Chekov very susceptive to suggestion. Khan takes over Chekov’s ship, the Reliant. On the ship, Khan learns that the Reliant was looking for an appropriate lifeless planet to test the “Genesis Device” on the planet. The device is so powerful it can transform a lifeless planet into a paradise. It can also, however, destroy a beautiful, populated planet to create a new “paradise.”

Kirk gets a message from the head scientist of the Genesis project, Carol, an old flame of Kirk’s who had his baby but asked Kirk to stay away, because, at the time, they would be separated for years at a time because of Kirk’s commitment to Starfleet. She complains to Kirk that Starfleet is trying to take the Genesis project away from her. He tries to tell her that that’s not true when their communication is cut off somehow.

So, Kirk, Spock, McCoy, and the Enterprise, along with the new cadets, take off for the space station and asteroid where Carol is supervising the Genesis project to see what’s happening. When they get there, however, Khan uses the Reliant to launch a surprise attack on the Enterprise. People die, and Kirk and McCoy are stranded on the asteroid with Carol and Kirk’s son, David.

However, Kirk has some tricks up his sleeve, but the story ends with a great tragedy accompanied by a great victory. At what cost, though?

STAR TREK II: THE WRATH OF KHAN is considered by many to be the best STAR TREK theatrical movie. Be that as it may, however, it is truly one of the great science fiction adventures. It’s filled with jeopardy, excitement, heartrending moments, and profound themes about life, death, courage, and sacrifice. In addition to themes taken from the Book of Genesis in the Bible, the movie also takes themes from A TAKE OF TWO CITIES and MOBY DICK. After 40 years, THE WRATH OF KHAN still holds up. The movie has some intense violence and some foul language, though. So, caution is advised for older children.

Repeated viewings of THE WRATH OF KHAN are well worth the time and effort, not just to STAR TREK fans, but to science fiction fans and fans of good movies in general.