"Faith and Forgiveness Are Key to Life" 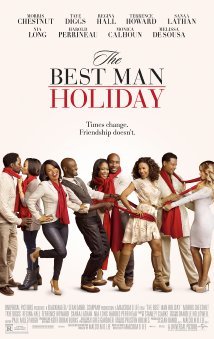 In THE BEST MAN HOLIDAY, a group of African-American friends gets back together for Christmas weekend at the sprawling mansion of Lance and Mia. Lance is approaching his final NFL football game. But, all isn’t well. Mia is secretly ill, and Harper, Lance’s agnostic friend, just lost his teaching job and his agent rejected his latest novel. Harper is desperate to make money, because his wife is about to give birth after multiple miscarriages. So, he decides to sneak his way through the weekend, taking notes and trying to convince Lance to let him write his biography. The problem is, Lance is still angry at Harper for past indiscretions.

THE BEST MAN HOLIDAY is an impeccably made, surprisingly touching comedy, with a strong Christian worldview extolling faith, prayer, marriage, and forgiveness. The movie uses the Christmas setting effectively. The struggle between Lance and Mia’s bedrock Christian faith and Harper’s agnosticism forms an important subplot. However, the movie contains lots of strong foul language, too much lewd content, and some marijuana references. So, MOVIEGUIDE® advises extreme caution for THE BEST MAN HOLIDAY.

(CCC, BB, PaPa, FR, Ab, LLL, V, S, NN, AA, DD, MM) Very strong Christian worldview and premise with prayer, forgiveness, reconciliation at the end, marriage extolled, three happy marriages with children seen as a blessing from God, one character openly states that God is the most important thing in his life and that an agnostic man needs to pray for God’s guidance in his life, an astonishingly beautiful scene features three young children singing “O Holy Night” at a house party, inspiring their cancer-stricken mother to sing aloud with them, rise to her feet, and hold her hands up with eyes to the sky in an obvious reception of the Holy Spirit, after a tragedy occurs and the agnostic says he doesn’t see how a good God could allow bad things to happen to good people the faith-filled man says God always has a plan, but the positive elements are undercut by pagan, antinomian (or lawless and unbiblical) behavior; at least 52 obscenities (including about 30 “f” words), two GDs, and seven light profanities; violence include an intense catfight between two women with hitting and kicking that’s played for laughs, but after the fight, the two women; three implied sex scenes between married couples include one couple about to have sex yet still clothed, one couple under sheets with the man’s bare shoulders showing, and a husband is giving his wife a sensual back massage, plus implied fornication between unmarried man and woman, jokes about one man sending nude photos by cell-phone, crude verbal references, and subplot involves married woman’s past as a stripper and a past indiscretion that causes a rift in her marriage; brief upper female nudity from the past shows up very briefly in a video and shots of upper male nudity; alcohol use and brief drunkenness shown; woman with cancer uses medical marijuana, plus a comical scene with a man stoned on marijuana; and, strong miscellaneous morality such as gossip, harboring anger and resentment, and severe arguments, but followed by touching moments of forgiveness and reconciliation.

THE BEST MAN HOLIDAY is an impeccably made, surprisingly touching, faith-filled comedy about successful African-American friends reuniting for the Christmas weekend and the entanglements that ensue. A sequel to the 1999 movie THE BEST MAN, it has a highly Christian worldview and premise, undercut, however, by pagan content, including strong foul language and some lewd references.

The original THE BEST MAN launched the careers of Taye Diggs, Morris Chestnut, Terrence Howard, Harold Perrineau, Nia Long, Sanaa Lathan, Monica Calhoun, and Regina Hall to greater heights. With its highly positive portrayal of African-Americans twentysomethings who are successful in the white-collar world rather than gangsters or jive-talking clowns in the vein of Chris Tucker in the “Rush Hour” movies, THE BEST MAN became a trendsetter and perennial favorite on DVD and Cable TV.

Here, the stars and Writer/Director Malcolm D. Lee team up for a long-awaited reunion movie that’s an improvement on the original in every way. THE BEST MAN followed its characters as they came together for the wild wedding weekend of Lance (Chestnut), a pro football running back who was getting married to Mia (Hall). The conflicts began when Harper (Diggs) was busted by his friends for writing a juicy novel that was a thinly veiled tell-all about his friends’ darkest secrets and romantic entanglements, with a mix of funny and serious consequences ensuing over the course of the weekend.

In THE BEST MAN HOLIDAY, the gang is getting back together for Christmas weekend at the sprawling mansion of Lance and Mia. Lance is approaching his final NFL game – and the chance to set the all-time rushing record – on Christmas Day. Even so, all is not well. Mia is secretly very ill, and Harper just lost his New York University professor gig and had his latest novel rejected by his own agent.

Harper is desperate to make money, because his own wife, Robyn (Lathan), is about to give birth after multiple miscarriages. So, he decides to sneak his way through the weekend, taking notes and trying to convince Lance to let him write his biography. The problem is, Lance is still angry at Harper for having had a one-night stand with Mia prior to their marriage and for sneaking their lives into his first book.

The other characters have well-drawn conflicts as well, but don’t make the mistake of thinking THE BEST MAN HOLIDAY is overly serious or morose. Rather, Lee and his ace cast find an impeccable balance of laughter and tears throughout the film, which has an impressive energy from the get-go while its predecessor dragged through a long first hour before catching fire in its second.

Lee manages to use the Christmastime setting to genuine effect, rather than feeling like a clichéd backdrop. In fact, the struggle between Lance and Mia’s bedrock Christian faith and Harper’s agnosticism forms an important subplot in the movie. THE BEST MAN HOLIDAY extols marriage and prayer and ends in forgiveness and reconciliation. One character says God is the most important thing in his life and that an agnostic man needs to pray for God’s guidance in his life. Finally, there’s a really beautiful scene where children sing, “O, Holy Night,” inspiring their cancer-stricken mother to sing aloud with them. Despite that, there are plenty of risqué and even raunchy jokes along the way, along with sporadically heavy use of swearing, including many variations of the “f” word.

Thus, THE BEST MAN HOLIDAY is almost schizophrenic at times morally, despite being very solid artistically and spiritually. On the one hand, one could wonder why the filmmakers didn’t just forgo most or all of the swearing and sex talk and broaden his audience out to a more family-friendly one. On the other hand, THE BEST MAN HOLIDAY may be able to hit the secular-minded audiences who need a good morality lesson, a strongly positive portrayal of faith, and a strong portrayal of a God-centered marriage’s ability to transform lives.