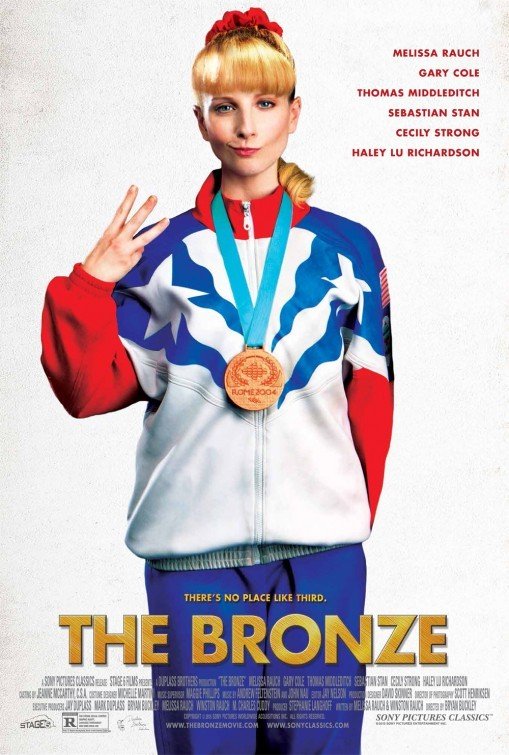 THE BRONZE is a dark, quirky comedy about a former gymnast’s desperate attempt to keep her celebrity status alive in her hometown. Years ago, Hope Ann Greggory helped her team clinch an Olympic bronze medal after severely injuring her ankle. Although her team placed, Hope’s career ended. Hope now lives in her father’s basement in their hometown, Amherst, Ohio, and spends her days milking her celebrity status for free food and favors. Hope is rude to everyone, including her mailman father. Hope gets a chance to train the new local hero, a teenage gymnast named Maggie, for a large sum of money. However, she almost blows her chance at the money.

THE BRONZE is a well-structured, well-acted movie. The ending is uplifting, with some light moral lessons. However, THE BRONZE is filled with foul language, vulgarity and rude insults. Ultimately, the worldview is humanist. At one point, the female protagonist even tells her teenage protégé to always thank her coach first, not God. THE BRONZE has an over-the-top bedroom scene with extreme nudity. Consequently, MOVIEGUIDE® finds THE BRONZE to be abhorrent.

(HH, B, C, Ab, Ho, LLL, V, SSS, NNN, AA, DD, MM) Strong humanist worldview, mitigated slightly by some moral, redemptive elements the end where rude, lewd, selfish female protagonist who’s often disrespectful toward her widowed father learns to show compassion, love, kindness, forgiveness toward others and to serve others without reward, as well as reconcile with her father, who’s really a nice guy, but protagonist tells her new gymnastics protégé to thank her coach first rather than God when she wins, but protégé mentions praying before for her enemies, like Jesus instructed us to do; supporting Christian worldview, main character carries out the Biblical virtue of forgiveness and learning to give while expecting nothing in return, girl references thanking God first when she wins a medal, girl mentions praying before a big gymnastic meet and some homosexual insults; extreme foul language includes at least 107 obscenities (including many “f” words), four strong profanities referring to Jesus and one light profanity during movie itself, plus at least 69 mostly “f” word obscenities in lewd, angry rap song over the end credits, and other rude, vulgar language; woman commits suicide off screen, gymnast breaks ankle during routine but wraps it and carries on to win a bronze medal for her U.S. team, a couple falls during gymnastic routines and practice sessions; very strong and strong sexual content includes many crude sexual insults and references when female protagonist lashes out at people, depicted sex and sodomy between totally nude young man and young woman around a hotel room, and female protagonist engages in self abuse under covers of her bed; lengthy athletic sex scene features total female nudity and rear male nudity; alcohol use and brief drunkenness; female protagonist snorts something and smokes marijuana a couple times; and, young woman living at home shows rude disrespect toward mailman father and other people though he treats her nicely, jealous woman deliberately gives bad advice to younger woman she’s training as a gymnast, father lies to mean daughter hoping the lie will transform her into a better person, but the lie at first backfires, stealing, greed, protagonist cheats on her new boyfriend but later apologizes and also reconciles with her father, who’s treated her nicely.

THE BRONZE is a witty, dark comedy written by husband and wife duo Melissa and Winston Rauch, telling the story of an unlikely, foul-mouthed American gymnastic hero who can’t let go of her past.

A decade ago, Hope Ann Greggory (Melissa Rauch) was America’s sweetheart. During the Olympics, she tore her Achilles. She continued her performance and helped her team win the bronze that year. Afterwards, she returned to her hometown of Amherst, Ohio, where she was treated with stardom. The little town posted pictures of her, begged for her autograph and treated her like a star wherever she went. Sadly, this stardom didn’t last long because her injury marked the end of Hope’s career as a gymnast, a truth she refused to believe.

Cut to present day. Hope lives in her dad’s basement, milking whatever free stuff she can get from that one liberating moment when she helped her team clinch the bronze medal. She still wears her USA uniform, but spends most of her days stealing money from letters in her dad’s postal bag in order to supply her drug addiction to marijuana and anything she can get.

Just when things couldn’t get worse, Maggie, a sweet, local brunette teenager with adorable dimples, begins to surpass her gymnastics abilities. Amherst, Ohio loves Maggie and for that reason Hope despises her. The talk is Maggie has the talent to clinch a gold medal, far surpassing Hope’s bronze, which further increases Hope’s hatred towards this younger, fresh new talent. Hope wants nothing to do with Maggie until an unassuming letter arrives in her mailbox.

Hope’s old gymnastic coach, who’s been training Maggie, has committed suicide. Hope’s father reads a letter from her old coach, which grants Hope all of her $500,000 fortune on one condition: she must train Maggie and get her to the Olympics in Montreal, Canada. This is the last thing Hope wants to do, but the lure of so much money is impossible for Hope to resist.

When Hope walks into the gym to train Maggie, however, she does everything in her power to make sure she fails. She demands her to eat fast food, distracts her from focusing by encouraging her to make out with her boyfriend and makes power smoothies filled with marijuana for her to drink. Innocent little Maggie, adores Hope and does whatever she asks of her until winning gymnast, Lance Tucker, arrives to scout Maggie. When he sees what Hope has done to Maggie, he’s enraged and wants to train her, but Hope realizes that she’s hurting her chances of getting the $500,000. Hope begins to train Maggie the way a coach should.

However, when they get to Montreal, a couple plot twists threatens everything, including Hope’s budding romance with a nerdy high school classmate whose father owns the gym in Amherst where Maggie trains.

THE BRONZE is a well-structured, well-acted movie. The ending is uplifting, with some light moral lessons. However, the rest of THE BRONZE is filled with foul language, vulgarity and rude insults. Ultimately, the worldview is quite humanist. At one point, the female protagonist even tells her teenage protégé to always thank her coach first, not God. THE BRONZE also has an over-the-top bedroom scene with extreme nudity. Though the protagonist becomes a nicer person, her own worldview is still godless. Consequently, MOVIEGUIDE® finds THE BRONZE to be abhorrent.

The movie is co-written by one of the stars of television’s THE BIG BANG THEORY, Melissa Rauch, and her husband, Winston. As writers, they would do better doing more wholesome, more conservative projects.