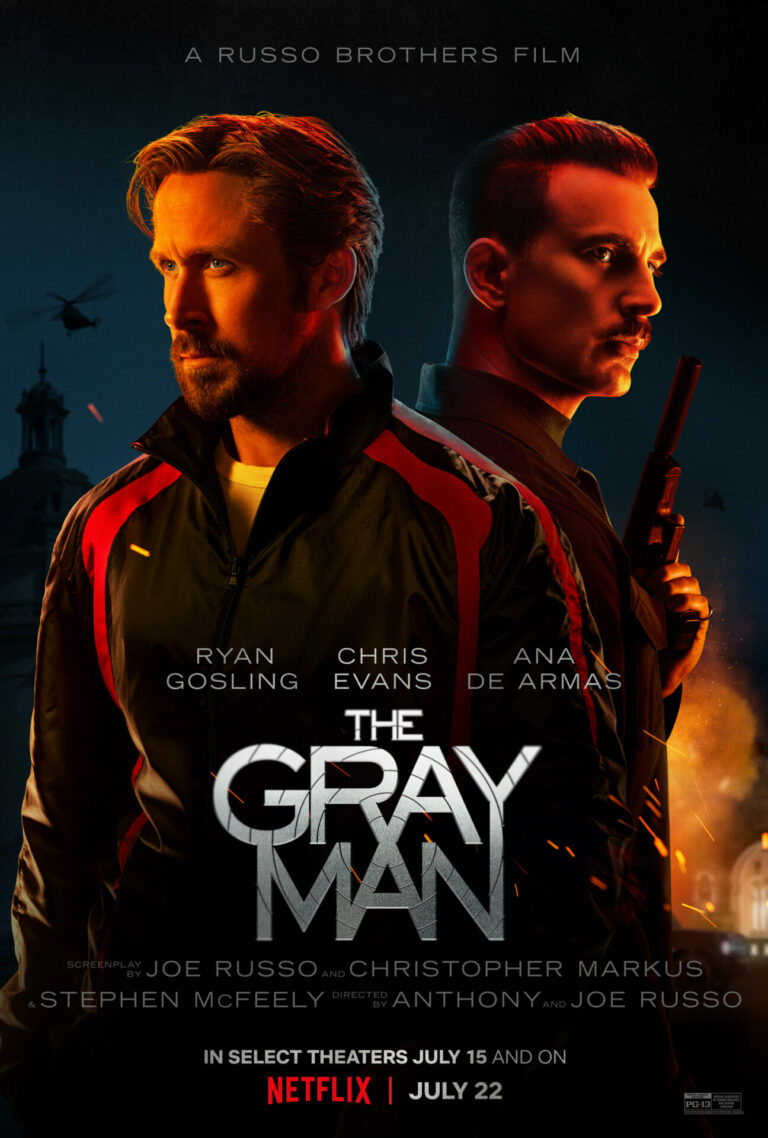 THE GRAY MAN follows the globetrotting adventures of a CIA hitman whose codename is Sierra Six. Sierra Six is sent to kill a rogue fellow agent and retrieve a necklace containing digitized top-secret intelligence. The target is trying to sell the info to foreign enemies, and Six is ordered to stop him at any cost. Six manages to kill the rogue agent and take possession of the necklace when his CIA boss turns on him and sends agents to kill him. A gleefully sadistic sociopath is in charge of that mission.

THE GRAY MAN is directed by the brothers who made AVENGERS: ENDGAME. Its $200 million budget makes it the most expensive Netflix movie ever made. The money is all on the screen; the movie’s explosive mayhem includes several jaw-dropping action sequences. In the third act, however, the action is marred by repetitive fight scenes and gunfights that have been seen many times. THE GRAY MAN is undeniably entertaining much of the time, but the movie wallows in far too much intense violence. It also has many obscenities and three strong profanities.

(B, LL, VVV, A, MM):
Dominant Worldview and Other Worldview Content/Elements:
Light moral worldview in a kill or be killed spy scenario as the spy hero with a conscience tries to stop a vicious and sadistic killer from killing him, but in the process, he is saving his mentor’s vulnerable young niece
Foul Language:
Seven “s” word, “punch you in the d**k” said twice, one a-hole, two “h” words, one “b” word, one “a**,” one Jesus profanity, one JC profanity, one Christ profanity, and one light profanity using the word God
Violence:
Extreme, intense violence overall includes constant, intensely violent shootouts with all manner of firearms and missile launchers, a massive car chase that “destroys Vienna,” a gleefully sadistic villain tortures one man with electric shock through jumper cables attached to the sides of his mouth and uses pliers to pull off the fingernails of another man, the nails are shown starting to come off and then the victim screams and the bloody nails are seen on a table, constant intensely violent hand-to-hand combat that includes frequent stabbings, a huge fight on a plane causes the plane to explode
Sex:
No sex
Nudity:
No nudity
Alcohol Use:
Some alcohol use
Smoking and/or Drug Use and Abuse:
No smoking or drugs; and,
Miscellaneous Immorality:
A young girl of about 10-years-old is kidnapped and threatened with death by villains even while she’s recovering from pacemaker surgery, she is orphaned and traumatized when she’s pulled away from her last relative caretaker and then watches the explosion that kills him (it’s a lot of menace for a young girl to be experience).

THE GREY MAN is an action-packed, intensely violent thriller made by Netflix in the hopes of competing with MISSION: IMPOSSIBLE and James Bond movies, with Ryan Gosling playing a CIA assassin whose new boss turns on him to cover up some unacceptable activities. As an action-filled spy movie, THE GRAY MAN achieves liftoff for two-thirds of its running time before a weak final act containing repetitive, brutal violence and child endangerment becomes too off-putting.

The movie follows the globetrotting adventures of a CIA hitman whose codename is Sierra Six (Ryan Gosling). Six is sent to kill a rogue fellow agent and retrieve a necklace that contains a Sim card filled with top-secret intelligence. The target is trying to sell the info to foreign enemies, and Six is ordered to stop him at any cost.

Six manages to kill the rogue agent and takes possession of the necklace when his new CIA boss turns on him and sends agents to kill him. A gleefully sadistic sociopath named Floyd Hansen (Chris Evans) is put in charge of the mission to find and kill Six. Hansen unleashes numerous other teams of hitmen to get the job done.

With the help of his sidekick Dani Miranda (Ana de Armas) saving him in one incredible action sequence after another, Six escapes some of the wildest predicaments ever put to film. His mentor, Fitzroy (Billy Bob Thornton), gives him wise advice from afar until his own young niece is kidnapped and endangered.

Can Six manage to get the necklace into safe hands? Will he able to save Fitzroy’s niece from extreme peril?

THE GRAY MAN is directed by Joe and Anthony Russo (AVENGERS: ENDGAME). Its $200 million budget makes it the most expensive movie Netflix has ever filmed. The money is all up on the screen, as the explosive mayhem creates several jaw-dropping action sequences. However, the action is somewhat marred by repetitive hand-to-hand combat scenes and gunfights that have been featured thousands of times in other movies.

THE GRAY MAN is undeniably entertaining much of the time, but the movie wallows in far too much intense violence. For example, the movie’s entire second half consists of people trying to kill each other in endless myriad ways. There are also two torture scenes. The sheer level of brutality bears exploring in some moral and ethical ways.

THE GRAY MAN is emblematic of how the MPA ratings board gives a free pass to just about any level of violence in PG-13 movies, as long as the characters don’t say the “f” word or en gage in explicit sex or nudity. While those other factors are definitely immoral, this kind of intense violence can negatively impact children and teenagers and even desensitize adults, as hundreds of thousands of studies have proved.

The constant action in superhero movies may indeed largely excusable because the characters involved are so clearly fantasies, and therefore not as big a problem. However, THE GRAY MAN features human beings stabbing each other in closeup many, many times, and features two torture scenes that are too sadistic.

The most troubling aspect of all this concern lies in the fact that children will soon be able to easily watch THE GRAY MAN on Netflix because its PG-13 rating is unlikely to receive preventive viewing measures for young viewers. Parents are likely to assume the PG-13 rating makes it safer for older children, the presence of a young girl in a prominent role might further draw kids into wanting to see THE GRAY MAN and parents to trust it.

On the upside, Ryan Gosling and Ana de Armas as the two main heroes. They make a fun team that help each other through endless danger. Also, although he’s a thoroughly unpleasant character in the movie, Chris Evans delivers some quirky notes in his performance as the sadistic bad guy.

Another problem with THE GRAY MAN lies in the fact that the movie constantly hopscotches to far-flung locations around the world, with titles spelling out each location. However, this becomes annoying when so little happens in each spot that the movie’s settings blur together, except for one of the greatest chases of all time in Vienna, where the characters pummel the city. Aside from Vienna, it seems obvious that the filmmakers never actually shot scenes in most of the foreign locations.

THE GRAY MAN offers an impressive, action-packed experience, but should absolutely not be seen by pre-adolescent children, most teenagers and many adults due to its nonstop, excessive violence. THE GRAY MAN also has many obscenities and at least three strong profanities.