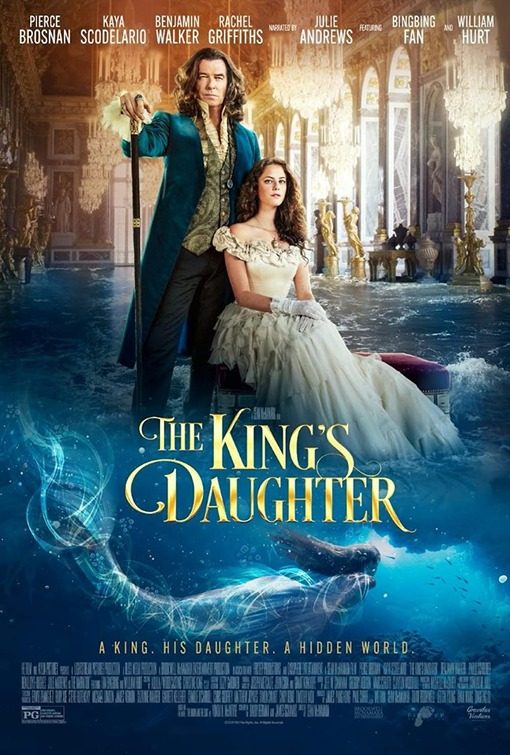 THE KING’S DAUGHTER is a fantastic adventure fantasy. The French king, Louis XIV, is obsessed with his mortality and the country’s future. He asks the royal physician to help him obtain the key to immortality. The royal physician believes mermaids contain a force that grants everlasting life. Louis is doubtful, but he commissions a young sea captain to search the seas for a mermaid. The captain brings back a female to the King’s court. Meanwhile, King Louis orders his orphaned daughter, Marie-Josèphe, brought to Versailles. Marie establishes a connection with the mermaid and falls for the sea captain. Together, they try to save the mermaid’s life.

THE KING’S DAUGHTER is beautifully photographed. Part of it was filmed at the former royal palace at Versailles. This magnificent setting adds a lot to the movie’s excitement and drama. THE KING’S DAUGHTER has a strong Christian worldview. For example, the King’s priest tells the King he’s endangering his mortal soul if he kills the mermaid. The priest preaches repentance and forgiveness, and the Holy Trinity is worshipped at a crucial point in THE KING’S DAUGHTER.

(CCC, BB, FR, O, V, A, M):
Dominant Worldview and Other Worldview Content/Elements:
Very strong Christian worldview in a Catholic with priest talking about endangering your mortal soul, priest gives the King confession, a salvation scene with a strong reference to the Holy Trinity, the priest becomes a powerful, positive spiritual advisor, the priest in the story says, “I work for The King; I serve God,” people make a point of saying God willing concerning a dangerous plan, and the priest tells the King that only God has the power of eternal life, with strong moral elements promoting doing the right thing, plus the mother superior at a convent has a legalistic view of swimming, and the King at first takes a cavalier position toward his regular morning confessions with the royal priest, and the story involves magical fairytale mermaids with healing powers and a search for the Lost City of Atlantis
Foul Language:
No foul language
Violence:
Some light violence and peril such as girl on horse hits a branch and falls and breaks her arm, girl smashes instruments after discovering her father, the King, plans to steal her mermaid friend’s life force, some fighting, and a big chase scene
Sex:
No sex, but King confesses to priest about two women who visited his bedchambers on two separate nights
Nudity:
No nudity
Alcohol Use:
Background alcohol use
Smoking and/or Drug Use and Abuse:
No smoking or drugs; and,
Miscellaneous Immorality:
A mention of fate, King tries to force daughter to marry a wealthy duke to fill the depleted treasury, women at the court are jealous and snobbish.

Known as The Sun King, Louis XIV is the most powerful and influential monarch on the planet. Obsessed with his own mortality and the future of France, Louis turns to his spiritual advisor, a Catholic priest, and the royal physician to help him obtain the key to immortality.

The royal physician believes mermaids contain a force that grants everlasting life. Though Louis is doubtful, he commissions a young sea captain to search the seas and capture one of the mystical creatures. He finds a female swimming with a male, captures her and brings her back to the King’s court at Versailles.

Meanwhile, King Louis orders his orphaned daughter, Marie-Josèphe, be brought to Versailles. Marie doesn’t know she’s the King’s daughter. Her mother died in childbirth at a convent, and she doesn’t know who her father is. Having access to all the trappings surrounding the King’s court at Versailles, Marie turns out to be an elegant, spunky young woman. She also begins to have a special connection to the mermaid through music and falls in love with the mermaid’s captor, the handsome young sea captain, Yves.

The King’s physician plans to extract the mermaid’s magical life force at the celebration of a rare solar eclipse. However, when Marie finds out the King’s intentions, she convinces Yves to help her save the mermaid’s life.

THE KING’S DAUGHTER is beautifully photographed. Part of it was filmed at the former royal palace at Versailles in France. This magnificent setting adds a lot to the movie’s excitement and drama. The cast, led by veterans Pierce Brosnan and William Hurt, who play the King and the King’s priest, respectively, seems to be inspired by the setting and the movie’s charming, lively fairytale story.

THE KING’S DAUGHTER has a strong Christian worldview. For example, the priest tells the king he’s endangering his mortal soul if he has the mermaid killed. Also, repentance and forgiveness are preached, and the King makes a strong reference to the Holy Trinity at a crucial point in the story. These inspiring Christian references and messages become part of the main plot in THE KING’S DAUGHTER about the mermaid and saving her life.