"Reconciliation Is the Main Event" 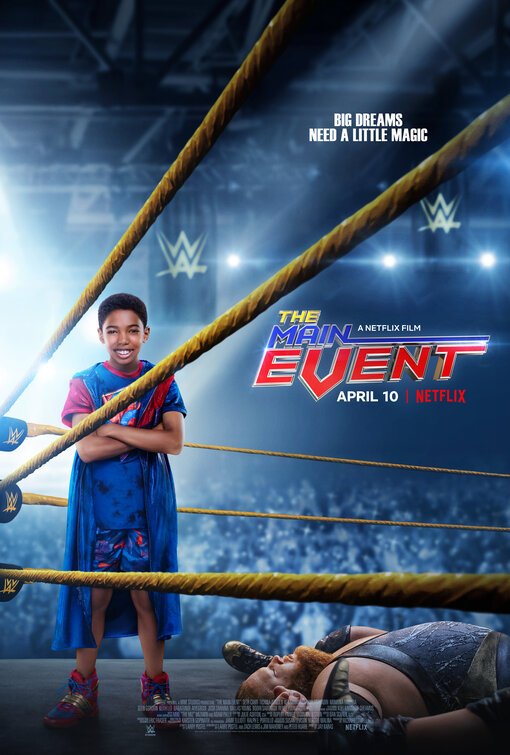 THE MAIN EVENT Review: Family and Reconciliation Win the Day

Finally a Netflix movie with family at the heart of the story with clean laughs a long the way!

THE MAIN EVENT follows an 11-year-old professional wrestling fan named Leo. One day, Leo hides from school bullies and finds a magical wrestling mask that gives him super strength to take on anyone in the ring. Leo hears there’s a wrestling contest in his hometown. So, he enters with the hopes of winning the cash prize to help his family financially.

THE MAIN EVENT is produced by World Wrestling Studios, which explains the fun cameos of popular wrestlers from the company. The movie is surprisingly funny and heartwarming, with plenty to keep viewers entertained. Also, the child actors are extremely talented. THE MAIN EVENT has a strong moral worldview stressing honesty, reconciliation, friendship, and hard work. Also, Leo’s grandmother tells him that real strength lies in a person’s head and heart, not just his physical appearance. Thus, THE MAIN EVENT has lessons that are valuable for the whole family. However, some brief but light foul language, wrestling violence and references to magic in THE MAIN EVENT warrant caution for younger children. Eventually, though, Leo learns that magic isn’t as powerful as the human heart.

(BB, O, L, V, N, M):
Dominant Worldview and Other Worldview Content/Elements:
Strong moral worldview where characters admit their wrongdoings and reconcile, friendship and family and honesty are extolled, and hard work is valued, plus lead character uses a magical mask to strengthen him but comes to find that magic is not as powerful as the human heart
Foul Language:
No obscenities, seven light profanities (mainly OMG), one butt, and scenes where a character passes gas and burps as a wrestling strategy
Violence:
Wrestling violence, characters put each other in headlocks, flip onto others and slam against one another and other similar actions, and bullies threaten to beat up others
Sex:
No sex, but a grandmother is attracted to a wrestler much younger than she is
Nudity:
Upper male nudity during wrestling scenes, female wrestler wears a bikini-type outfit
Alcohol Use:
No alcohol
Smoking and/or Drug Use and Abuse:
No smoking or drugs; and,
Miscellaneous Immorality:
Trickery to satisfy personal gain, but it doesn’t prevail, name-calling, character gives the school bullies a weggie, grandmother jokes that if her grandson gets hurt wrestling she will “kill” him, and a woman leaves her spouse and child for another man.

THE MAIN EVENT is a family comedy about an 11-year-old professional wrestling fan who finds a magical wrestling mask that gives him super strength, so he enters a wrestling contest to win the cash prize and help his family financially. Funny and heartwarming, THE MAIN EVENT has a predominant moral worldview stressing honesty, reconciliation, family, friendship, and hard work, but MOVIEGUIDE® advises caution for younger children because of brief but light foul language, wrestling violence and references to magic.

Leo was just a normal 11-year-old kid until one day, while outrunning his bullies from school, he finds a smelly wrestling mask hidden in a drawer of an open house. Leo is a huge World Wrestling Entertainment (WWE) fan and puts on the mask at home and realizes that he’s different after it’s on his person. All of a sudden, Leo can hold enormous amounts of weight and has a deeper voice, making him more mature than he actually is for his age.

On the home front, Leo lives with his father and maternal grandmother, Leo’s dad works two jobs to sustain their lifestyle but frequently is tired and not up for challenging conversations with his son. Leo’s grandma, who wants to become a social media influencer helps Leo with more of his daily activities. Viewers learn that it’s just the three of them because Leo’s mother is gone, but that topic seems to be off the table for conversation, at least with Leo’s dad.

One night, Leo overhears his grandma and dad talking about their financial struggles. Leo gets the bright idea to sign up for a WWE contest coming to his hometown. If he wears the mask, he’s golden and can win the $5,000 cash prize to help his family.

Leo asserts his wrestling alter ego, Kid Chaos, and advances to the next round of competition with ease. However, his grandma catches him sneaking in late one night and makes Leo cough up his story. Surprisingly, she’s fine with it and supports his efforts to help his family. A different day, Leo uses the mask to put an end to the meanness of his school bullies and woos his crush Erica. Erica and Leo’s posse of misfits become good friends. Then, while having lunch one afternoon, Leo comes clean with his friends about his secret identity as Kid Chaos as he single-handedly stops a robber from taking money.

Now that his close circle knows the power of Leo’s mask, he feels more relaxed, but he still has the final match to prepare to win. Erica and Leo also team up to participate in the school talent show but when his wrestling event and the talent show are the same night, Leo faces a major conflict. Not to mention, Leo’s opponent for the night has some tricks up his sleeve to dethrone Kid Chaos and look out for his own self-interest.

How will Leo/Kid Chaos handle the odds against him?

THE MAIN EVENT is produced by WWE Studios, which explains the fun cameos of popular wrestlers from the organization. THE MAIN EVENT is funny, engaging and heartwarming, with plenty to keep viewers entertained during the course of the movie. Also, the child actors are extremely talented.

THE MAIN EVENT has a predominant moral worldview that stresses honesty and reconciliation. Also, Leo’s grandmother tells him that real strength lies in a person’s head and heart, not his physical appearance. Friendship and the value of hard work also play a key role in THE MAIN EVENT. Thus, the movie has strong lessons that are valuable for the whole family, but some brief but light foul language, wrestling violence and references to magic in THE MAIN EVENT warrant caution for younger children. Eventually, though, Leo learns that magic isn’t as powerful as the human heart.