"Marred by Political Correctness, Obscenities and a Slow, Uneven Pace" 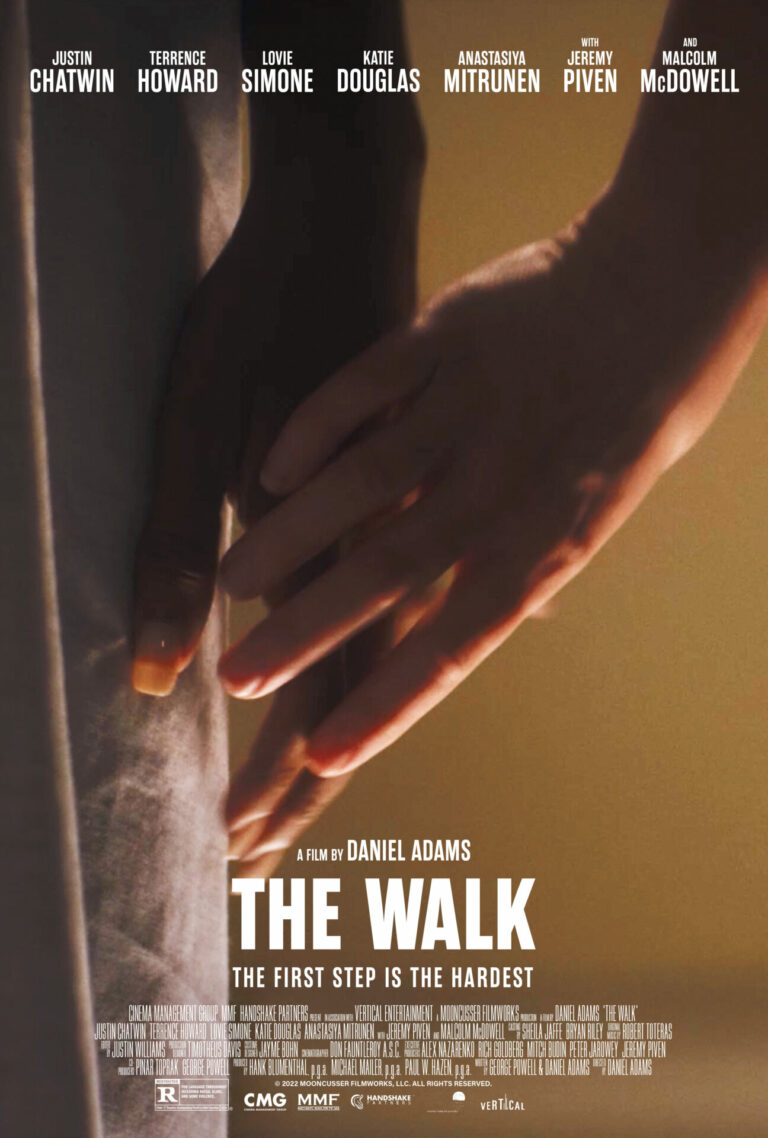 THE WALK is a drama set in 1974 during the turmoil in Boston over a judge’s ruling forcing government schools to desegregate by busing white and black students. Bill, a white Catholic cop, and his wife try to control their teenage daughter, Kate, who’s secretly seeing the white racist son of a man Bill put in jail. Bill is ordered to protect the black students being bused to Kate’s school. Pressure mounts when the local Irish mob boss and many of Bill’s fellow officers decide to let the black children fend for themselves against angry white protestors.

THE WALK focuses on personal drama rather than political issues, or the pros and cons of forced school busing. The movie also focuses on the importance of doing the right thing, loving thy neighbor and standing up against racism. The filmmaker and actors do a good job, but the story is too slow. It’s also too politically correct, making white people the problem and turning black people into just victims. THE WALK also has about 76 “f” words and more than two dozen other obscenities and profanities.

(CC, BB, Ro, FR, PCPC, AP, LLL, VV, S, AA, DD, M):
Dominant Worldview and Other Worldview Content/Elements:
Strong Christian, biblical worldview has multiple positive references to Christian faith (including Roman Catholic faith), promotes doing the right thing, loving thy neighbor, standing up against racism, equality, and sacrifice (specifically, putting your life on the line to protect and help other people), marred by some Romantic elements (including a line suggesting the false belief that people are basically good), and strong political correctness supporting social experiments by big government, and seeing white people as racial oppressors and black people as just victims of systemic racism by whites, plus a line of dialogue declares that, even after the passage of the Civil Rights Act in 1965 and other reforms in the 1960s, American society in 1974 was still systematically racist against black criminals compared to white criminals (there are no caveats about the society getting better)
Foul Language:
At least 101 obscenities (including 76 “f “ words), several strong profanities a few light profanities, and some racial epithets such as the “n” word and “cracker” (one teenage girl’s father and especially her mother rebuke her use of the “n” word)
Violence:
String and light violence includes high school student punches another student in the face multiple times in a fit of jealous rage, teenager girl throws rock at passing car because the passengers are black, a man is shot during a riot by the movie’s racist villain who was aiming a black teenage girl who was bused from her black neighborhood to a school in a white neighborhood, mother slaps her teenage daughter when daughter uses a rude racial epithet about black people, brief discussion about a past incident where a man beat his wife and then killed his wife’s black lover, and threats of violence
Sex:
Some light references to illicit sex and adultery, and there’s a heavy kissing scene between two teenagers
Alcohol Use:
Some scenes with alcohol use, including man drinks beers after coming home from work and police arrest a drunken criminal
Smoking and/or Drug Use and Abuse:
Some smoking and people seem to be smoking marijuana in one or two scenes;
Miscellaneous Immorality:
Racism, but mostly rebuked.

THE WALK is a drama set in 1974 about a white Irish cop in South Boston who’s up against dangerous opposition when he’s ordered to protect black students, when a judge forces the city to bus some schoolchildren across town between a white area and a black area in Boston. THE WALK focuses on personal drama rather than political issues, or the pros and cons of forced school busing, and takes a Christian, biblical position against racism, but the story is a little too slow and politically correct, and has some strong violence, at least 76 “f” words and more than two dozen other obscenities and profanities.

Bill Coughlin is a Boston cop who loves his family and tries to do the right thing. His job on the beat becomes more difficult as the racism of his fellow cops is heightened. His partner is openly racist. Police brutality against black people is the daily bread. Bill wants to “get by” under the broken system. Still, when push comes to shove, he strives to help everyone, including a man who stole baby formula from a store to feed his new baby. The other cops catch wind that Coughlin may not agree with the racist “group think” of the brotherhood of cops.

Meanwhile, an old nemesis, Johnny Bunkley, gets out of prison. The convicted murderer has an old grudge against Bill and wants to kill him. The local Irish mob boss, McLaughlin, has a fatherly affinity for Bill, however. He continuously tries to recruit Bill’s support instead.

Bill has a teenage daughter, Kate, in the local high school. Secretly, Kate has fallen in with John, the racist son of her father’s nemesis, Bunkley. In one scene, John viciously beats up another teenage boy who’s interested in Kate. In another scene, Kate takes part in a racial attack with John on a car driven by a black paramedic and his daughter. They throw rocks at the car and break the rear window. Kate angrily opposes the judge’s order to integrate her school. Her father, Bill, and her mother, Patty, don’t agree with the busing order either, but they try to curb any racism in Kate. They aren’t happy when they learn Kate has lied to them about hang around John and his racist friends.

Bill finds himself in the middle of more complexities and intense racism when his boss orders him to team up with a black policeman to protect the black students being bused to Kate’s school. The story intensifies when Bill’s fellow white police officers decide not to show up on the first day of busing the schoolchildren. McLaughlin aggressively opposes any attempt to integrate the schools and tries to pressure Bill to join his fellow officers.

Bill must decide whether to carry out his duty as a Catholic Christian and a cop, or stay home to keep his family safe and let the black schoolchildren fend for themselves.

THE WALK focuses on personal drama rather than political issues, or the pros and cons of forced school busing. It also focuses on the importance of doing the right thing, loving thy neighbor and standing up against racism. The filmmaker and actors do a good job, but the story is too slow and unevenly paced. It’s also too politically correct, making white people the problem and turning black people into just victims. THE WALK also has about 76 “f” words and more than two dozen other obscenities and profanities.

However, the movie takes a Christian, biblical worldview toward racism. It has many references to faith and promotes putting your life on the line to protect and help other people. That said, there’s one piece of dialogue suggesting that people are basically good. Also, another line declares that, even after the passage of the Civil Rights Act in 1965 and other reforms in the 1960s, American society in 1974 was still systematically racist against black criminals compared to white criminals. There’s no caveat that things are getting better.

School busing to integrate government-run public schools was a volatile issue in the 1960s and 1970s. Many judges, including the Supreme Court, took it upon themselves to force local school districts to integrate their schools by forcing students to be bused from the schools in their neighborhoods. However, there were better alternatives than busing. For example, the school superintendent in Boston proposed an “open enrollment plan” allowing parents to send their children to any school in the city. His plan would have been more acceptable to the parents and voters and much less costly. However, the judge in the case was not interested, according to Matthew Richer of the Hoover Institute in an article titled “Busing’s Boston Massacre” on Nov. 1, 1998 (https://www.hoover.org/research/busings-boston-massacre). Richer says the judge’s busing fiasco destroyed the local tradition of the annual Thanksgiving football game between South Boston and East Boston high schools. It also led to more white flight from the city to the suburbs, which eventually resulted in more segregated schools in the city. The same thing happened in other cities like Detroit, which became an urban wasteland. Later on in Boston, according to Richer, Mayor Kevin White complained that the judge sought refuge in his own exclusive suburban neighborhood and refused to help him, “the only guy who could make it work.” Meanwhile, like many cities across the nation, the forced busing program in Boston failed to improve the education levels of black students and did nothing to stop the destruction of the black family by the social welfare state.

THE WALK has good commentary on the obligation of Christians to serve and protect others from harm. The movie does a good job showing how long it took our country to institute change, along with the ramifications of letting racism boil to the surface. The points made are often slow and drawn out. The movie is wrought with over 75 profanities, and other obscenities, which along with racially motivated violence, and violence due to jealousy, warrants caution for all audiences.