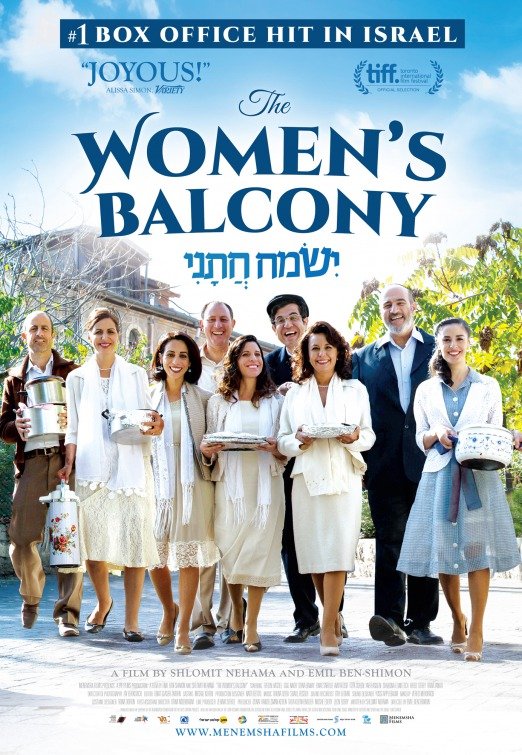 THE WOMEN’S BALCONY is a light comedy from Israel about the conflict between a strict new rabbi and the women in a Jewish Orthodox synagogue in Jerusalem. The synagogue’s balcony reserved for women collapses. The rabbi’s wife ends up in a coma, which causes him to go into a deep depression and take a leave of absence. A new, stricter rabbi takes over, but he refuses to rebuild the women’s balcony. This angers the women and leads to conflict between the men and the women.

Shot entirely in Jerusalem, THE WOMEN’S BALCONY has an authentic look and feel. The Bible is heavily referenced and God is invoked throughout the movie, but there’s also some false Jewish legalism. Ultimately, however, THE WOMEN’S BALCONY has a strong Romantic worldview that promotes religious moderation over religious “extremism.” It does so with an enjoyable comic tone, but its sympathies in favor of the women are clear. THE WOMEN’S BALCONY contains brief foul language and a scene where a small risqué photo of a scantily clad woman is briefly shown. MOVIEGUIDE® advises caution for children.

(RoRo, BB, FRFR, L, V, NN, A, D, M) Strong Romantic worldview promoting religious moderation above religious “extremism,” with overt biblical elements from a Jewish perspective centered on the Hebrew Scriptures and Judaism, God is referenced heavily, Scriptures is quoted, several scenes show prayers or services in a synagogue, and references to biblical stories or characters in several scenes, but also with some false Jewish legalism; two uses of the “d” word, and God’s name is taken in vain twice; a balcony in a synagogue collapses during a service and seriously injures a woman; a small photo in a magazine briefly shows the top half of a woman with her breasts only scantily covered; some wine is consumed at a wedding; two scenes depict cigarette smoking; and, a rabbi forges bank papers.

THE WOMEN’S BALCONY is a light comedy from Israel about the conflict between a strict new rabbi and the women in a Jewish Orthodox synagogue over the rebuilding of the synagogue’s balcony reserved for the women.

During a bar-mitzvah service, the balcony reserved for women collapses in an Orthodox Jewish synagogue in Jerusalem. While the women stand there overlooking the men sitting below, all are able to escape the calamity except for the rabbi’s wife. She’s admitted to the hospital with a serious head injury. This sends the elderly rabbi into a deep depression. He takes a leave of absence while the members of his congregation figure out how to rebuild.

A young, charismatic, ultra-orthodox rabbi, Rabbi David, is invited to join the synagogue for prayers one morning. He quickly takes up the leadership mantle and convinces the men to put him in charge of the rebuilding process. During their meetings, he also convinces the men they’ve been too lenient in their practice of the Jewish faith and begins introducing stricter Orthodox doctrine.

While the men get onboard with the new rabbi’s ideas, the women are suspicious, primarily because they get the short end of the stick. Not only does the rabbi expect them to cover their heads with scarves, he refuses to rebuild their balcony. With a limited supply of money, he insists that paying for a new scripture scroll is the priority. The women are forced to attend worship services in a separate room where they can’t see the rabbi or any of the men.

Though their husbands feel guilty for the imposition, they are pressured to go along with the rabbi’s changes. This ignites a battle of the sexes as the women decide to raise money themselves for the new balcony.

THE WOMEN’S BALCONY is nothing fancy and even comes across as a bit dreary compared to typical American movies. Shot entirely in Jerusalem, it has an authentic feel and look. Since it’s an Israeli movie set in an Orthodox Jewish synagogue, outsiders might have some trouble understanding all of the cultural and religious references. Still, it’s universal enough to be enjoyed by all mature audiences.

The Bible is heavily referenced, and God is invoked throughout the movie, including biblical stories and quotes from Scripture. While God is revered by nearly all the characters, one character in particular doesn’t necessarily believe that God answers prayers or is actively working in the world. There are also many references to Jewish rituals and traditions that come from sources other than the Bible.

Ultimately, THE WOMEN’S BALCONY has a strong Romantic worldview that promotes religious moderation over religious “extremism.” It does so with an enjoyable comic tone, but its sympathies in favor of the women are clear.

A couple scenes depict smoking, and there is some minor foul language. There’s also one scene where a small risqué photo of a scantily clad woman is briefly shown. So, MOVIEGUIDE® advises caution for children.

Rent or Buy THE WOMEN’S BALCONY: