"Some Dreams Can’t Stay Bottled Up" 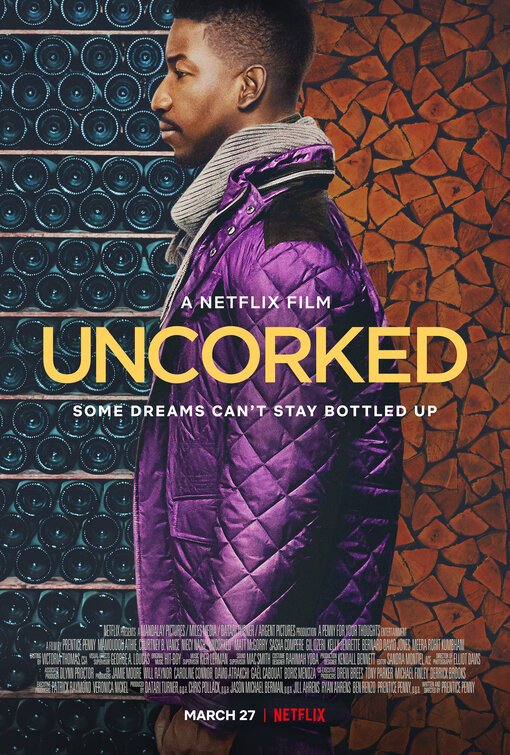 Set in Memphis, UNCORKED follows a young black man named Elijah who finds his passion in wine and pursues his dreams to become a master sommelier (professional wine steward). Although Elijah sees his future in wine, his father wants him to take over the family barbeque restaurant. Elijah goes back to school, studying to become a master sommelier. He even gets a chance to travel to France to study wine, though he has to work two jobs. When a tragedy strikes the family, however, Elijah must choose between his passion and his family.

UNCORKED is very entertaining, with an original storyline. The movie also features a fantastic cast. Watching the characters develop is compelling. UNCORKED has a strong moral, pro-capitalist worldview stressing friendship, sacrifice, hard work, family, and reconciliation. For example, two rivals must work together toward a common goal, a young man helps his father’s business and works to pursue a new vocation, and the young man reconciles with his father. Sadly, however, UNCORKED has lots of strong foul language and other brief lewd content. So, MOVIEGUIDE® advises extreme caution for UNCORKED.

(BB, CapCap, C, LLL, S, N, V, A, M):
Dominant Worldview and Other Worldview Content/Elements:
Strong moral, pro-capitalist worldview with some redemptive elements promotes sacrifice, friendship, reconciliation, family, and hard work, man helps the family business, competitors work together toward a common goal, and man pursues a new vocation, which results in some conflict with his father, but they reconcile after months of strife
Foul Language:
At least 56 obscenities (including “f” words) and many “n” words
Violence:
Two siblings shove each other, dead pig bodies are shown in a slaughterhouse, character dies of a long illness
Sex:
Implied fornication as a man and woman kiss in bed, a woman touches her boyfriend’s genitals and brief sexual dialogue
Nudity:
Upper male nudity and a woman is shown in a bra
Alcohol Use:
Adults drink wine
Smoking and/or Drug Use and Abuse:
No smoking and/or drug use; and,
Miscellaneous Immorality:
Nothing else objectionable.

Set in Memphis, UNCORKED follows the story of a young man named Elijah who finds his passion in wine and pursues his dreams to become a Master Sommelier. UNCORKED is very entertaining with an outstanding cast, an original storyline and some moral, pro-capitalist elements that promote hard work, family, sacrifice, and reconciliation. However, UNCORKED includes lots of strong foul language and some other lewd content requiring extreme caution.

UNCORKED begins as a young man named Elijah is cutting meat in his father’s family barbeque restaurant. Elijah also works a second job at a wine shop, and he looks up to his boss for his title of master sommelier. Elijah meets a young woman named Tanya at the wine shop and recommends his favorite white wine to her. She returns quickly, and she and Elijah go on a date. Elijah reveals that his dream is to return to school to study wine and become a master sommelier. Tanya encourages Elijah to pursue his passion, but he’s hesitant because of his father’s reaction.

Eventually, Elijah decides to sign up for a wine academy where he can study to become a master sommelier. When Elijah tells his father, his father is upset and tries to discourage Elijah. He really wants Elijah to take over the family Memphis barbecue restaurant. However, the rest of Elijah’s family encourages him, and he decides to continue with his idea of school. Elijah works two jobs to pay for the academy tuition and continues studying with a group of classmates.

The academy reveals they’re doing a study abroad trip to Paris, and Elijah worries that he will not have the funds to go. He decides to sell his car, and his family helps him come up with the rest of the money. Elijah travels to Paris and learns more about wine than he ever has.

Meanwhile, back in Memphis, Elijah’s mom has been diagnosed with cancer that has metastasized to her lungs. She has a slim chance of survival; but she doesn’t want Elijah to find out.

One day, Elijah gets a call that his mother has passed away, and he comes home to attend her funeral service. Will Elijah and his father reconcile? Will Elijah pass the master sommelier test?

UNCORKED is entertaining and has an original storyline. The cast does a good job, including Courtney B. Vance, Lashun Pollard, Mamoudou Athie, and Sasha Compere. The movie has a unique storyline about being a master sommelier, a profession that some people might not know exists. The movie is very informative about a career that isn’t always mentioned.

UNCORKED has a strong moral, pro-capitalist worldview stressing friendship, sacrifice, hard work, family, and reconciliation. For example, competitors work together toward a common goal, a young man helps his father with the family business and then pursues a new vocation, and the young man reconciles with his father after months of strife. Sadly, though, UNCORKED has lots of strong foul language and other brief lewd content. So, MOVIUEGUIDE® advises extreme caution for UNCORKED.