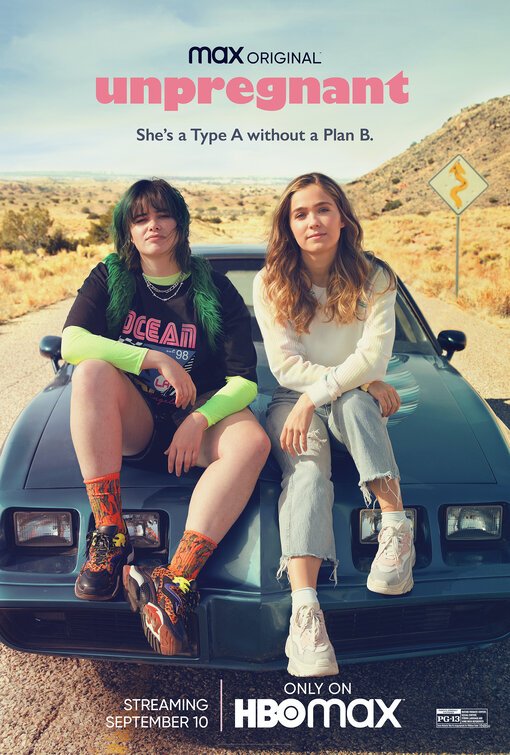 UNPREGNANT follows a 17-year-old Missouri girl, Veronica, who’s found out she’s pregnant. Veronica enlists her estranged best friend, Bailey, to travel to New Mexico with her so that Veronica can kill her baby without her parents knowing. Veronica plans the perfect trip to the baby killing clinic and back before the weekend ends. However, several situations could get in their way of making it to Veronica’s abortion appointment and back without her parents knowing.

UNPREGNANT has some funny moments, but some of the comical situations are too outrageous and unbelievable. The movie has a strong, abhorrent pagan, feminist worldview, with Anti-Christian, politically correct elements. For example, the movie glorifies abortion. Also, it promotes homosexuality when Bailey tells Veronica she’s a lesbian and later kisses another girl. Although the father of Veronica’s baby wants her to keep the child and proposes to marry her, he ends up appearing at the baby killing clinic to “support” Veronica. Finally, the movie depicts pro-life Christians as crazy. UNPREGNANT is part of an abhorrent new effort in Hollywood to promote killing babies and attack the compassionate.

(PaPaPa, FeFeFe, PCPC, AbAb, HoHo, B, C, LLL, VV, S, AA, DD, MM):
Dominant Worldview and Other Worldview Content/Elements:
Very strong immoral, slightly mixed pagan, feminist worldview with strong politically correct elements, and strong homosexual references where teenage girls just do whatever they want and get involved with weird situations, the “Times Up” movement is mentioned, girl believes she has the right to murder her baby, compassionate Christians are seen as crazy, pro-life rescuers are seen outside an abortion clinic, homosexual elements as girl comes out to her friend and has a kissing scene with another girl, with some Christian moral elements such as a photo of the Pope is seen, cross is seen, prayer depicted, friendship extolled, motherly love depicted, billboards about marriage being between a man and a woman is shown, the father of a girl’s unborn baby wants her to have the baby and proposes to her when he finds out about their situation but at the end shows up at the clinic to support her and her evil decision
Foul Language:
18 obscenities, 12 profanities (mostly OMGs, one GD), light name calling, vomiting, an obscene gesture, girl seen urinating on a pregnancy test in a bathroom stall, and a prudish character that makes lots of crude jokes
Violence:
Teenage girl seen getting murdering her baby, a gun is used to threaten, a knife is seen, and a taser is seen and used
Sex:
It’s implied two teenagers are fornicating in a car (nothing is seen but it’s heard) and two teenage girls kiss after one announces she’s a lesbian
Nudity:
No nudity but images of female midriff
Alcohol Use:
Underage drinking seen and not rebuked
Smoking and/or Drug Use and Abuse:
No tobacco smoking but there’s conversation about smoking a marijuana cigarette; and,
Miscellaneous Immorality:
Strong miscellaneous immorality includes dysfunctional mother/daughter and father/daughter relationship with one of the characters, kidnapping, stealing, stalking, divorce discussed, and blackmail.

UNPREGNANT is a comedy streaming on HBO Max 17-year-old girl and her estranged best friend as they road trip to Albuquerque, New Mexico so she can get an abortion without her parents knowing.

Streaming on HBO Max, the movie opens with 17-year-old Veronica using a pregnancy test in a school bathroom in Missouri. Veronica tries to recount the night she could’ve gotten pregnant, but she’s sure her boyfriend, Kevin, used a condom. Either way, she anxiously prepares herself for the two-minute wait to find out if she’s pregnant.

When Veronica hears someone walk in the bathroom, she accidently drops the pregnancy test on the floor outside the stall, and a girl picks it up. Veronica realizes the girl in the bathroom is her estranged best friend, Bailey, and tries to not say anything while Bailey talks to her. When Veronica says Bailey can leave, Bailey realizes it’s Veronica in the stall and jumps to see over the top, which makes Veronica come out of the stall.

When Veronica gets the test back from Bailey, it reveals that she’s pregnant. Veronica and Bailey talk about it for a second. However, when another girl enters, Bailey stuffs the test into her pocket and walks out of the bathroom.

Veronica and Bailey meet up after lunch as Veronica wants her test back, but Bailey had already thrown it out in the dumpster out back. However, at the end of the school day, the recycling club finds the test, and everyone at school now knows someone is with child.

Cut to Veronica’s house. Being pregnant is upsetting Veornica’s plans to attend an Ivy League college in the fall. So, she calls a local abortion clinic to see if she can get the procedure done without her parents’ consent. The clinic tells her she can’t in Missouri, and the closest clinic that performs abortions without parental consent is in Albuquerque, New Mexico. Veronica makes the perfect plan to get there in a weekend and back without her parents knowing. She goes to see some other friends to let them in on her plan.

When Veronica arrives, though, her friends are in stalking mode to find out who’s pregnant, while also judging the unknown mother. Veronica decides not to tell them, and instead texts Kevin to make plans to tell him. When Veronica tells Kevin, he proposes marriage to her so she can keep the baby, but Veronica isn’t sure.

It’s now late, and Veronica heads to Bailey’s house. Veronica tells Bailey what’s happening and enlists her to go to New Mexico with her to kill her baby. Bailey agrees, and the two start the long journey from Missouri to New Mexico, not knowing what the trip will bring them.

UNPREGNANT has its comical moments, but eventually the situations in which the girls find themselves get so outrageous and unbelievable that most viewers will wonder what the blazes they’re watching. Both Haley Lu Richardson and Barbie Ferreira do great jobs in their roles, but it’s not enough to bring the movie together. Furthermore, the process of Richardson’s character getting an abortion is made to seem like a glamorous experience, which isn’t exactly how it goes.

UNPREGNANT has a strong immoral pagan, feminist worldview with some homosexual content. The movie also has strong Anti-Christian, politically correct elements. Though Veronica’s mother is Christian and is upset her daughter killed her baby without her consent, getting an abortion is glorified by Veronica and her friend. Also, even though the father of Veronica’s baby wants her to keep the child and proposes to marry her, he ends up showing up at the baby killing clinic to “support” Veronica. Finally, the movie depicts pro-life Christians as crazy. UNPREGNANT is part of an abhorrent new effort in Hollywood to promote murdering babies and attack the compassionate.