A LOVE SONG FOR BOBBY LONG

"Down and Out Country Ballad" 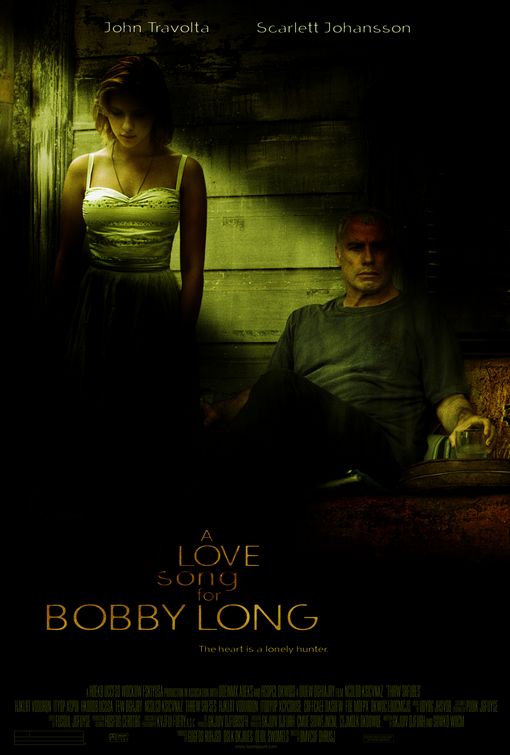 A LOVE SONG FOR BOBBY LONG stars John Travolta as the title character, a very sinful music professor. Traveling from Florida to New Orleans, Pursey arrives at the run-down house of her recently deceased mother, where Bobby Long and his young student protégé Lawson Pines live in abject filth. Bobby tells Pursey that her mother willed the home to the three of them, but Pursey missed the funeral. Pursey decides to stay, but Bobby tries to drive her off. Her strength of character and common sense eventually work wonders in this forgotten neighborhood of jazz musicians and fallen professors like Bobby Long.

There is a line in BOBBY LONG that sums up the movie: Bobby found “the shortest distance to heaven was through hell.” The movie would have been more meaningful if taught the truth, that the shortest distance to heaven is through Jesus Christ. The movie moves inexorably toward disaster but is redeemed in a pro-family, pro-Christian way. The worst part is the heavy sexual discussion and constant foul language, especially use of the “f” word. Still, the movie has strong, overt Christian content and is a brilliant character study with a redemptive message.

There is a voice over line in A LOVE SONG FOR BOBBY LONG which sums up the movie: Bobby Long found “the shortest distance to heaven was through hell.” The movie would have been more meaningful if he had found out the truth, that the shortest distance to heaven is through Jesus Christ. That said, the movie is bracketed by Gospel songs, discussions of “God and I are friends,” and other overt Christian content.

The movie opens with Bobby Long, played by John Travolta, limping out of a bar to go to the funeral of Lorraine Will. Lorraine was a beloved jazz singer with a lot of men in her life.

Traveling from Florida to New Orleans, Pursey eventually reaches the run-down house of her mother, where Bobby Long and his aging student protégé Lawson Pines live in abject filth. Bobby tells Pursey that her mother willed the home to the three of them and that Pursey missed the funeral. She decides to stay, but Bobby tries to drive her off so he can stay in the ramshackle house. Her strength of character and common sense eventually start to work wonders in the neighborhood of down-and-out, forgotten people made up of jazz musicians and fallen professors like Bobby Long.

The movie moves inexorably towards disaster but is redeemed eventually in a pro-family, pro-Christian way. The worst part of the movie is the constant foul language, especially the use of the “f” word. One long speech by Bobby to drive off Pursey involves repeatedly using a slang word for a woman’s private parts, which is totally disgusting. Behind the anger, the tensions, and the fighting is the fact that all the characters are made in the image of God and a recognition by even Bobby that God and he are friends. Eventually, God redeems him even though he had abandoned God. Each character has a powerful story, and the movie is like a prolonged country song with a Flannery O’Connor purgatory twist.

After a shaky beginning with some showboating by John Travolta, the movie settles into some brilliant character studies with a wonderful message. The problem is, though, that you don’t need to go through hell to get to heaven. You need to go through Jesus Christ. Thus, the movie wallows in its down-and-out jazz sordidness, captivating and repulsive at the same time.

This movie could have done without the foul language and been much more powerful. It’s clear that the writer is pro-Christian, with his positive messages of being born again, of faith, of relationships with God, but he seems to be stooping to conquer in his vulgar, naked portrayal of the sinfulness of man.

Writer: Shainee Gabel BASED ON THE NOVEL OFF MAGAZINE STREET BY: Ronald Everett Capps