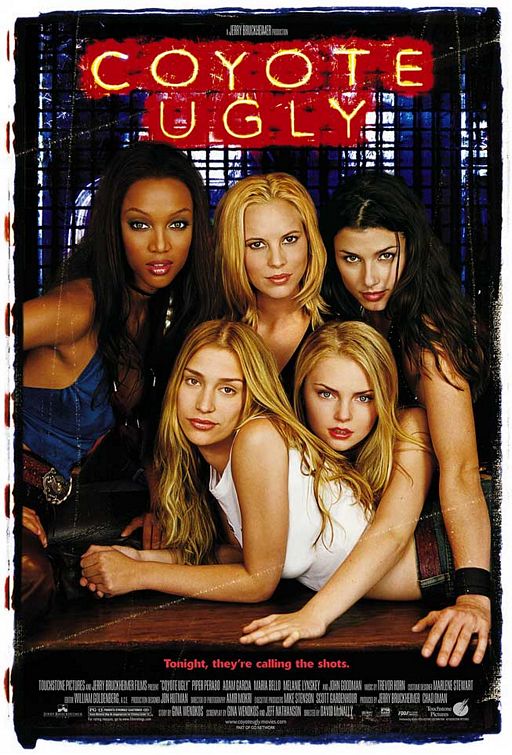 COYOTE UGLY depicts a girl’s struggle to make it as a songwriter in New York City. The girl, Violet, immediately meets Kevin, a cook she mistakes for a club manager. Despite their shaky beginnings, the two develop a relationship. She also finds a job at a bar, named Coyote Ugly, a wild place that pays well. Though she has the opportunity to sing at the bar, her involvement there could hurt her relationship with Kevin.

COYOTE UGLY is a well-written movie that is played out decently despite its lack of big name cast members. Piper Perabo is believable in her portrayal of Violet, a girl willing to do what it takes to accomplish her dreams. Adam Garcia does a fantastic job as the charming Kevin, while John Goodman, though varying little from other roles he has done, is amusing as Violet’s father. Regrettably, the sensuous dancing, one scene of implied fornication and the party atmosphere and alcohol use typical of bar movies mar this otherwise entertaining story. Although the foul language is kept minimal, there are some conversations dealing with sex. Ultimately, moral people should approach COYOTE UGLY with extreme caution, despite its positive elements

(PaPa, Ab, B, L, V, SS, NN, AA, M) Pagan worldview, with positive attitude toward premarital sex, where characters often exhibit non-Christian, party behavior such as women work as bartenders who use their bodies to get male customers to visit bar to party & one character says, “perfect choice for my first marriage” on her wedding day, plus some moral elements such as man helps young woman who has good relationship with her father; 6 mostly mild obscenities & 3 profanities; woman dumps bucket of ice on unruly man, man begins to hold on to girl, man punches man several times, man pushes man into jukebox, man shown in hospital after implied being hit by car & woman punches man; many non-graphic sexual situations such as girls dance sensuously at job & when trying on clothes, man takes shirt off when he is "auctioned" off for a date, girl undresses in front of man, implied fornication, girl says to friend, “We said we would be virgins until we were married, but that didn’t work,” woman describes every man as having “a two-year-old in his pants,” & girl says she only “played in the minors” in reference to lesbian experimentation; girl shows friends tattoo on upper thigh with part of underwear visible, girl strips down to underwear in front of man, partial male nudity with a well-placed sheet shown in bed after fornication, girl’s underwear visible under clothing, & many shots of cleavage & bare midrifts; alcohol use & some abuse; and, lying rebuked.

Piper Perabo stars as Violet Sanford in COYOTE UGLY, a movie depicting the life of a girl from New Jersey trying to make it big as a songwriter in New York City.

Violet’s last day at a pizzeria in Jersey signifies her readiness to go after her dream: to make it as a songwriter. Her dad, Bill (played by John Goodman of TV’s ROSEANNE), hates to see her go, but knows she takes after her strong-willed mother, who died five years ago. Bill gives her his blessing, so Violet, accompanied by her best friend Gloria (Melanie Lynskey of EVERAFTER), heads off to New York City.

Violet unpacks her stuff in her tiny, rundown apartment and heads out to the record companies to hand out her demo tape. Realizing that this method is getting her nowhere, she tries a club where new talent is exhibited nightly. She spots a guy who seems to know everyone in the place and asks the bartender who he is. He tells her he is the club’s manager, in charge of hiring new acts, though in reality, the bartender knows he is one of the cooks. Violet stops him and later discovers his name is Kevin, along with his true identity. Though she is upset with being duped, she realizes that there is a certain charm about Kevin, and the two begin to develop a relationship. She tells him that she has overwhelming stage fright, and he offers to help her overcome her fears so that her songs might be discovered.

When Violet’s apartment is robbed, she begins to look for a job. One night, while in a diner, she overhears some girls talking about their high tips and the coming departure of one of them. She asks the diner’s owner about them, and he gives her a matchbook with the name “Coyote Ugly” on it – the hottest bar in town. She goes to the bar and meets Lil (Maria Bello of TV’s ER), the owner. Lil is amused by Violet’s innocent appearance, but when Violet, who has been pushed far enough, shows some attitude, Lil gives her an “audition.” Violet eventually gets hired, even overcoming her stage fright to sing at the bar, though her involvement there may ruin her relationship with Kevin.

COYOTE UGLY is a well-written movie that is played out decently despite its lack of big name cast members. Piper Perabo is believable in her portrayal of Violet, a girl willing to do what it takes to accomplish her dreams. Adam Garcia does a fantastic job as the charming Kevin who cares for Violet, while John Goodman, though varying little from other roles he has done, is amusing as Violet’s father.

Regrettably, lots of sensuous dancing, along with alcohol use and a wild party atmosphere typical of bar movies, mar this otherwise entertaining story. There is also one scene of implied fornication between the main characters, and, though the foul language is kept minimal, there is some conversation dealing with sex.

Thus, the problem with COYOTE UGLY is not necessarily the graphic nature of the sexual content, or the nudity, but the amount of it and the pagan worldview underlying both it and the bar scene that the story depicts. This pagan worldview is accompanied by a positive attitude toward premarital sex among young adults. All of these things may be very attractive to older teenagers and lead them down the wrong road. Ultimately, parents should approach COYOTE UGLY with extreme caution, despite its positive depiction of a close father-daughter relationship. Furthermore, although Kevin and Violet have decent qualities about their characters, truly decent men and women would be a lot more careful about getting involved in such sexual situations as portrayed here. Of course, Jesus Christ is always ready to protect us from the temptations that life in the big city has to offer.