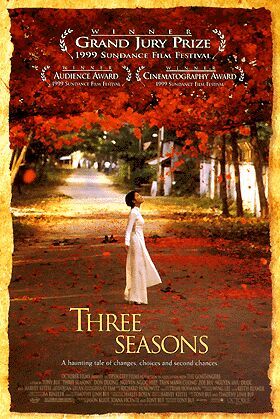 Beautifully told and extremely moral, THREE SEASONS won the Audience Award, the award for Best Cinematography and the Grand Jury Prize at the 1999 Sundance Film Festival. Written and directed by a 26-year-old, it is the first American full-length feature movie to be completed in the Socialist Republic of Vietnam since the war. Every tale in this slow-moving, but beautiful movie has Christian and moral virtue laden within it even as it deals with adult themes.

Strong moral worldview with many Christian practices of caring for the terminally ill, unconditional love & family restoration; 7 mostly mild obscenities; no violence but man scrapes woman's back with spoon until marked in a strange but supposedly benevolent ritual; no depicted sex but implied prostitution; no nudity but some clingy clothing on prostitute; alcohol use & child drinks alcohol; smoking; and, stealing & man urinates.

Beautifully told and extremely moral, THREE SEASONS won the Audience Award, the award for Best Cinematography and the Grand Jury Prize at the 1999 Sundance Film Festival. Written and directed by a 26-year-old, it is the first American full-length feature movie to be completed in the Socialist Republic of Vietnam since the war.

Although it does not have a looping narrative, THREE SEASONS weaves together three separate stories. We first meet a young woman, Kien An (Ngoc Hiep Nguyen), hired to pick and sell lotuses for a reclusive master. In the morning, women sing traditional songs on the watery field and then sell them from baskets in the city. One day, Kien sings a strange song that none of the women know. She is shushed by an elderly woman, but in the evening, her master, Teacher Dao (Manh Cuong Tran), who lives in a dilapidated temple in the center of the lotus field, asks to speak with her. Kien thinks she is in trouble, but Teacher Dao merely wants her to sing the song again. Kien discovers that Teacher Dao is an invalid, the victim of leprosy. He hasn’t emerged from his home in years. Kien learns that the master is a former poet, and she volunteers to be his hands and write down his poetry while he dictates it.

The second story involves a rickshaw, or cyclo, driver named Huy (Phat Trieu Hoang). Huy is poor and knows that the Americans who visit Saigon are in a completely different financial league than he is. One day, Huy sees a beautiful prostitute, Lan (Zoe Bui), coming out of a hotel after servicing a client. Huy gives her a ride home and soon makes a point of being there when she is done with future clients. Lan becomes a little uncomfortable at Huy’s frequent appearances. One day, Huy gives her $50 after winning a cyclo race. She thinks he wants to spend the night with her. She learns, however, that he merely wants her to get a good night’s sleep in a fine hotel room. He further demonstrates love, patience and unconditional love to her, resulting in her becoming a new woman, free from her past.

The final story features a small merchant boy named Woody (Huu Duoc Nguyen) who has his case of wares stolen. Woody thinks an American named James Hager (Harvey Keitel) stole it. Woody and James met in a bar a few days earlier. After Woody had a beer and fell asleep, he awoke to find his case gone. Woody searches for James, but James is on his own search, for the daughter he fathered during the Vietnam War. Ultimately, both Woody and James find what they are seeking and receive an unexpected blessing.

Every tale in this slow-moving, but beautiful movie is laden with Christian and moral virtue. Kien reaches out to her outcast and ill employer and grants him a service free of charge – the gift of creativity, writing his poetry down when he can not. James seeks reconciliation and restoration with his estranged daughter and does everything he can to facilitate it, including gifts of flowers and patience. The Bible tale of Hosea taking a prostitute for a wife is adapted in Huy’s story. Of course, he is attracted to Lan, but instead of approaching her like a customer, he quietly serves her by taking her home every night and giving her a gift she has always wanted: a night to sleep on a large hotel bed. Finally, he tells her, “You don’t have to pretend anymore” and marries her.

This movie is quiet and doesn’t have a strong plot, but it does feature fine performances of slice-of-life scenes which portray Vietnam and Saigon not as the home of violence and terror, but as the home of little acts of kindness, grace and beauty. The movie is not pro-communism; it doesn’t even mention any political structures. It does portray poverty, however, and the lengths that people will go to overcome it. Primarily, it shows the triumph of the human spirit over poverty. For that, and its fine Christian allegories, it is highly commendable.