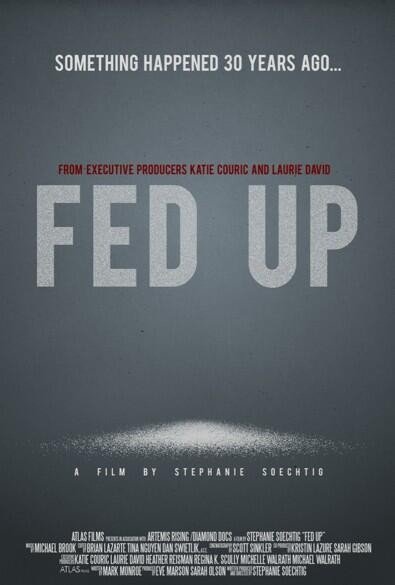 TV celebrity Katie Couric narrates FED UP, a biased documentary about sugar and childhood obesity. Doctors and writers give expert testimony explaining how sugar, in its many forms, is hidden in many popular foods, thereby exacerbating the battle of the bulge in America. Government, schools and private industry are all indicted for helping to contribute to the problem, creating a huge increase in obesity and even Type 2 diabetes among children. It urges families, business, government, and schools to work together to decrease the amount of sugar in America’s food.

FED UP is a popular offering in a long line of recent food-related documentaries. The movie attacks the food industry for adding sugar to many foods. It dispels the idea people can fight obesity on sheer willpower alone. However, FED UP is rather one-sided and urges more government regulations, even though it clearly shows at one point that new regulations in the 1970s led the food industry to add more sugar in its products in the first place! Caution, therefore, is advised when it comes to accepting everything in FED UP as gospel.

(PaPa, B, SoSo, PCPC, Acap, N, DD, MM) Strong mixed pagan worldview about the dangers of too much sugar in American food products (not only soda and candy but also in processed fruit juice, processed packaged food and fast food) that shows a concern about the negative effects of sugar and food industry ads promoting foods with sugar in them can have on children at even the youngest ages, but movie offers big government socialism as an answer even though it shows that government regulations against fat partly created an obesity problem because the food industry then put added sugar in foods to replace the fat, plus some politically correct attitudes expressed against people (including a few Republicans and conservatives) concerned about the “Nanny State” and against capitalism; no foul language; no violence; no sex; brief partial upper male nudity in doctor’s office and girls wear one-piece swimsuits at pool while exercising; no alcohol; some smoking ads shown to compare sugar to cancer-causing cigarettes, plus sugar addiction is said to be worse than cocaine addiction; and, a strong one-sided presentation that contains no interviews with critics and people on the other side, or even less biased experts, though movie says some major food industry companies refused to be interviewed.

When you sit down to watch FED UP, a small word of warning: Enjoy your chips, candy, popcorn, and soda now since they might be the last junk food you’ll appreciate for awhile. Well, for maybe a day, because, let’s face it, the addictive nature of such foods can be pretty powerful.

That’s just what the makers of FED UP want viewers to believe. Sugar, especially, is the new tobacco, according to the movie. The white stuff is the culprit behind childhood obesity, the filmmakers claim. It’s passively positioned by government and private industry, lurking in so many convenience foods that you have to work very hard to “get off sugar.”

As the saying goes, it’s simple, but not easy. One mom in FED UP cries when choosing between having chocolate in her house or helping her obese son by getting rid of it.

Chocolate! That may seem like a no-brainer, but consider: In FED UP, cocaine-addicted laboratory rats chose sugar-water much more often than cocaine. “Food addiction,” states one doctor in the movie, “is a real thing. . . a biological fact.” Sweets (and processed foods containing sugars – including high-fructose corn syrup) can hold us in a vice grip to the point of obesity and other diseases, like diabetes, cancers, heart disease, and lipid disorders.

Nearly 32 percent of people in the U.S. were obese in 2011, as opposed to 11 percent in Sweden, the movie says. There were reportedly no cases of Type 2 Diabetes among adolescents in 1980, but 57,638 just 30 years later. Six-month old babies have been obese in America. So, what should we do?

Many have long believed that the overweight should just use self-control, but experts on FED UP disagree. “We’re blaming the willpower, the moral fortitude of these kids, and it’s a crime,” one expert says. FED UP’s nutrition advocates believe it is just as unethical to market sugary cereals to children as it was in years past to advertise cigarettes to kids. That’s right, Camels, Coke and Cocoa Crispies are put in the same boat.

FED UP is narrated by high-profile journalist turned activist Katie Couric and digs up a heaping portion of food-related political history from the past few decades. Critical coverage reveals possible concealments from the United Nation’s World Health Organization to the U.S. Department of Agriculture, which is designed to promote the food industry at the same time that it regulates it. There are even questions about First Lady Michelle Obama, whose “Let’s Move” campaign has become more about exercise and less about reforming a food industry that puts too much sugar in its products. Mrs. Obama declined to be interviewed, as did food industry spokesmen.

Along the way, FED UP profiles a few obese teenagers from around the country (grab the tissues). It shows teenagers and children at the dinner table, reaching for pizza in the school cafeteria line, and laboring to bike, walk or row away the extra pounds. Viewers also witness their tears, through poignant webcam diaries, as the teenagers give heartbreaking confessions of nearly insurmountable challenges to losing weight. One of them even undergoes gastric surgery, which includes the risk of death, at age 15.

FED UP presents a call to action for viewers to fast from sugar for 10 days and to leave behind processed foods. It urges enlisting parents, schools and government officials in the fight against sugar, processed foods and fast food and in favor of healthy eating.

FED UP has a couple glaring flaws.

First, it briefly mentions conservative and libertarian concerns about the “Nanny State,” specifically as it relates to New York City’s former mayor, Bloomberg, who tried to ban all big sodas from fast food establishments and convenience stores. It mocks such critics of Bloomberg’s plan, including Sean Hannity and Sarah Palin, but the filmmakers don’t even try to interview any conservatives or libertarians, much less any expert who might disagree with the movie’s total medical condemnation of sugar.

However, in its call for the federal government to treat added sugar the same way it treats tobacco, the movie makes its most glaring error. At one point, the movie notes that America’s obesity problem began in the late 1970s when federal regulations from Congress led the food industry to make more products with “reduced fat” or even no fat at all. The movie points out that eliminating the fat can make food taste bad, so, at the same time the food industry made more food products with less fat, it added more sugar, including high fructose corn syrup, to its food products so that they would still taste good. In other words, the big government “Nanny State” is the actual reason why the food industry now puts too much sugar in its products. So, it’s also the reason why more and more Americans, including young children and teenagers, have become overweight and obese!!! Thus, big government is the real problem, not necessarily the food industry. Of course, the movie then skips over this ironic revelation and starts calling for even more Nanny State regulations to get rid of so much sugar in our food, even to the point of forcing the food industry to stop advertising to young children. So, maybe Sean Hannity and Sarah Palin were right along: the federal government should have stayed out of the food regulation business in the first place! After all, America has had sugary soda pop and candy since the late 1800s, so soda and candy can’t possibly be a major culprit when it comes to America’s current alleged “obesity epidemic.”

That said, FED UP enlists enough facts about the possible dangers of sugar in so many of our food products that honest citizens probably should indeed be concerned. The evidence does seem to suggest that Americans need to eat more fruits and vegetables, and much less food products with added sugar, including processed foods.

So, media-wise viewers probably should remember: 1) That choosing healthy foods (and staying away from too much soda, candy, chips, and processed food) can be a way to love your family; and, 2) That government, including “public” schools, shouldn’t promote unhealthy foods with too much fat, sodium and sugar (as this movie suggests they’ve been doing). Changing eating habits and food-buying habits can be extremely difficult, but God can make a way out of temptation, and He is the Great Physician. Obesity can seem impossible to conquer, but miracles can and do occur through the power of Jesus Christ, Who can work through doctors and surgeons when needed. Finally, we can love those around us, especially our children and grandchildren, for the long-term by purchasing, preparing and cooking regular food instead of relying so much on convenient, highly processed substitutes.