"A Black Journey into the Depths of Greed" 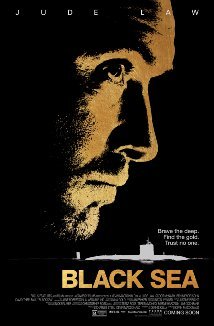 BLACK SEA is a claustrophobic thriller set in a submarine. A Navy veteran takes a crew into the depths of the North Sea to find a sunken World War II vessel filled with millions of dollars of gold. Since each man gets an equal share, some realize that the less men there are, the bigger their share will be. The crew faces the external dangers of navigating the bottom of the sea in a rusty sub and trying to avoid detection by the Russian navy. It’s every man for himself as each man becomes vulnerable to the murderous greed that takes over the mission.

The suspense and thrills are expertly executed in BLACK SEA, with a mixture of unpredictable characters and a menacing environment keeping viewers guessing until the last scene. However, there’s an excessive amount of obscene language and violence, plus some other inappropriate content littered throughout. There is also an anti-capitalist tone and plenty of immoral behavior. Despite this, greed and immorality are punished, and good is rewarded in the end. Ultimately, MOVIEGUIDE® advises extreme caution for BLACK SEA.

(B, C, Acap, LLL, VVV, S, NN, D, MMM) Light moral, redemptive worldview with elements of good versus evil, defense against bullying, reprimanding for immoral behavior or speech, good triumphs over evil, sacrificing oneself for others, but with some pagan behavior and an anti-capitalist element where there’s an abhorrence of working for the rich; some light smoking of cigarettes; over 80 uses of obscene words and profanities, mostly “f” and “s” words, multiple profane uses of the LORD’s name, with some scatological references and vomiting; some very strong, intense violence such as boy delivers news of a friend that committed suicide, bullying, man roughly pulls boy from top bunk, radio is destroyed by axe, lottery ticket is burned, man is stabbed in the heart with a knife, equipment in the engine room blows up, open bloody wounds, men completely burned and shown dead, dead bodies floating under water, skeletons chained inside old WWII sub, implied cannibalism, diver falls off cliff underwater and death is implied, man beaten to death with a wrench, men threatened with a gun, water fills submarine and there are implied drownings; some sexual content and references include discussion of fathering a baby outside of marriage, man accuses another of being a virgin and claims that a virgin is bad luck, boy denies he’s a virgin, and brief mentions of sex; brief depiction of a naked woman on a cross in a tattoo on a man’s back, upper male nudity while working in the hot submarine, upper male nudity in bathing suits, woman in a bikini on the beach; and, very strong miscellaneous immorality includes greed, murderous intentions, attempts to persuade others to murder, avoiding the authorities, disobeying orders, married couple arguing with implied separation, and one man refuses to save another’s life.

BLACK SEA is a suspenseful submarine thriller about Robinson, a Navy veteran who is fired after a long stint at a shipyard, and his quest to better his life for his family and rise from the ranks of the working class. Having a drink with some buddies after he’s fired, tales begin to spin about a World War II ship sent to Hitler from Stalin, carrying millions worth of gold bars to convince Hitler not to invade the USSR. The rumor is that a German U-Boat sunk it before it could reach its destination, so the gold is lying on the bottom of the Black Sea waiting for someone to claim it. Seeing it as his ticket to wealth, Robinson gets the idea to form a team of expert sailors and divers to retrieve the treasure.

After finding a financier, they acquire an old battle-weary submarine to take them into the murky depths. Robinson recruits a mixture of Russian and British experts, and the financier sends one of his white-collar American businessmen to accompany the crew. Seventeen-year-old Tobin becomes a sore spot for some of the experienced men as they believe the green boy will be a liability instead of a help. Robinson defends him since Tobin reminds him so much of the son he left behind.

As soon as the journey gets underway, things start to go wrong. Robinson promises each man gets an equal share of the gold, but several of the crew start to realize that the less men there are, the bigger their share will be. This sets off a suspenseful guessing game of who will kill whom. Trapped on a submarine trying to hide from the Russian fleet patrolling the waters above, there’s nowhere to go. The internal conflicts of the crew are compounded by the inherent danger of the mission. As Robinson gets more and more desperate to accomplish his goal, the lives of the entire crew are threatened.

While BLACK SEA caters to the predictable submarine scenarios, there is plenty that is unpredictable. Some characters clearly have moral standards that they refuse to abandon, while others will do anything for their own selfish gain. There is nothing more nerve-racking than having your life in danger from multiple angles all at once. The script does a good job taking advantage of the setting, and it leaves viewers guessing right up to the last scene of the film. The acting is top-notch, and the production design of the submarine interior and of the bottom of the dark, sinister sea does a great job adding to the overall suspense.

Sadly, the film is tainted with obscene language, so much so, that you expect a foul word to spill out every other sentence. Some other inappropriate content, sexual and scatological in nature, is speckled throughout. Violence is also extremely heavy with multiple murders and accidental deaths, some of which are mildly graphic. While everyone is out to get rich, the movie’s tone is anti-capitalist, and greed becomes the central force controlling the immoral actions of the crew. However, the movie seems to counteract its wrongdoings by not rewarding bad behavior and allowing good to triumph in the end. Ultimately, however, MOVIEGUIDE® advises extreme caution for the objectionable content in the R-rated movie BLACK SEA.