THE ONE AND ONLY IVAN 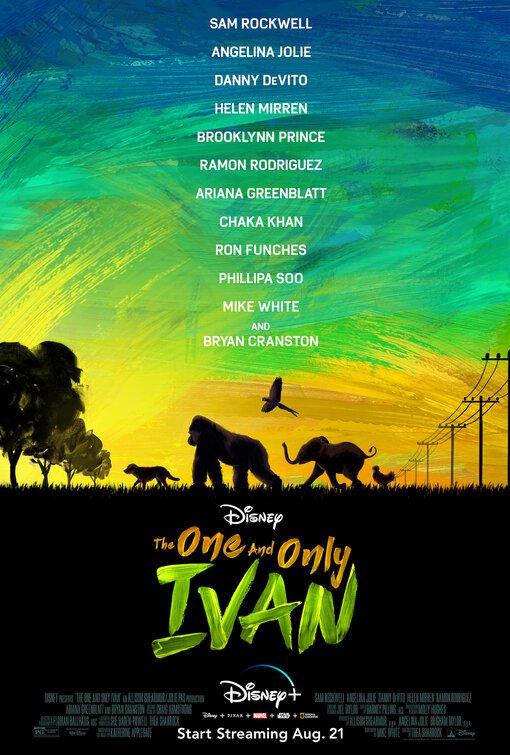 Based on a true story, THE ONE AND ONLY IVAN is a live-action movie on Disney Plus about a gorilla named Ivan who performs at a shopping mall but longs to be in the wild. The circus is in trouble financially. One day, the owner, Mack, purchases a baby elephant named Ruby that he hopes can save the show. Later, Ivan makes a promise to a dying elephant named Stella that he will help free Ruby. It turns out that Ivan also wants freedom.

THE ONE AND ONLY IVAN is sweet, engaging and winsome, with funny tropes dedicated to animals. The star-studded cast features Angelina Jolie, Danny DeVito, Helen Mirren, and Bryan Cranston as the circus owner. The movie has a mixed worldview. It contains some strong moral elements stressing freedom, kindness and sticking together, mixed with some strong environmentalist elements about letting animals roam free in the wild. There’s some allegorical Christian, biblical elements about mankind naming the animals and one instance where a character says to “take a leap of faith.” THE ONE AND ONLY IVAN has little objectionable content.

(Pa, BB, EE, Ro, C, V, M):
Dominant Worldview and Other Worldview Content/Elements:
Mixed worldview with strong moral elements where characters stick together and care for one another, some strong environmentalist elements as animals are meant to roam free in the wild rather than be in captivity or made to perform as entertainers, some light Romantic elements where animal characters dream about a future where they will get to live like the rest of their species free from the confines of walls, and some allegorical Christian imagery stressing the value of mankind naming animals and one instance where a character says to “take a leap of faith”
Foul Language:
No obscenities, no profanities, two “what the hecks,” and gorilla character passes gas once
Violence:
Light violence when car almost runs over a bunny, gorilla beats his chest in frustration in a few scenes and an old elephant dies
Sex:
No sex
Nudity:
No nudity aside from naturalistic animal nudity
Alcohol Use:
No alcohol use
Smoking and/or Drug Use and Abuse:
No smoking or drugs; and,
Miscellaneous Immorality:
Lying and an ambiguous element where animal characters look up to the sky after one of their number passes away, as if she is looking down on them.

The movie begins by telling viewers about Ivan, a silverback gorilla who lives in Washington State and performs a circus act at a shopping mall alongside a circus ringleader named Mack. Ivan serves as the headliner for all the animals in Mack’s show, but the show’s in financial trouble.

Julia, the daughter of one of the stagehands, gives Ivan some of her old crayons after she gets new ones. Shockingly, Ivan seems to be somewhat of an artist and draws a beetle. However, viewers put that out of their minds for a bit when a new animal joins the act, a baby elephant named Ruby.

Ruby becomes pals with an older and wiser elephant named Stella. Ruby, like most children, is inquisitive but altogether lovable. Stella serves as a mother-figure to Ruby, but her health is diminishing since she’s so old. Right before Stella passes away, she asks Ivan to help get Ruby to freedom in the wild, and Ivan promises Stella to do just that.

Bob, a stray dog who’s befriended Ivan, has a pessimistic view of humans, but that’s not the general consensus of all the animals in the show. Before her death, Stella made sure to stress that not all humans are bad, and they’re capable of redemption in how they treat others. Still, Ivan knows that he and the others aren’t made to be in their cages, and he hatches a plan to escape with his furry friends in tow.

One night, Ivan successfully tricks the security guard, and the animals break free! However, they don’t make it very far until Mack finds them in the trees across from the mall parking lot. Mack convinces Ivan, who’s obviously in charge of the operation, to return to safety, and Ivan obliges. It seems that all hope for freedom is lost until Ivan uses his artistic abilities to get the attention of the press and the public that the wild is where he and his friends truly belong.

THE ONE AND ONLY IVAN is winsome and engaging, mainly due to the sweetness of the story’s animal tropes. The movie functions similarly to LADY AND THE TRAMP (2019) or DUMBO (2019) in terms of the CGI animals, but that won’t deter viewers at all. It’s also based on a true story, which is revealed during the end credits. The star-studded, talented cast features people like Angelina Jolie, Danny DeVito, Helen Mirren, Sam Rockwell, and Bryan Cranston as the circus owner, Mack. Cranston plays Mack to perfection. It’s refreshing to see him in a family-friendly role rather than his usual adult roles like BREAKING BAD and TRUMBO, which contain vast amounts of excessive content.

THE ONE AND ONLY IVAN has a mixed worldview. It contains some strong moral elements stressing freedom, kindness, treating others well, and sticking together, mixed with some strong environmentalist elements about letting animals roam free in the wild. There’s also some light Romantic elements about living without walls and allegorical Christian elements stressing the value of mankind naming animals, and one instance where a character says to “take a leap of faith.” THE ONE AND ONLY IVAN has little objectionable content, with only some brief potty humor and light jeopardy.

Watch THE ONE AND ONLY IVAN: