PHINEAS AND FERB THE MOVIE: CANDACE AGAINST THE UNIVERSE 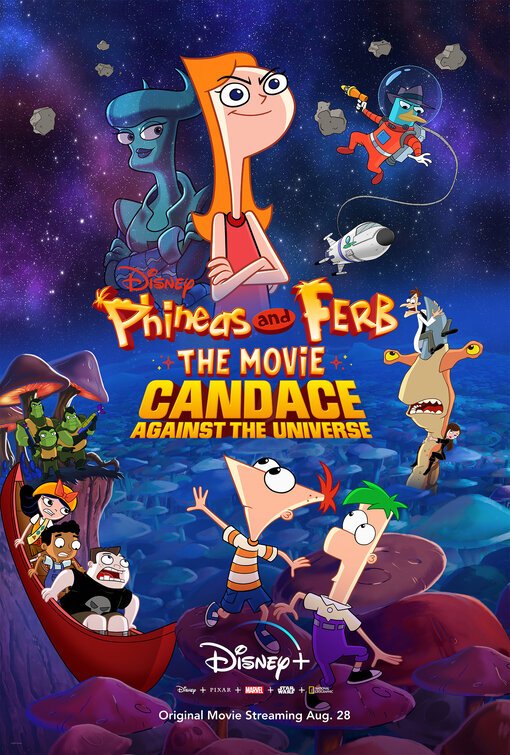 PHINEAS AND FERB THE MOVIE:  CANDACE AGAINST THE UNIVERSE is an animated comedy on Disney Plus. It opens with Candace blaming her younger brothers, Phineas and Ferb, for her lousy summer. Vanessa, the daughter of Dr. Doofenshmirtz, notices Candace while Vanessa’s driving her scooter. She tries to help Candace talk through her feelings. Suddenly, Candace sees a large metal object. Believing it’s one of Phineas and Ferb’s annoying inventions, Candace starts hitting it. However, it’s really an alien spaceship that abducts the girls into space. Phineas and Ferb, their friends, and Vanessa’s father follow Candace and Vanessa to rescue them to a faraway planet.

PHINEAS AND FERB THE MOVIE:  CANDACE AGAINST THE UNIVERSE is a funny, clever animated comedy. It’s filled with delightful songs and playful musical interludes that keep things lively. The movie also has a strong moral worldview promoting family, friendship, repentance, love, and forgiveness. In the beginning, Candace believes the universe is against her, but she finds out that things will work out if she and her brothers stick together. CANDACE AGAINST THE UNIVERSE has a great ending that’s both sweet and funny.

(BB, C, ACAC, FR, Ro, P, V, M):
Dominant Worldview and Other Worldview Content/Elements:
Strong moral worldview with some redemptive elements extols family teamwork, friendship, courage, love, forgiveness, and brotherly/sisterly love, and the good guys must stop an alien invasion of Earth by a tyrant who wants to mind-control human beings, and a girl’s desire for revenge against her younger brothers has bad consequences but leads to eventual repentance and forgiveness, plus a couple jokey references to astrology (mad scientist reads his horoscope in one scene, and girl’s song has a line about the stars aligning for her on a beautiful morning), there are a few scenes stressing false Romantic notions of self-esteem, and the good guys carry an American flag in one brief scene
Foul Language:
No obscenities or profanities, but one character says “heck”, and a character calls himself stupid
Violence:
Cartoonish, comical violence with science-fiction style shooting with lasers, laser canon destroys some battle robots made by the youthful good guys, pet platypus dons a spacesuit to stop asteroids from hitting a spaceship, and the asteroids sometimes knock him about as he breaks apart some of the asteroids, alien jailer falls under treadmill, and the treadmill spits him out, sentient platypus fights some aliens and throws them in water, a monster then swallows the aliens, but comically slow, slapstick accidents involve mad scientist falling off cliffs or tripping, the upper torso of aliens explodes when they’re intensely happy and makes the noise “candace”, but the bodies grow back eventually, and one image shows police herding the bottom half of aliens’ bodice into a police van, characters are thrown out of a spaceship and have to figure out a way to save themselves as they fall to Earth, children attach a canoe to a large truck, and they drive around a baseball stadium to make the canoe knock over evil aliens, large scary dragon birds, some characters are mind-controlled by the spores of a large plant called “Mama,” some science fiction creatures with teeth,
Sex:
No sex
Nudity:
No nudity
Alcohol Use:
No alcohol use
Smoking and/or Drug Use and Abuse:
No smoking or drugs;
Miscellaneous Immorality:
Children lie to protect one another from their mom, some adults are seen as less intelligent than the children, a girl believes the universe is against her, and an alien leader tricks girl by stroking her ego.

PHINEAS AND FERB THE MOVIE: CANDACE AGAINST THE UNIVERSE is an animated TV comedy on Disney+ based on the popular Disney Channel series PHINEAS AND FERB.

The movie opens with Candace, Phineas and Ferb’s older sister, riding a bike and singing a song about how the day is so beautiful. However, Candace keeps getting distracted by Phineas and Ferb’s antics. She can’t help but blame her brothers for ruining not only a beautiful day, but her whole entire summer.

After she sees a giant mechanical clown juggling Phineas and Ferb and their friends, she believes this will finally be the moment she can call her mom and catch them in the act. However, the mad scientist Dr. Doofenshmirtz accidentally turns the machine to lint, erasing the evidence of the boy’s invention as well as any chance of her mother believing Candace.

While driving by, Vanessa, the daughter of Dr. Doofenshmirtz, notices that Candace is upset. She stops to try to help Candace talk through her feelings. Candace notices a large metal object in the front lawn. Believing it’s another one of Phineas and Ferb’s inventions, Candace starts hitting it, but it turns out to be an alien spaceship, and both Vanessa and Candace are abducted by the aliens.

In a desperate attempt to escape, Candace and Vanessa launch all the escape pods in the ship, but only Vanessa is able to get into one. Candace is taken to an alien city on the planet named Feebla-Oot, and Vanessa ends up there too. Candace meets the city’s queen, Super Super Big Doctor. Candace is told she’s “the Chosen One,” and Candace is just happy that someone has finally acknowledged that she’s special. Things are not what they seem, however.

Meanwhile, Phineas and Ferb saw the spaceship kidnap Candace and Vanessa. Ferb manages to take a photo of Candace through the ship’s window. They notice a license plate inside the spaceship. With help from their friends, they build a portal to the planet of Feebla-Oot, but end up at Dr. Doofenshmirtz’s evil lair, where he’s built a spaceship to save his daughter. They fly the Doctor’s spaceship to find Vanessa and rescue Candace, who may not want to leave the utopia that’s free of her annoying little brothers. Phineas and Ferb’s pet platypus, Perry, who’s actually an undercover secret agent keeping tabs on the mad scientist, sneaks onto the spaceship to protect his caretakers. The adventure to rescue the girls turns out to be more dangerous than they imagined.

PHINEAS AND FERB THE MOVIE: CANDACE AGAINST THE UNIVERSE is a funny, clever, first-rate animated comedy. It’s filled with delightful songs and comical musical interludes that keep things lively and playful. For example, in one funny scene, Phineas and Ferb lead a group of good aliens against the bad aliens and sing a silly song to fake out the bad aliens. The movie has a strong moral worldview promoting family, teamwork, friendship, courage, repentance, love, and forgiveness. There are a couple comical references to astrology and a couple scenes stressing Romantic notions of self-esteem. Eventually, however, Candace reconciles with her brothers. In the beginning of the story, Candace believes the universe is against her, but she finds out later that things will work out if she and her brothers stick together. CANDACE AGAINST THE UNIVERSE has a great ending that’s both sweet and funny.

Watch PHINEAS AND FERB THE MOVIE: CANDACE AGAINST THE UNIVERSE: