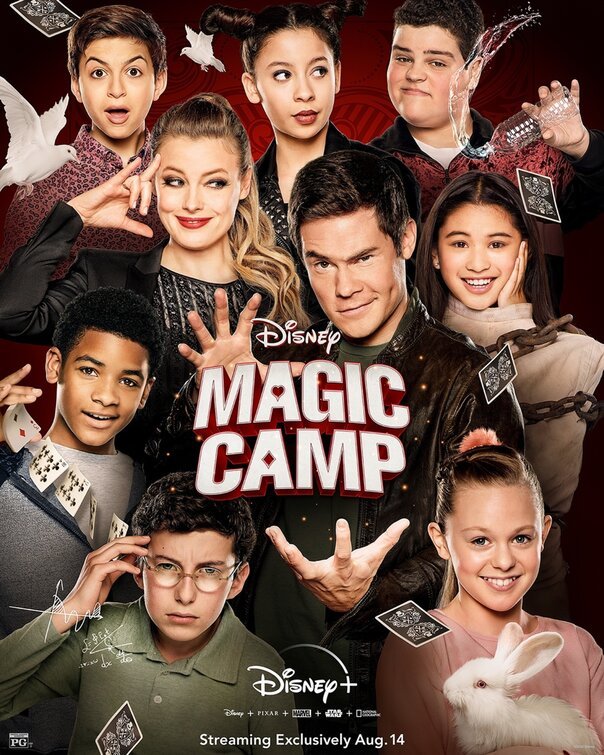 MAGIC CAMP follows Andy, a washed-up stage magician who’s recruited to be a counselor at the Institute of Magic, where he learned all his skills as a child. Theo, the young boy who is the focus of the movie, just lost his father and heads to the Institute of Magic looking to somehow connect with his dad again because card tricks are something they did together. Along the way, both Andy and Theo help each other in many ways when they didn’t even know they needed the other.

An original Disney Plus movie, MAGIC CAMP is heartwarming, funny, positive, and family-friendly. The movie hits the right notes, with some great themes that capture the viewer’s heart, but it could use more comedy. MAGIC CAMP has a strong moral worldview encouraging people to find their talent and be confident when using it. The movie shows loving parents who turn up to support their children, friends who stick by one another and scenes of reconciliation. However, there’s some unnecessary potty humor in MAGIC CAMP and some basic stage magic that relies on tricking an audience.

(BB, C, L, V, M):
Dominant Worldview and Other Worldview Content/Elements:
Strong moral, light redemptive worldview as a camp counselor strives uncover each of his campers unique talents to help them be the best they can be, counselor teaches children to have confidence in their talents, movie extols having loving and supportive parents, friendship and reconciliation are exalted, man learns that helping others is sometimes better and more rewarding then money and fame, and elements of respecting elders because they have wisdom younger people don’t
Foul Language:
No obscenities, one OMG profanity, some light name calling, a comment about a child having to pee a lot at night, birds are called poop machines, bird poops on guy’s shirt, comment about passing gas, child seen picking their nose, and a skunk sprays a group of children
Violence:
Light violence (mostly comical) includes girl caught in hidden net, and when she lets herself out, she drops to the ground, fire trick seen, guy accidently pushes young children over but goes and helps them up, one cabin has a “magic fight” with silly string and power color balls where cereal and milk are dropped on kids
Sex:
One kiss between pre-teenage children
Nudity:
No nudity
Alcohol Use:
No alcohol
Smoking and/or Drug Use and Abuse:
No smoking or drugs; and,
Miscellaneous Immorality:
Lying but character ends up telling the truth, stage magic depends on tricking or fooling people, and a cheating incident, but it ends up being a miscommunication error between two people, and one person really didn’t cheat.

A Disney+ original movie, MAGIC CAMP follows a failed stage magician who returns to the stage magic camp he attended as a child to be a camp counselor and help mold young magicians. MAGIC CAMP is heartwarming, funny and family-friendly, with great positive, uplifting themes, but it falls a tad short in the comedy department and contains some toilet humor.

The movie opens with a young boy, Theo, doing magic tricks with cards in his room. Theo is kind of down because his dad just passed away, and he seems lost without him.

Theo’s mom enters his room because she said he received mail from the Institute of Magic. Theo is confused, as he never applied to the Institute. However, his mom is super excited because the video message informs them that Theo was admitted to the Institute, which she calls magic camp.

At first, Theo doesn’t want to go because he would rather spend the summer helping his mom around the house, but she insists that he goes because it’s what his father would’ve wanted. So, Theo agrees to go.

Cut to the Vegas strip. A washed-up magician, Andy is a taxi driver barely making ends meet. All his customers talk about this amazing magician, Christian Darkwood, which annoys Andy because there seems to be bad blood between them. Suddenly, when Andy gets back into his taxi after dropping a customer off, Preston, the camp director of the Institute of Magic, shows up in the backseat. Preston said he needs another counselor at the camp, and that he wants Andy to join because he attended the camp in the past. Andy is skeptical at first, but decides to go.

All the children and counselors begin to arrive at the Institute of Magic. As Andy gets out of his car, he’s shocked to see all the young people running toward him. This makes Andy happy that they know his legacy at the camp. However, Andy soon realizes all the kids are flocking to someone else, Darkwood. Andy is upset and annoyed that his arch-nemesis is a counselor at the camp, but he has no choice but to stay.

The campers are split into four different cabins, the spades, clubs, diamonds, and hearts. Andy gets the hearts and quickly learns that he somehow ended up with all the first-time campers, including Theo, while Darkwood got all the campers who’ve been to camp before.

As Andy learns the best way to teach these campers basic magic, he ends up learning a lot about himself along the way as well.

MAGIC CAMP is a heartwarming, funny, positive, and emotional family-friendly movie on Disney+. Adam Devine brings the star power to this streaming TV movie with some young, fairly unknown supporting actors who all play their specific roles well. The movie hits all the right notes, with some great themes that capture the viewer’s heart, but it could use more comedy.

MAGIC CAMP has a strong moral worldview showing that each person has a unique talent to offer and that people should be confident when using their talent. It also shows loving parents who turn up to support their children, friends who stick by one another and scenes of reconciliation. However, there’s some unnecessary potty humor in MAGIC CAMP and some basic stage magic that relies on tricking an audience. MOVIEGUIDE® advises caution for younger children.