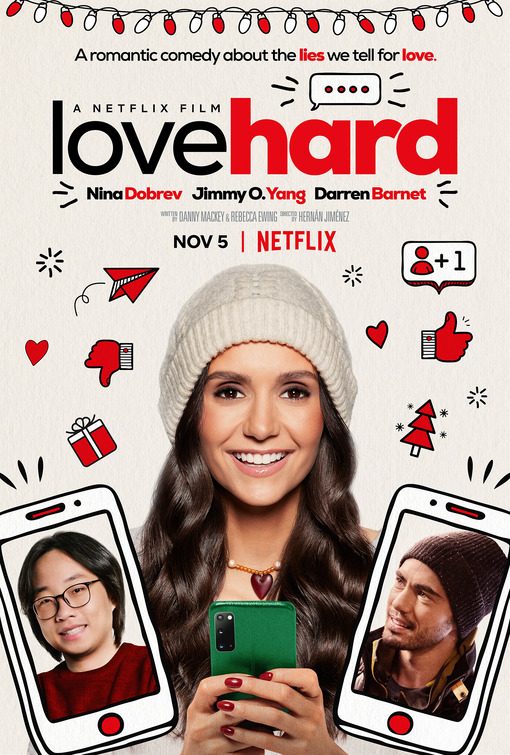 LOVE HARD is a romantic comedy on Netflix. Natalie is a Los Angeles journalist who turns her dating experiences into stories for her readers. These days, though, she’s just looking to find her perfect match. One day, in an online dating app, she matches with a guy, Josh, who she thinks has long-term potential. She decides to fly to visit him in his home of Lake Placid, New York for Christmas. The only problem is, when she shows up, Josh isn’t who he said he was.

LOVE HARD has a mixed worldview with Romantic, moral, pro-family elements and other content. The plot centers on one’s desire for romance, but the characters learn to like people for who they are and coming together as a family. The movie also promotes honesty and seeking forgiveness, which ultimately wins out in the story. Since the movie’s set during Christmas, it has strong Christian elements. However, LOVE HARD is marred by lots of foul language, including some strong profanities, crude references to sex, and substance abuse. Also, there’s some politically correct content and two homosexual references.

(PaPa, RoRo, BB, CC, Cap, PCPC, Fe, FR, Ho, LLL, SS, N, AA, DD, M):
Dominant Worldview and Other Worldview Content/Elements:
Mixed pagan worldview with strong Romantic, moral, pro-family elements, pagan behavior and other content, plot centers on one’s desire to have a significant other, but along the way characters learn the value of liking someone for who they are, movie promotes coming together as a family and supporting one another, and movie extols the idea that love needs to be led with honesty, Christian elements include a moment when a character references someone’s age by saying a man could be as old as a waiter from the Last Supper, there’s a Nativity displayed in the front yard, one man says “I’m a Christian,” two “Thank Gods” are said in a fast dialogue moment, a man says “the Prodigal son has returned” which references the Gospel of Luke, and one character says something is a “sign form God,” but it’s kind of cavalier, there’s also a scene where characters sing Christmas carols, but one character makes it more of a show than about the reason for the season, and a woman wears a “Happy Birthday, Jesus” sweater, plus some pro-capitalist elements where as a man wants to start his own business, some politically correct content includes politically correct views of people who hunt, characters change the words to “Baby It’s Cold outside” to make the song more woke, and a feminist element as a woman holds a “Votes for Women” mug, movie opens with the mention of Greek Mythology’s idea of finding one’s “other half,” two references to someone’s astrological “birth sign” twice, and a quick mention of yoga, a man asks if Mormons are at the front door but asserts that his family isn’t converting, and a homosexual joke, and a man confesses he’s been with another man
Foul Language:
16 obscenities (including one “f” word), six Jesus profanities, four GD profanities, light profanities include 14 OMGs, five references to God, and one “For God’s Sakes,” plus a character uses a euphemism for MF, “mofos”
Violence:
Woman hits someone with a baby Jesus from a nativity scene even though he asks her not to do so, and a man recounts a story about his father falling off the roof
Sex:
Some light and strong sexual content and references includes a mention of TOP GUN being homoerotic, a man causally says he been with another man and doesn’t want to tell the HR department, woman recalls that someone she dated was great in bed, woman tries to seduce a guy she likes at a bar by dancing seductively but it’s more comical than sultry, a woman asks her friend if she’s had an intense orgasm, two men at a bar talk about the size of their private parts, woman wears pajamas saying “I aint no ho ho ho,” character makes a joke the some investors “lost everything except their virginity,” Grandma says “the pen is mightier than the p*nis,” and Grandma says she’s used a dating app and has seen “more ass than a church pew,” and references to “having sex”
Nudity:
Upper male nudity in a photo, woman takes a bath, but she’s covered, and in another scene she’s in her underwear, and discussions about photos of men’s private parts
Alcohol Use:
Occasional wine drinking, and characters play a drinking game in a montage while watching a movie, scene in a bar with some drunkenness and liquid courage, and a woman puts alcohol in a mug as her AA sponsor calls
Smoking and/or Drug Use and Abuse:
Character references smoking something in high school, and woman smokes a joint to take the edge off during a date and then gets high; and,
Miscellaneous Immorality:
Lying, some animosity between brothers, woman says “God hates her,” and a character makes a joking comment about cousins getting married, even though they aren’t cousins, and they aren’t getting married.

LOVE HARD is a romantic comedy on Netflix about a female writer fooled by a short Asian guy on an online dating app who promises to set her up with the handsome guy in the photo he used on his profile. Set during Christmas, LOVE HARD is funny and engaging, with good comic performances and positive pro-family messages and positive Christian references, but it’s marred by an excessive combination of foul language, crude references, brief substance abuse, and other negative content.

Natalie is a Los Angeles journalist who’s made a living out of turning her dating experiences into stories for her readers. These days, though, she’s just looking to find her perfect match.

One day, while on an online dating app, Natalie matches with a guy, Josh, who she thinks has long-term potential. So, she decides to fly to visit him in his home of Lake Placid, NY for Christmas. The only problem is, Josh isn’t who he said he was online. The real Josh is a short Asian man.

After confronting Josh away from his loving family, Natalie goes to a local bar to drown her sorrows until she sees the real-life guy whose photo Josh used to catfish her with the dating app. Natalie takes a few shots of alcohol to impress this new guy, whose name is Tag, but she has an allergic reaction to the kiwi in the mix of her drink. Josh comes to the bar and winds up taking Natalie to a local vet who helps her swelling go down.

Natalie is still furious with Josh, but the pair strike up a deal where Josh will help Natalie date Tag, but only if she continues to pretend to be his girlfriend until they can stage a breakup that will convince his family they’re separating.

Things aren’t smooth sailing for them, however. Josh’s more accomplished older brother, Owen, comes to town and exacerbates old insecurities that Josh has. Also, Natalie and Josh tell Tag that Natalie is Josh’s cousin. This means they must be very careful about not mixing up the lies they’ve told Tag with the lies they’ve told Josh’s family.

Will everything pan out the way Natalie and Josh want it?

LOVE HARD has great pacing. The action moves along at a quick, easy gallop. Nina Dobrev and Jimmy O. Yang as Natalie and Josh have great comic timing and showcase the hearts of their characters in the more dramatic scenes. The movie does a good job of increasing the stakes. So, although many seasoned moviegoers might guess the ending, it won’t deter them from enjoying the story and the movie’s sweeter, more dramatic moments.

LOVE HARD has a mixed worldview with Romantic, moral elements, and other worldview content. The plot centers on one’s desire to have a significant other. Along the way, characters learn the value of liking someone for who they are and coming together as a family. LOVE HARD stresses being honest with the people you love and apologizing for wrongdoing, which ultimately wins out in the movie. Since the movie’s set during Christmas, it has some strong, overt Christian elements and even some pro-capitalist sentiments. However, the movie’s positive messages are marred by lots of foul language, including some strong profanities, crude references to sex, and some substance abuse. Also, there’s some politically correct content, substance abuse and some homosexual references.