"Romantic Love as the Ultimate Ideal" 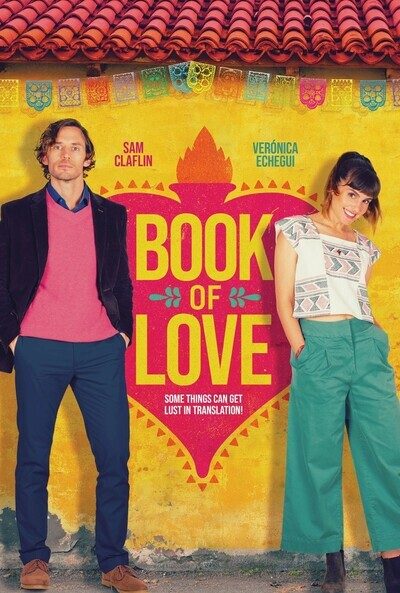 BOOK OF LOVE is a romantic comedy on Amazon Prime. Henry is an unsuccessful British novelist whose new book becomes an unexpected bestseller in Mexico despite lackluster sales. He travels to Mexico to set up a book tour. Henry wants to meet his translator, Maria, who took creative license with his book. She not only translated it into Spanish, she also rewrote the plot and characters to create a steamy and compelling storyline. The two discover what true love is in the pages of a book and with each other.

Veronica Echegui delivers a great performance in BOOK OF LOVE as Maria, a housewife facing many obstacles. Similarly, Sam Claflin as Henry does a great job depicting a lonely man who writes about love but has never experienced it. The beautiful cinematography takes viewers on a virtual tour of London and Mexico. That said, BOOK OF LOVE has a strong Romantic worldview with humanist elements. It glorifies adultery and contends that love and sex can meet all our needs, without God. BOOK OF LOVE also has some brief, strong foul language and nudity.

(RoRo, H, Ho, LL, V, SS, NN, A, MM):
Dominant Worldview and Other Worldview Content/Elements:
Strong Romantic worldview with some humanist elements of attaining love despite the cost, living for self and doing what makes you happy even if it compromises your ethics or morals, plus a positive stance on homosexual behavior
Foul Language:
Seven obscenities (including one “f” word), five or six profanities and one scene where a woman makes an obscene gesture
Violence:
Light violence including one scene of a husband chasing a man, and the man throws a book at husband’s head and knocks him to the ground
Sex:
Two unmarried people are depicted having fornication, two scenes of a person reading a graphic love scene out loud, adultery is glorified, and homosexuality is viewed in a positive light
Nudity:
One scene shows a woman’s bare breast, several people send a writer pictures of themselves in a towel or lingerie, several depictions of a romantic novel cover with a woman’s cleavage exposed, and a nude man and woman share a passionate embrace
Alcohol Use:
Several scenes of adults drinking
Smoking and/or Drug Use and Abuse:
No smoking or drugs; and,
Miscellaneous Immorality:
Strong miscellaneous immorality such as greed, lust, revenge, and exploitation.

BOOK OF LOVE is a romantic comedy on Amazon Prime about a British author and his Mexican translator, who transforms his novel into a torrid romance and a bestseller. BOOK OF LOVE is well paced, with some good acting and cinematography, but it has strong foul language and brief nudity, glorifies adultery, and contends that love and sex can meet all our needs.

British writer Henry Copper (Sam Claflin), tries to change readers’ perspectives on love in his new book, THE SENSIBLE HEART. While he believes not every love story has to be about sex, his fan base believes otherwise. As frustrated bookstore owners tell him to “get a real job,” he gets a message from his publisher that, despite many negative reviews, his book is a number one bestseller in Mexico. However, Henry quickly realizes the book has been translated into a scorching romance novel, rather than the practical love story he intended.

Henry wants to meet the translator of his book, Maria, so he goes on tour in Mexico. Maria, while caring for her grandfather and her son, Diego, escorts Henry to numerous book signings on the tour and translates for him.

During a large event, she must translate the book for the audience and Henry. When Maria retells a torrid love scene in the book, Henry is appalled. After they disagree, they want to part ways, but their Spanish publisher convinces them to work together for the sake of making the book a success and putting money into both their pockets. As Henry builds a following, the book is re-released in the U.K as the Mexican version.

On their last stop on Henry’s book tour, he learns that Maria is a budding author herself. However, because of life circumstances and her own wounds involving love, she will never realize her dream of experiencing true love or being an author. Having a deadbeat husband and father who’s never there for her or her son, she expresses her jaded views to Henry. It’s through this personal exchange with Maria that he understands even jaded love is better than never experiencing love at all. In Henry’s words, “Love is at the heart of everything. It is the one thing we are all searching for.”

BOOK OF LOVE has an overarching romantic tone. So, romantic love is the ultimate ideal everyone wants to attain. Sex and love are often intertwined in the movie. In fact, many of Henry’s fans say his book has changed their lives, and they are now filled with desire and passion for sexual relationships. Because of this, BOOK OF LOVE sends a similar message as books like FIFTY SHADES OF GRAY, that love and sex meet every need in our lives, without God. There is one Christian reference in BOOK OF LOVE about Henry’s father being a missionary. Other than that, however, God is completely absent from the movie, apart from taking the Lord’s name in vain.

BOOK OF LOVE is well-paced. Also, Veronica Echegui delivers a great performance as Maria, the housewife facing many obstacles. Similarly, Sam Claflin as Henry does a great job depicting a lonely man who writes about love but has never really experienced it.

The cinematography in BOOK OF LOVE is gorgeous. For example, many scenes are filmed along the small back roads of Mexico. Also, the first few scenes of Henry’s hometown of London are equally breathtaking. These scenes are often shot with Mexican music in the background. All this adds to the viewing experience. Viewers will feel as though they are in Mexico or London along with the characters.

Having said this, this is a movie where parents and Christians need to exercise extreme caution. There are several scenes describing passionate love scenes written in a book (one scene involves offensive language). Also, alcohol is consumed several times. Foul language is also used as well as a scene of sexual intercourse. There are also other underlying issues with morality in BOOK OF LOVE, including greed, revenge, lust, and exploitation. Because of these issues, MOVIEGUIDE® finds this movie unacceptable.