"Marred by Depressing Last Scene and Other Bad Content" 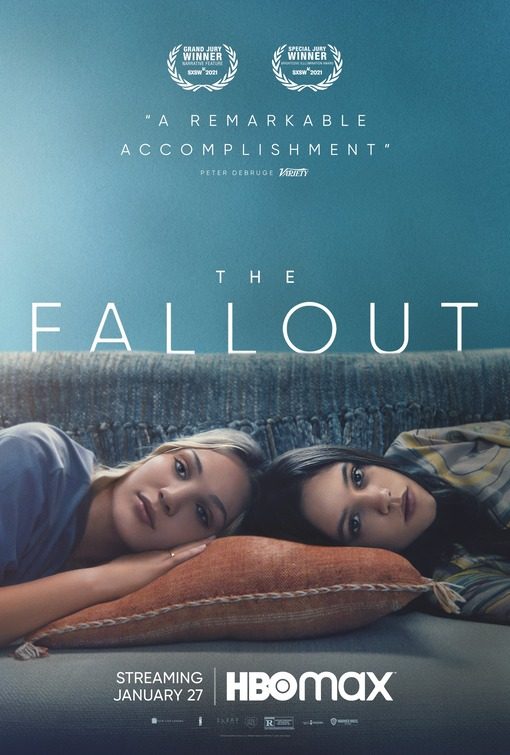 THE FALLOUT follows Veda, a spunky tomboy enjoying her teenage years. Veda is a bright, intelligent student from a loving family. They have sit-down dinners every night. Then, she and a friend, Mia, are traumatized by a school shooting. They see a boy die in front of them. After this horrific incident, Veda becomes numb. The only person who seems to understand is Mia. Veda and Mia begin spending everyday together, trying to overcome their pain through alcohol, drugs and eventually sex, but none of these activities relieve their trauma. Will they be able to move beyond their pain, fear and trauma?

On Netflix, THE FALLOUT is beautifully shot, with dynamic characters, character development and acting. However, THE FALLOUT falls short as it unfolds into a movie with no solid hope or redemption. It also has a strong pagan worldview where everything goes, and where parents let teenagers get away with bad behavior. Finally, THE FALLOUT contains excessive foul language, teenage substance abuse, some bloody violence, sexual immorality, homosexual references, and a depressing last scene. Media-wise viewers will want to avoid this movie.

(PaPa, HoHo, Ro, LLL, VVV, SS, AA, DD, MM):
Dominant Worldview and Other Worldview Content/Elements:
Strong pagan worldview, teenage girl is raised in a family with no religious beliefs or prayer as a source of comfort, teenage girls’ parents are worried when she starts to drink, smoke and engage in sex, but she’s never scolded or grounded for these actions, essentially “anything goes” in the house, another teenage girl has no active parents (her homosexual fathers let her do anything, including drink and smoke, as a solution to her pain), the entire film seems to take an agnostic approach to the situation, one redeeming scene of a memorial is held in a church for some children who were shot, but the main characters attend the service briefly and don’t bother with church as a source for healing their pain, minor Romantic worldview depicts the shooter as being controlled by emotions not logic
Foul Language:
At least 31 obscenities and several profanities
Violence:
One scene of a teenage boy getting shot and blood spewing out of his chest, blood spills all over the ground as the sound of gun shots fire in the background, this scene is very intense and could easily be traumatic for a pre-adolescents and teenagers watching
Sex:
Depicted sexual promiscuity, two teenage girls make out, two high schoolers kiss, implied fornication between teenage girl and teenage boy, and images of a teenage girl dancing provocatively
Nudity:
No nudity
Alcohol Use:
Teenage girls casually sip on wine in a few shots, teenage girls get drunk on wine and make out due to drunkenness, mother drinks a glass of wine when feeling stressed
Smoking and/or Drug Use and Abuse:
No tobacco smoking, but teenage girls smoke marijuana and get high, plus teenage girl takes an illegal drug at school to numb her pain and gets high; and, Miscellaneous Immortality: Strong miscellaneous immortally includes a teenage girl is being raised by two fathers, and there’s heavy PTSD and trauma inflicted in students’ life due to a school shooting.

THE FALLOUT is a high school drama on Netflix about the aftermath of a school shooting on a 16-year-old girl who was enjoying her life but witnessed a boy dying from a gunshot wound.

The movie follows the life of Veda, a 16-year-old girl enjoying her high school years. When her younger sister, Amelia, sends her a desperate text in the middle of class, Veda asks to use the bathroom so she can call her sister to see what’s wrong. Veda enters the women’s bathroom and calls Amelia who is in tears because she’s just started her period. Veda, blunt and full of jokes, pokes fun at her sister. Then, her nurturing big sister side takes over, and she tells her everything is going to be okay. Right then, Mia, a popular girl, enters the bathroom. Veda watches in awe as she applies more makeup to her already made-up face. The two girls are a stark contrast, their clothing choices and personalities reveal two girls who would never be friends. Then, in the blink of an eye, gunshots are fired.

Veda and Mia race to a bathroom stall and hide in it together. They are terrified as more gunshots and screams are heard outside the bathroom door. Another student enters the bathroom to hide. When he sees Mia’s earring on the ground, he realizes there are other people in the bathroom hiding. He slides under the stalls to join their stall. He stands up and explains how afraid he is when his shirt is revealed. It’s covered in blood. The camera zooms out and reveals mounds of blood surrounding him. More gun shots are heard as Veda and Mia become paralyzed with fear by the site of this young boy, who has been shot, now dying in front of them. Veda starts convulsing, and Mia throws up. The scene fades out, and then the aftereffects of this traumatic event begin.

The trauma from the school shooting causes Veda to fall into a depression. All she wants to do is sleep and watch Reality TV. She begins to isolate herself from her family and spends most of her days wallowing through life. She withdraws from her best friend, Nick. While Nick has decided to speak up and advocate about this disaster, Veda is unable to find any words to say. She reaches out to Mia, and the two girls form an unlikely friendship. Both are terrified to return to school and have parents who allow them to stay home until they feel ready.

Veda and Mia start spending every day together. They go through a series of different substances to try to feel better including drinking wine, smoking marijuana and engaging in sex together. However, nothing feels the hole of fear and terror that surrounds them daily.

After Veda’s parents decide it’s time for her to return to school, she really begins to spiral. She pees on herself at school, too afraid to enter the bathroom stall. Then, she decides to buy Ecstasy to numb her pain. She gets so high, Nick is forced to take her home because she can hardly stand. Her parents set her down for an intervention and beg her to talk to them. Since she refuses to do so, they put her in therapy. Veda prides herself on being chill and being able to cope on her own, but the therapist informs her that it’s important to feel her emotions.

Angry and still upset, Veda turns to Quinton, the brother of the boy who was in the bathroom stall with her. Veda kisses him, but Quinton pulls back, informing her he’s going through too much to pursue a relationship. Embarrassed and ashamed, Veda returns to hang out with Nick, but he’s too frustrated and hurt by her for always ditching him and then putting him in a situation where he was forced to carry her home after she did the Ecstasy. Veda leaves, feeling even more alone. She withdraws from Mia and begins to return to her depressive state.

That night, Amelia gets in bed with her older sister. She cries to Veda, revealing that she blames herself for Veda becoming like this because she told Veda to go to the bathroom and call her. Veda assures Amelia it’s not her fault, and she’s not mad at her young sister.

After seeing the world through Amelia’s perspective, it helps Veda to start being more honest with her emotions. Veda reconnects with her parents. She apologizes to Mia for distancing herself and accepts the fact she and Nick might not ever be friends again. By her next therapy session, she feels better as she’s chosen to feel her emotions and be more honest about her pain.

By the end, the audience believes Veda has healed. Then, in the last scene, she receives a news alert on her phone that there has been a school shooting in Ohio. While this shooting has happened states away, Veda spirals into a panic attack, as the movie depicts how cruel PTSD can be.

The production quality in THE FALLOUT is superb. Every scene is beautifully shot with excellent lighting, emotional close-up scenes, and a set design that feels wonderfully unique to each character. The main characters are dynamic and wonderful to watch. Jenna Ortega as Veda and Maddie Ziegler as Mia do a fantastic job portraying the range of emotions that come when one experiences trauma. In fact, it’s the character development that deserves the most praise here. Veda’s young sister, her parents and even her therapist are well-rounded and cast so well that it may feel like you know these people.

However, THE FALLOUT falls short as it unfolds into a movie with no solid hope or redemption. It also has a strong pagan worldview where everything goes, and where parents let teenagers get away with bad behavior. Finally, THE FALLOUT contains excessive foul language, teenage sexuality, teenage substance abuse, some excessive bloody violence, homosexual references, and a depressing last scene. Media-wise viewers will want to avoid this movie.